Get your boots on and tell your islands to expect to get tapped on your own turn for once, because Ixalan is about to unleash wave after wave of wet warriors and watery wizards all over Standard. The scourge of so many formats before it, the traditionally low-casting cost tribe of Merfolk is known for two things: Great lords, and ridiculous synergy. Let's take a swim through memory lane, shall we?

Fish as an archetype is pretty deadly in Modern. It uses (or should I say abuses?) low-cost lords like Lord of Atlantis, Merrow Reejerey, and Master of the Pearl Trident to buff an army of low-cost creatures and end the game quickly by swarming in with a school of unblockable attackers. Spreading Seas and Silvergill Adept help generate card advantage, all while Aether Vial churns out more fish onto the field for free. It's a pretty nasty archetype. One that can leave you gasping for air pretty quickly if you aren't able to start treading water.

My editor has just informed me that I've hit the pun quota for this article, so the rest may be a little dry (That's not a pun, Steve, god!). Fine, whatever, let's just skip to the bad brew.

While Ixalan is bringing Merfolk back to Standard, one thing it hasn't brought with it is lords along the lines of the aforementioned trio. Thankfully, Aether Revolt gave us Metallic Mimic to help pick up some of the slack. This two-drop micro-lord has already seen tons of Standard play, and with the tribal injection brought on by Ixalan, expect it to become a format staple.

The first of the two actual Merfolk lords we have is Kopala, Warden of Waves. Make no mistake, Kopala is a beast. His ability to cause your opponents spells and abilities that target your Merfolk cost two Mana more than they would normally is a huge tempo play, and will essentially force your opponent to either deal with Kopala, dig for a board wipe, or start playing massively over costed removal spells to try to even the odds.

The second 'lord' for Merfolk is Herald of the Secret Streams. While not technically a lord in the traditional sense, Herald makes it so that all creatures you control with +1/+1 counters on them can't be blocked. As far as I'm concerned, it's essentially a way to give our Merfolk Islandwalk without actually giving us Islandwalk.

Curving from Metallic Mimic into Kopala, Warden of Waves into Herald of the Secret Streams suddenly lets a Merfolk player attack for five unblockable damage on turn four, which becomes eight more on turn five - barring a board wipe or over costed spot removal spell on one of the targets. 13 damage that can't be blocked by turn five is pretty good, you guys.  If your opponent can't nuke your field or deal with either of the lords, you probably have that game in the bag.

Supporting the +1/+1 counters theme, we have Jade Guardian and Vineshaper Mystic, both of which allow you to distribute some additional counters onto your Merfolk so you can hopefully get it sooner with more damage. 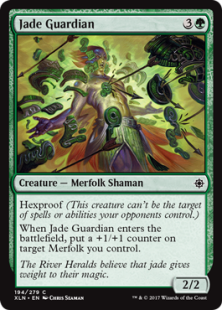 The higher costed of the pair, Jade Guardian, is pretty cool. For four Mana, you get a 2/2 Hexproof body that can either turn itself into into a 3/3, or pump another Merfolk up and out of Lightning Strike range. If you happen to be able to play this guy on a curve that included Metallic Mimic, he can come down as a 4/4 Hexproof for four Mana. Follow him up with a Herald of the Secret Streams, and you've suddenly got a five-turn clock on your hands.

Fish would rather turn sideways and get in for damage with more fish friends than hold up Mana to draw a single card, and in a 'go wide' strategy I feel it's better to get a three Mana body on the field that puts two +1/+1 counters on other Merfolk rather than try to get the same effect for nine total Mana from Shapers. Maybe I'm wrong, but my logic is that if Shapers of the Wild eats a removal spell before it gets to do anything, it was a three Mana investment that has nothing to show for it. If Vineshaper Mystic eats a removal spell, at least you got to pump some other fish. 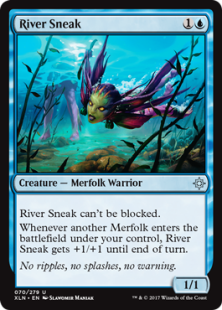 A two mana 1/1 that can't be blocked is pretty okay, but the fact that he gets +1/+1 each time another Merfolk enters the battlefield can mean that one of these guys who goes unchecked is going to be whittling away at your opponent's life total faster that they can say, 'stop attacking me with Unblockable creatures and play some fair Magic'. A turn three play that includes one of these guys and a Shaper's Sanctuary after a Metallic Mimic essentially tells your opponent that while you have heard their opinion, you want nothing to do with it and plan to be Lightning Bolting them with a fish every turn until they die.

The final creature I want to mention on this list actually isn't a Merfolk at all. Armorcraft Judge isn't even from Ixalan, but I have a feeling his ability to let you draw a card for each creature you control with a +1/+1 counter on it would have him be welcomed warmly by the denizens of the deep.

Unless you're currently recovering from an Hour of Devastation or the like, a turn five or six Armorcraft Judge is likely to draw you three or four cards. Of course, this depends entirely on the sequence of play that's led up to you playing the Judge, but the power of the synergy between him and cards like Metallic Mimic and Vineshaper Mystic is pretty apparent.

Speaking of cards that give +1/+1 counters and let you draw, Implement of Ferocity is great in this list. As a turn one play, it can hang out on the battlefield until you need to crack it. Once popped for a single green mana, it puts a +1/+1 counter onto one of your Merfolk and lets you draw a card. 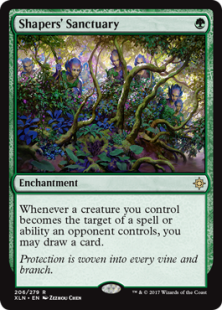 Also costing one green mana in this list is Shaper's Sanctuary. While Kopala is going to discourage your opponent from targeting your Merfolk with removal spells, Sanctuary is going to reward you for when they inevitably have no choice but to do so.

Rounding out the list, Heroic Intervention will save your wall of fish from every board wipe that isn't Hour of Devastation or Yahenni's Expertise, and River's Rebuke fully resets your opponent's board and lets you swing at it with your fish at leisure while they try to get a board state going again.

While I'm not convinced that they belong in the main board, I think they definitely belong in the sideboard to pull out when needed. If only Siren Stormtamer had been a Merfolk... Maybe there's a reason to play Arcane Adaptation after all. Add in a couple more Heroic Interventions to deal with board wipes and some Negates to deal with everything Heroic can't, and you've got yourself a sideboard. 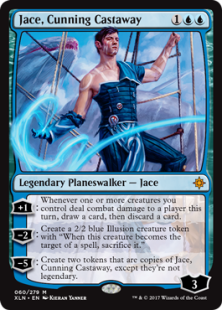 Of course, I couldn't not include a couple Jace, Clever Castaways. His ability to add looting to what is pretty likely to be a bunch of Unblockable creatures is pretty awesome, but unless you're in a grindy matchup that requires you to be filtering all those draws, I feel like the three mana is almost always better spent on Kopala, Warden of Waves. If he had been given an ultimate that could actually win you a game, I would have him in the main board. Unfortunately, he does not.

That about wraps it up for this edition of Brewing with Ixalan. We have just a few more days until Prerelease, and I can't wait to see what other kinds of decks we'll be seeing hit Standard once Ixalan is officially released!