Pyromancer's Goggles is back, this time in the form of Primal Amulet. Did I specifically combine it with Enrage cards so that I could make a deck called 'Primal Rage' full of dinosaurs and fiery death? Yes, yes I did. All that aside, does it have a chance as an archetype once Ixalan hits? I definitely think so.

Do you remember the Primal Rage video game from the 90's? I sure do. It's a classic fighting game where players choose their characters, and proceed to beat the bodily fluids out of their opponents. Oh, and all the characters are Dinosaurs. It was seriously awesome to be able to lay the smack down on your opponent as a giant T-Rex, savagely tearing and burning your opponent into nothing but a large pile of scorched meat chunks. Thanks to Ixalan, we now get to do that to people in Magic as well. There's a bunch of puns I could make, but I'm just too way excited, so let's cut straight to this week's bad brew:

Primal Amulet is an all around neat card. Not only is it half Pyromancer's Goggles, it's also half Thing in the Ice, in the sense that it needs you to have cast four Instant or Sorcery spells in order to flip it over and acquire maximum levels of awesomeness. While the downsides to the card are that it costs four Mana and that it all it does initially is reduce the Converted Mana Cost of your Instants and Sorcery spells by one Mana, the upsides are that it isn't Legendary, and that it becomes a Land when it transforms - a card type that's much more difficult to destroy than an Artifact. 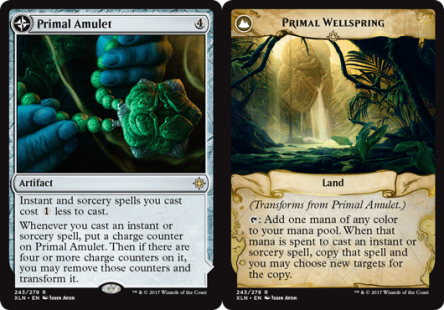 Once you Transform it, Primal Amulet becomes Primal Wellspring, and that's when the bodily fluids start flying. Some of it will hit the fan, some will drip down to the floor. Some will go from the windows, to the walls (to the walls). You get my point, and hopefully understood that reference.

Knowing that the goal is to Transform a small necklace into a lush waterfall by casting four spells, this list is running a hefty 24 Instant and Sorcery cards. Tormenting Voice and Cathartic Reunion help us smooth out our early turns by letting us get rid of what we don't need while digging for what we want, whether that's in the form of dumping extra land for more removal, or vice-versa. If we're able to get even one Wellspring online, those cards suddenly become insanely powerful draw spells. For example, the following graphic shows exactly what happens when you cast Tormenting Voice with zero Wellsprings, one Wellspring, or two Wellsprings:

Make no mistake, if you were to copy the spell twice (i.e., by paying for it with two Primal Wellsprings for some reason) you would discard ONE card in order to draw a total of six. The way that rules are structured within Magic say that when you copy a spell, you cannot do things like change the modes of a modal spell, or change the way the additional casting costs have been spent. This means that, in essence, if you cast Tormenting Voice with at least one Wellspring, you discard one to draw four. That's bonkers. What's even more bonkers is the following conversions:

Let's be honest, you guys - Being able to deal nine damage to an opponent at Instant speed for two Mana is beyond broken. You hear talk and complaints about 'power creep' in Magic, but Lightning Strike'ing someone for nine damage is not something that should happen, period. Unless, that is, you're playing this deck and are a terrible, terrible person. Or just like doing janky things with janky decks - You decide!

In my last article, we talked (Okay, I talked, you just had your inner monologue hijacked by my words) about the sweet interaction between Ripjaw Raptor and Sweltering Suns. Namely, deal three damage to everything and draw a card for three Mana. While you'll still get to draw a card, it's pretty safe to assume a Ripjaw Raptor is not going to survive through the damage output you get with Sweltering Suns if you use one, two, or three Mana from Primal Wellsprings. Now, I'm not sure what scenario in Standard you'd run into where you'd need to be doing 12 damage to each creature, but I can certainly imagine needing to do six damage. By the time you're doing nine or 12 damage, you're practically casting Fumigate without the life gain.

I'm not going to break down all of the multiplications visually, because it gets a little redundant. Cathartic Reunion can draw you as many as nine cards, while Hour of Devastation can do as much as a whopping 80 damage to all creatures and any Planeswalkers that aren't Nicol Bolas, God-Pharaoh. You'll probably never need to do it, but let's be honest - just knowing that you can is good enough.

Finally, here's the reason you should give this deck - or the inevitable UR version - a try: 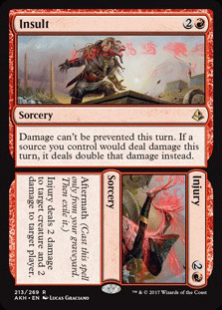 Basically, this card can win you the game. Insult // Injury doubles the damage you would deal. Three damage from a Lightning Strike becomes six damage, and so on. The real kicker is if you cast multiple copies of Insult using the Primal Wellspring. Double that double, or double your doubled double. If you're extremely lucky, you can double double your doubled double.

Have you ever said a word so many times it starts to lose all meaning, and then the darkness around you starts to close in until you're all alone with your existential dread?

Yeah, uh, me neither.

The point I was getting to is that if you can cast an Insult // Injury with one or two Primal Wellsprings online, you should be able to turn your opponent into those hunks of scorched meat we talked about earlier. Two copies of the Insult effect in play makes a single Lightning Strike deal 12 damage. Three - or two and a copied Lightning Strike - makes it deal 24 damage. That kind of damage output is comparable to what Scapeshift does to people in Modern!

To wrap things up, let's take a look at the sideboard. Burning Sun's Avatar isn't Inferno Titan. I know. Everyone knows. That being said, it is a 6/6 that does three damage to both a creature and our opponent, which can help you close out the game in certain match ups. Also, it's a red T-Rex in a deck called Primal Rage - it HAD to happen. Shock and Abrade are here to help slow down aggressive decks with little creatures, while Abrade gives us extra artifact removal if needed. Shock can help add that extra bit of damage when needed, but can only be copied a total of once with Primal Wellspring.

Hour of Promise is here to help fix any ramp problems you might be facing if your Ranging Raptors aren't doing enough work, and Heroic Intervention can turn your Sweltering Suns into a one-sided board wipe and let you swing in with your Dinosaurs. If pesky control decks keep ruining your fun, Nissa, Vital Force can help you recover lost permanents, and give you some extra power on the board when needed.

Well that about does it for this week's edition of Brewing with Ixalan. I hope you enjoyed reading this brew, and can't wait to see what else Ixalan brings us!