Bring Your Banned Cards to Commander

Standard has had a rough go of it recently with what feels like constant ban lists updates. Luckily for all of us, every card that has been banned in Standard also happens to be legal in Commander! So why not bring your banned cards to Commander? Let’s go through each card and suggest some possible Commander decks they slot into and how they fare in the format we love! 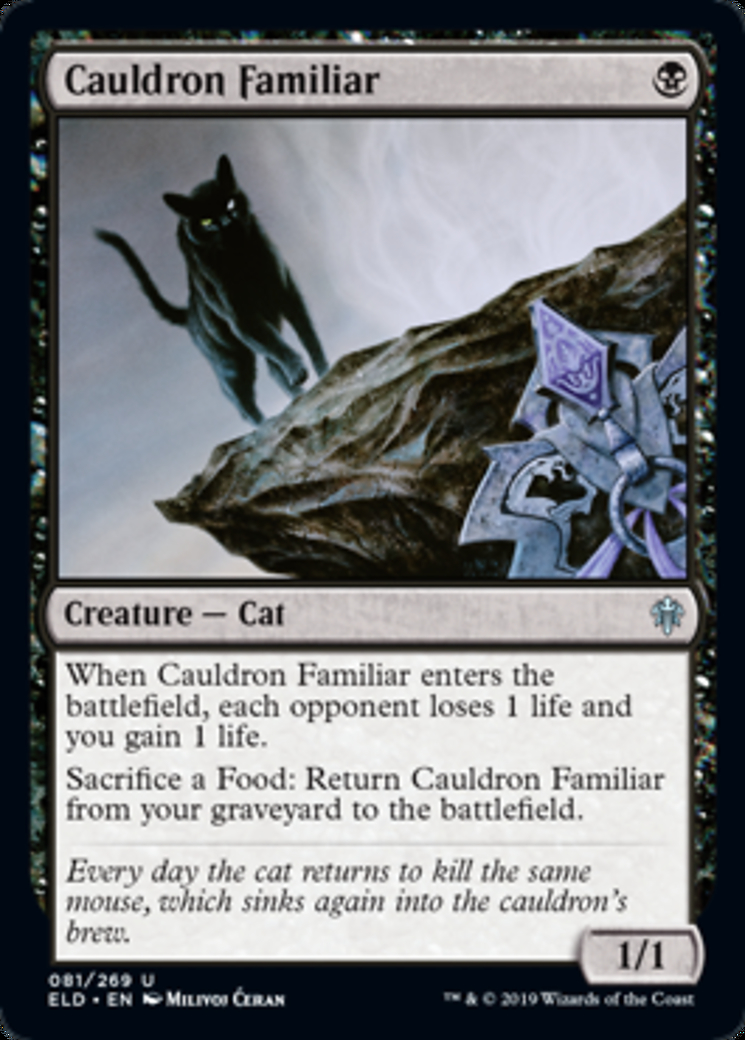 Our favourite Cat is back and will never die again! When looking at Cauldron Familiar immediately, one can easily see it being played in some sort of aristocrat deck. For this, the best Commander you would either be Shattergang Brothers or perhaps even Korvold, Fae-Cursed King. Either of these decks are capable of taking advantage of other Food generating cards such as Witch’s Oven, Gilded Goose, or even Feasting Troll King. Either way, you can accomplish a great budget list with enablers from Throne of Eldraine that will surely use some of your extra cards sitting around while giving you an excuse to reunite this card with Mayhem Devil.

Escape to the Wilds 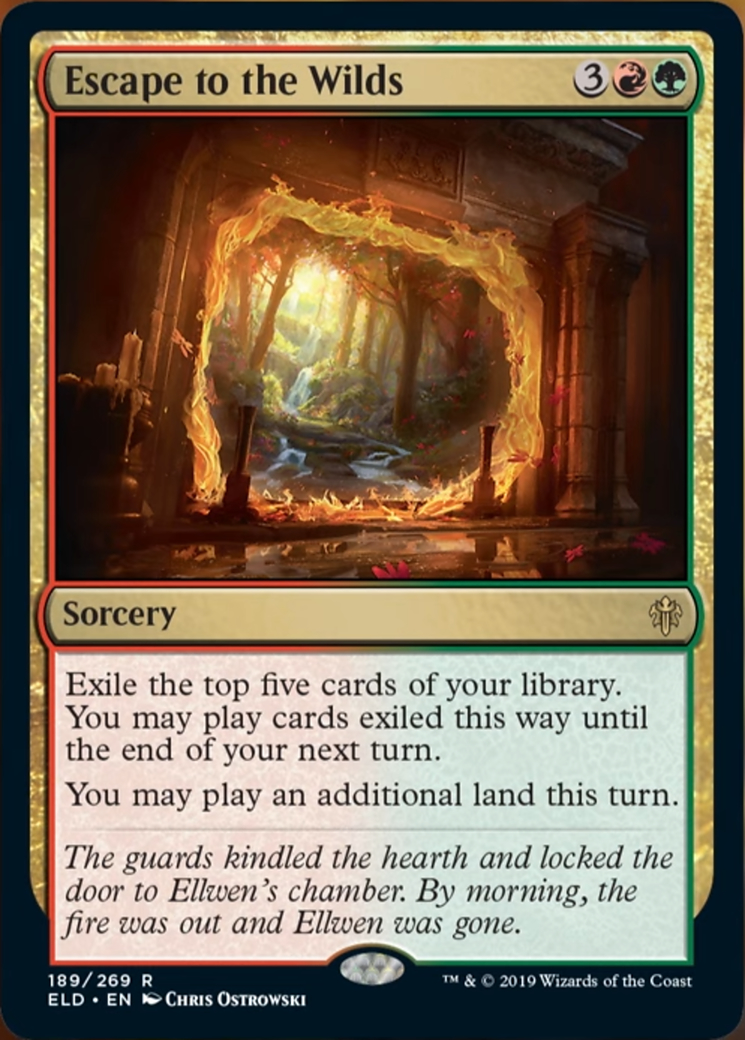 Escape to the Wilds is a strong ramp card that also offers card advantage in Green/Red/x. At five mana, granting an additional land drop as well as five cards is just great and efficient value for most Gruul decks. For maximum effect in the Command Zone, a Temur option of Riku of Two Reflection is an immediate option, but Wort, the Raidmother, Phylath, World Sculptor and Obuun, Mul Daya Ancestor are all decks that would be able to take great advantage of this card. If you have an extra slot, this is one of the best additions in recent years. This is also an incredibly budget-friendly card at less than a dollar per copy at the time of writing. 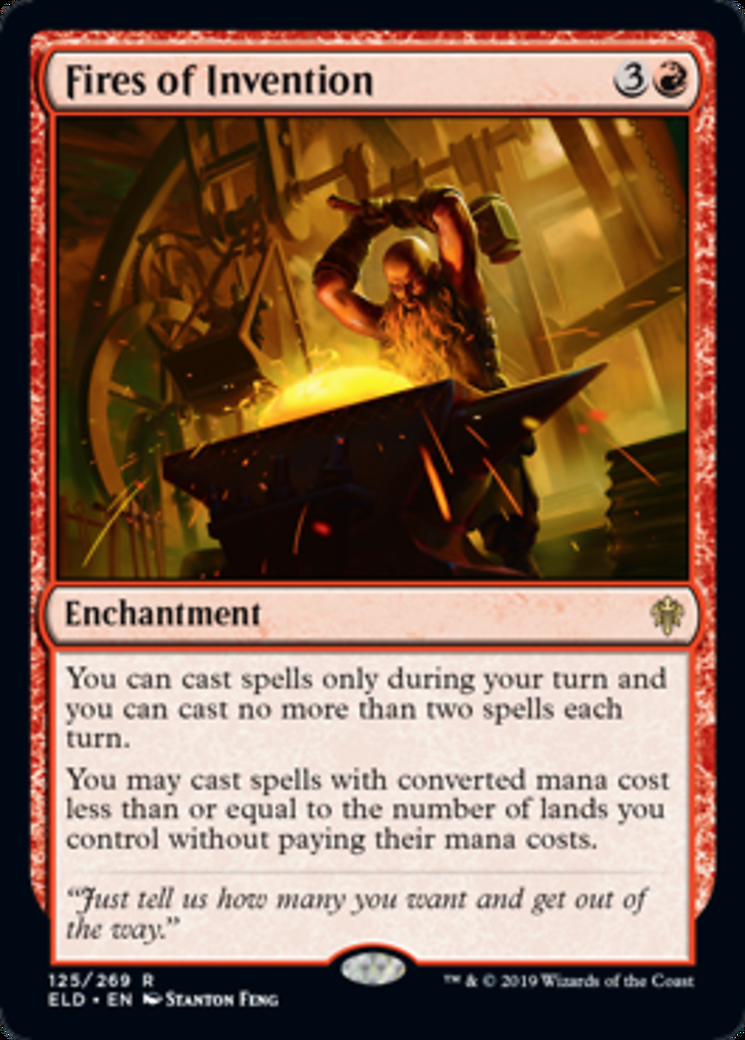 This is one of the easiest additions to tap out control decks in recent years. Fires of Invention is an enabler for decks that mainly wish to play on their own turn with huge game-winning spells. This card allows you to essentially double your mana if not more if you can funnel your mana into something on your opponent's turns. Having this plus an Ethereal Absolution or Profane Procession on the field has been a new favourite of Black/Red/White decks and you can clearly see why. The value that you can gain out of a single four mana enchantment is absurd, especially if you were able to efficiently ramp out additional lands in the early game.

Decks to consider slotting this into would be Queen Marchesa, Sisay, Weatherlight Captain, Kenrith, the Returned King or even the newer Radha, Heart of Keld. Play with the card a few times and you’ll become a believer quickly. As well, since its banning, this card has become less than a dollar at the time of writing. There’s no better time to give it a try! 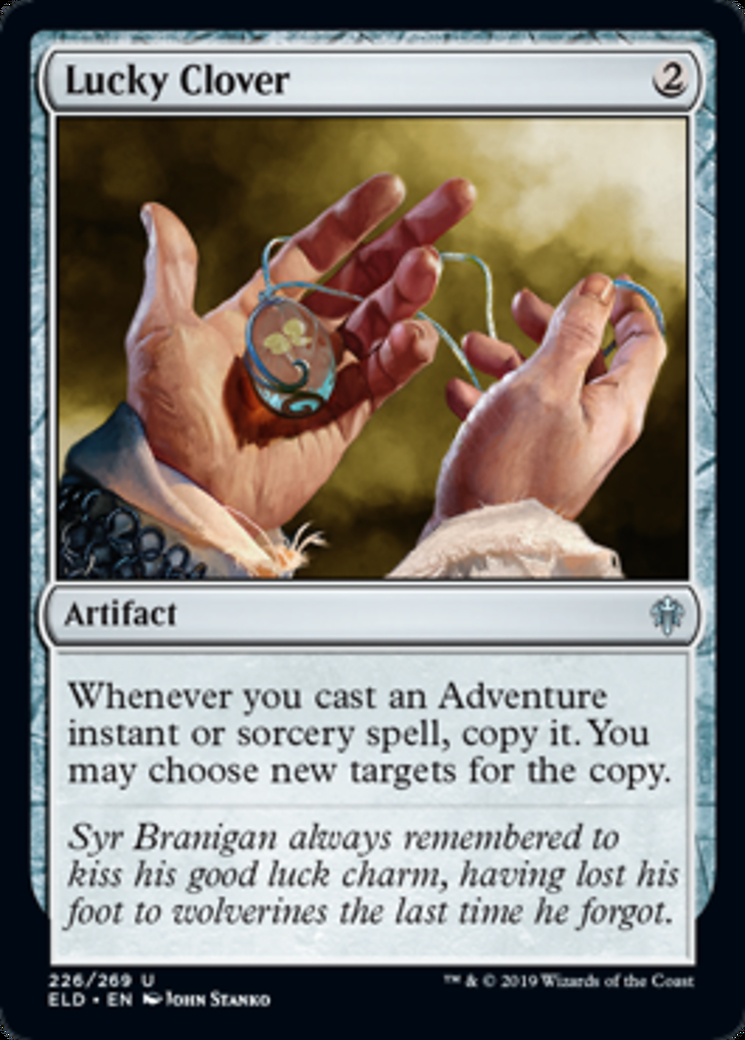 This is certainly the most questionable of the banned cards for Commander. While you could make a tribal Adventure deck with Lucky Clover, there aren’t enough Adventure cards that are powerful enough to keep a deck like that functioning well. If you do choose to try and make that deck work, the suggested Commanders would likely be Kenrith, the Returned King and Golos, Tireless Pilgrim to give you access to all the colours you need whilst also just being objectively powerful cards. This is likely one to give a miss until the Adventure mechanic shows up in another set. Certainly isn’t the worst buy given the history of set specific cards and their enablers if they’re revisited. 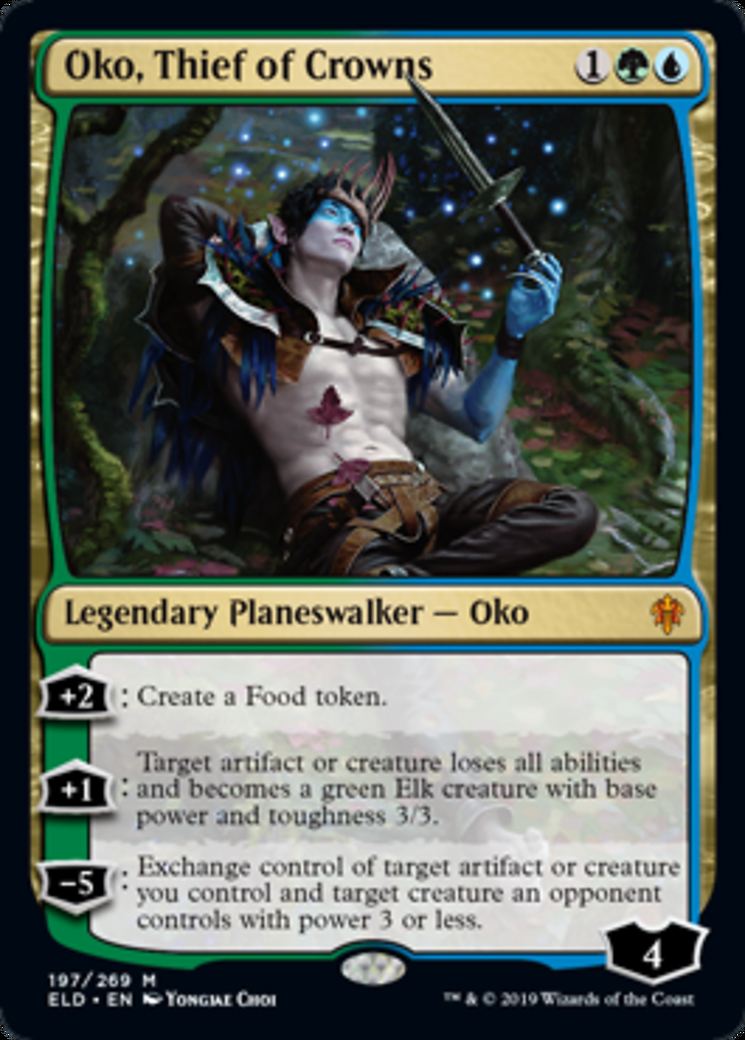 While it hasn’t hit the price many of us would like, the power level of this card is still immense. A three-mana Simic card that offers removal, life gain, and Commander stealing is certainly a huge plus in any Simic Commander deck. The efficiency and resilience of this card is what kept it going in Standard, and will likely keep it going in Commander. Decks that can take advantage of Food Tokens will have an additional love for this card, but Oko, Thief of Crowns can really just slot into any Simic deck you so desire. Some examples for going forward would be Thrasios, Triton Hero, Kinnan, Bonder Prodigy or Kruphix, God of Horizons. 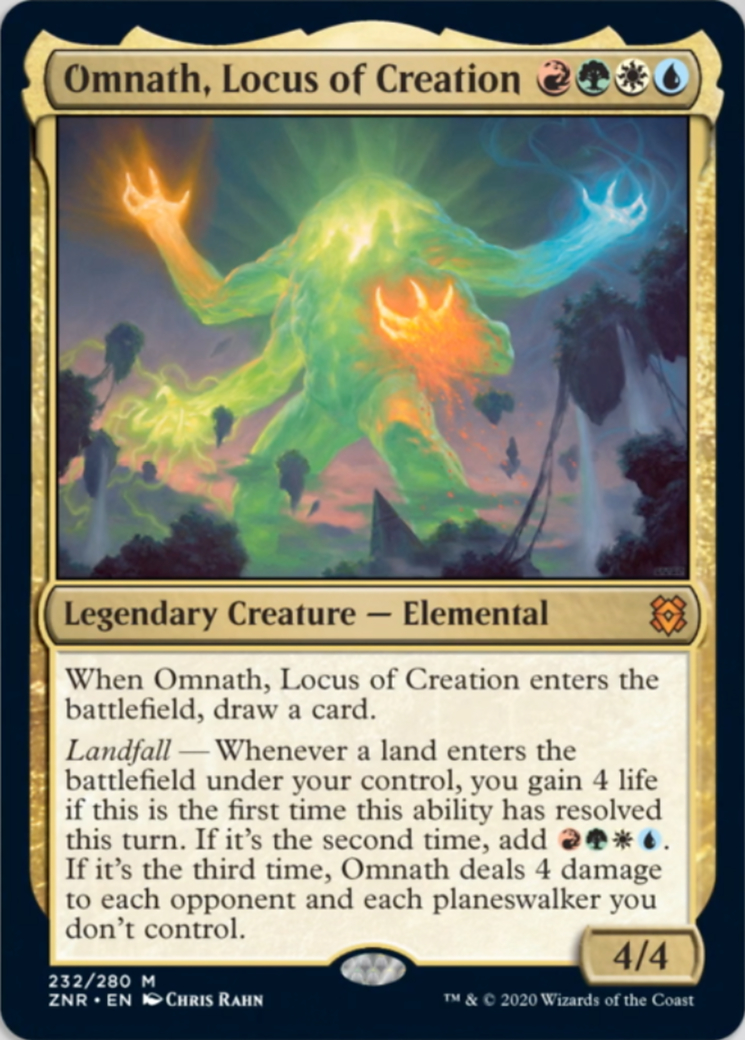 Well, this certainly isn’t the first time we’ve talked about this card here...

This card was wonderful in Standard due to the value it accrued just by entering the battlefield. It gets even better having any sort of second land drop to have explosive turns consistently. The same stands for Commander while also giving access to the four colours that many combo players opt for. This card is its own Commander and likely won’t see play in the 99 of any deck due to its colour restriction, but an argument could be made for being in a Kynaios and Tiro of Meletis deck.

Once Upon a Time 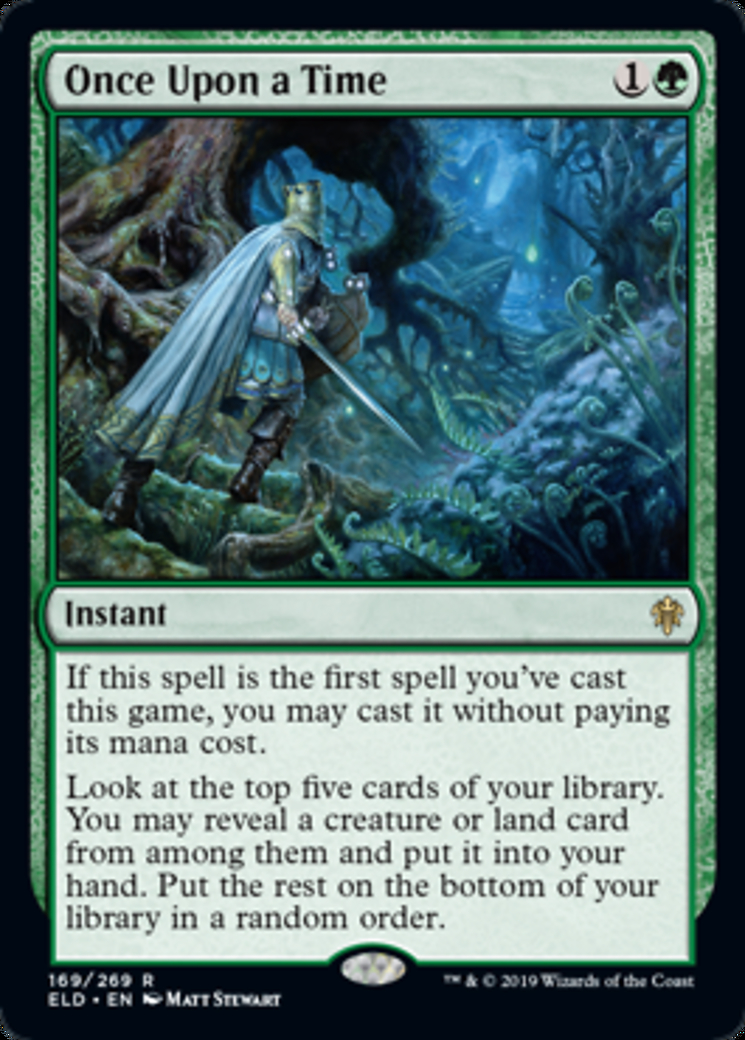 Card selection is certainly something that Green has never had particular trouble with. However, being able to have that for free is certainly an upside. An efficient enough spell to run if you have to cast it for 1G in some decks, but the upside of potentially playing it for free is something that can’t be dismissed. This would certainly be for more early game combo-focused lists as well as opposed to general such as Chulane, Teller of Tales or perhaps Selvala, Explorer Returned. The card has also finally diminished in price since it’s banning, sitting at under three dollars at the time of writing. This is an appealing price for a budget deck that wishes to maintain a higher power level. 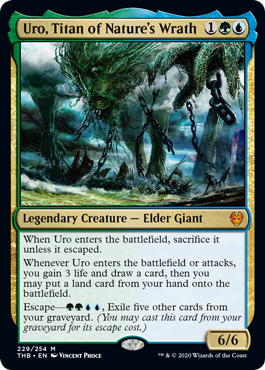 Finally, the bane of basically every format it’s legal in. A three-mana ramp spell at face value that when combined with options such as Crystal Shard or jank like Mirror March, spirals out of control very quickly. Gaining life, drawing cards, and playing additional lands are all independent things that you would like your cards to do. Doing all of this on a single three-mana creature is absurd, especially one that you can so easily recur. With options like Altar of Dementia, Greater Good and Evolutionary Leap that all allow you to sacrifice it before it sacrifices itself, the ability to keep churning through your deck and feeding your graveyard is so easy that it’s almost a joke.

Keeping this card off the battlefield requires dedicated graveyard removal like Rest in Peace or Leyline of the Void which not all players will be running. Even if you don’t run this card in the Command zone, playing it with a Commander like Riku of Two Reflections who can also take advantage of this card makes it even easier to justify getting as many copies as you can. The main caveat with this card comes from its still absurdly high price of $60 CAD. Unless this card sees a reprint, it won't go down in price any time soon. An unfortunate turn of events, but if you have the means and can justify it; this card is excellent.

That’s it for the current Standard banlist in Commander! Some great additions and a couple less than great but certainly not terrible additions. It would be nice for a couple of these to drop in price. However, they’re certainly better than they would be if they were still legal in Standard.

What do you think? Have you already been playing with any of these cards in your Commander deck? Going to try something new next game night now? Let me know in the comments!