One of the greatest things about Magic is that there are plenty of ways to play casually, have fun, and still do really well. Especially in formats like EDH/Commander.

One of my favourite Commander decks that I've built over the couple of years I've been playing is centred around Grixis and Nekusar, the Mindrazer. I've tried my hardest to keep from making it too efficient because I didn't want to become the biggest threat on the board every time Nekusar came out. However, I also wanted to make it difficult to play against. I managed that, but recently some of my friends have come up with some just plain unfair decks and combos. This left me wondering, how was I going to build a better deck to step up my game?

The solution was actually fairly simple. Don't build an entirely new deck, just change my current deck to keep up.

Nekusar, the Mindrazer is all about punishing opponents for drawing cards. If they draw a card, they take a point of damage. Well, how about we amplify that effect by changing up the wheels. Throw in discard effects, add mill to the mix. Using the tools I'll give you today, you too can perform some of the jankier casual moves available in Commander. Just don't come crying to me when you start building a salt mine among your play group.

Unlike my other deck tech articles, I won't be posting a full deck list here for you to copy. Rather, I'll list off the centerpiece tools you'll need to make a deck of your very own! First, we'll be looking at the Commander that makes all of this work: 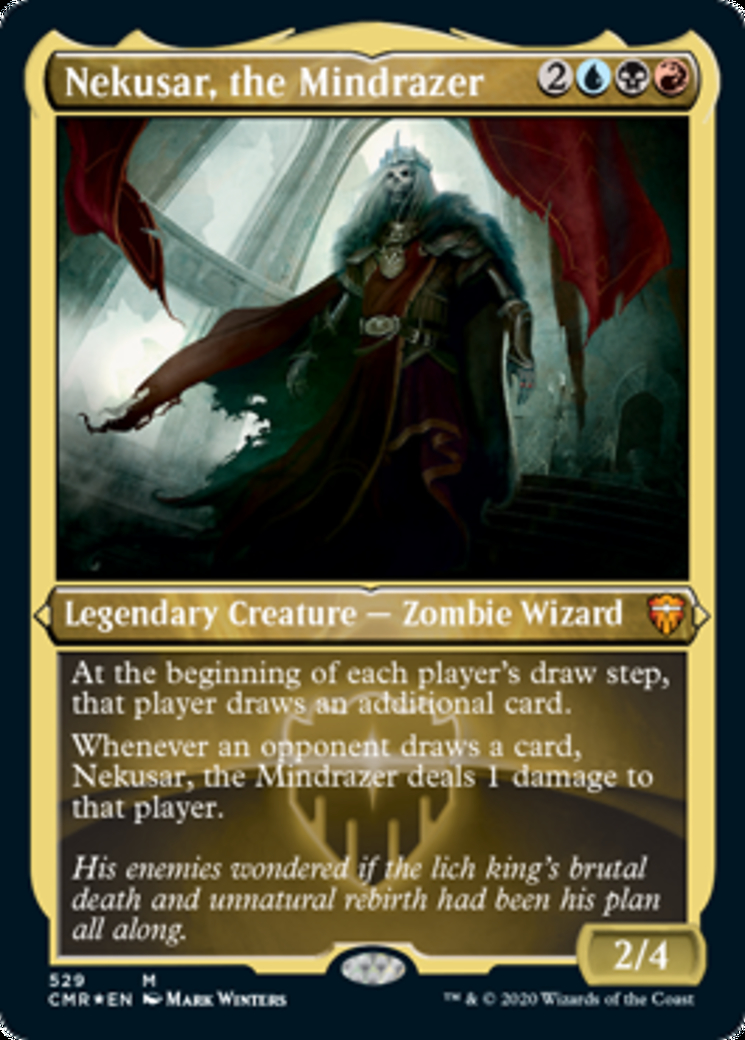 Nekusar is going to be the main raison d'etre here. His main mechanic is that he causes opponents to take a single damage for every card they draw and forces an additional draw on their draw steps. He's also got a pretty decent body, and has a moderate cost so you're not playing him too early and generating hate. Also, he's just a really good Commander in general.

Now, in a Nekusar focused deck, what you're supposed to do is pile on the "wheel" effects. That is, cards that force players to discard or shuffle their hands into their libraries, then draw a large number of cards after. Then you want to finish your opponents off with gradual draw effects like Howling Mine and damage output cards like Fate Unraveler.

That can get pretty janky as it is with cards that suddenly become win conditions, like Prosperity. However, the whole point here is to make this deck way crazier without really adding to the mana base or arbitrarily just adding to the cost by slotting in slightly better versions of spells that are already included. Since there's going to already be wheels in this deck like Wheel of Fate, Dragon Mage, and Jace's Archivist, why not double up on the fun? That's where the next tool comes in. 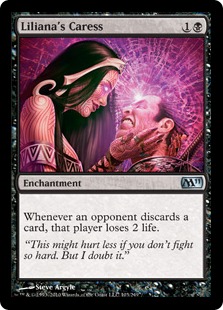 If we're going to find a way to double up on the damage factor here, it may as well be for every card our opponents discard. While this only counts for every card discarded from their hand, this is still a pretty damn deadly way to double the damage every time you play a discard focused wheel. Ramp it up with, say, Megrim or even Raiders' Wake. Or, if you're feeling even saucier, throw in an old classic like The Rack if you plan on slotting in some cards that simply empty hands.

While you're going to be dealing a lot of damage, we're not stopping here. As you might have guessed, we're going to include a mill effect as well. But how exactly are we going to do that with just a card or so? That's easy. While it's not a solid win condition on its own, these next cards just might make the biggest difference between winning and losing. Depending on the decks you're up against, that is... 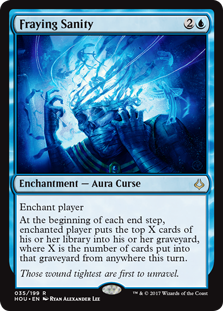 Here it is, folks. The great destroyer.

While you're dealing massive amounts of damage, with these we're looking at just absolutely grinding down and damaging our opponent's deck at the same time. Not only does this pound our opponents' decks straight into the ground, it also makes their decks inherently less effective by letting ours go off.

You really don't need to focus on mill effects. Between those two cards, we'll be doing enough damage to life, deck, and hand, that we won't need to. But if you want to be particularly nasty, throw in a Mind Grind or a Consuming Aberration to make the salt pile extra high.

Beyond this, you're just looking for general utility. You want spells that enable mechanics like wheels that discard as opposed to shuffling into library, draw spells, burn spells, spot removal for artifacts, creatures, and Planeswalkers. You'll probably want to bring some counter spells along for the ride, but that's entirely up to you. This deck just becomes way more effective the more you can answer your opponents, especially when they think they have answers to your plays.

More nice little additions that make this deck extra painful are cards that punish opponents for letting you draw, like Niv-Mizzet, the Firemind orPsychosis Crawler. Nin, the Pain Artist serves as great spot removal for creatures and it enables this Toolchest's mechanics. One of the most punishing finishers in a deck like this, though, is Torment of Hailfire. It pretty much says, if all the setups go well, that your opponent will either clear his field or take damage. Either way, it makes the game easier for you.

Decks you'll need to watch out for are ones that want cards in their graveyard. Nihil Spellbomb is probably the easiest and cheapest way to exile someone's graveyard that also enables this deck's mechanics but you can use a variety of them.

If people are loading up on answers to your deck by playing aggro, or can go wider than you'd normally have answers for, play a board wipe along the lines of Decree of Pain. Or, if you want to play for chump blockers, slot in Grim Haruspex. Last but not least, you really should put Bloodchief Ascension in just for kicks.

I think that just about covers everything! Enjoy your deck building and, as always, may your top decks always be fruitful!