Putting the ‘Command’ in Commander with Strixhaven

In the year 2015 Wizards of the Coast released the spectacular set Dragons of Tarkir adding troves of brilliant cards to Commander. Whether it be fantastic legendary creatures such as Dragonlord Silumgar and Dragonlord Atarka or the new staples like Impact Tremors, this set had a strong impact on Commander. One of the cycles that should always be on your mind while brewing is the Command cycle (Kolaghan’s Command and friends). A modular series of spells with a low casting cost but powerful abilities all around would go on to be easy inclusions in multi colour Commander decks. At the time, the cycle had only been given to the allied colours, as they were the colour pairs that Tarkir had explored in a new dragon world.

Now, with Strixhaven on the horizon the cycle for the enemy colours will finally be complete! Let’s go over the spoilers for the new Strixhaven Commands and see what roles they’ll be playing! 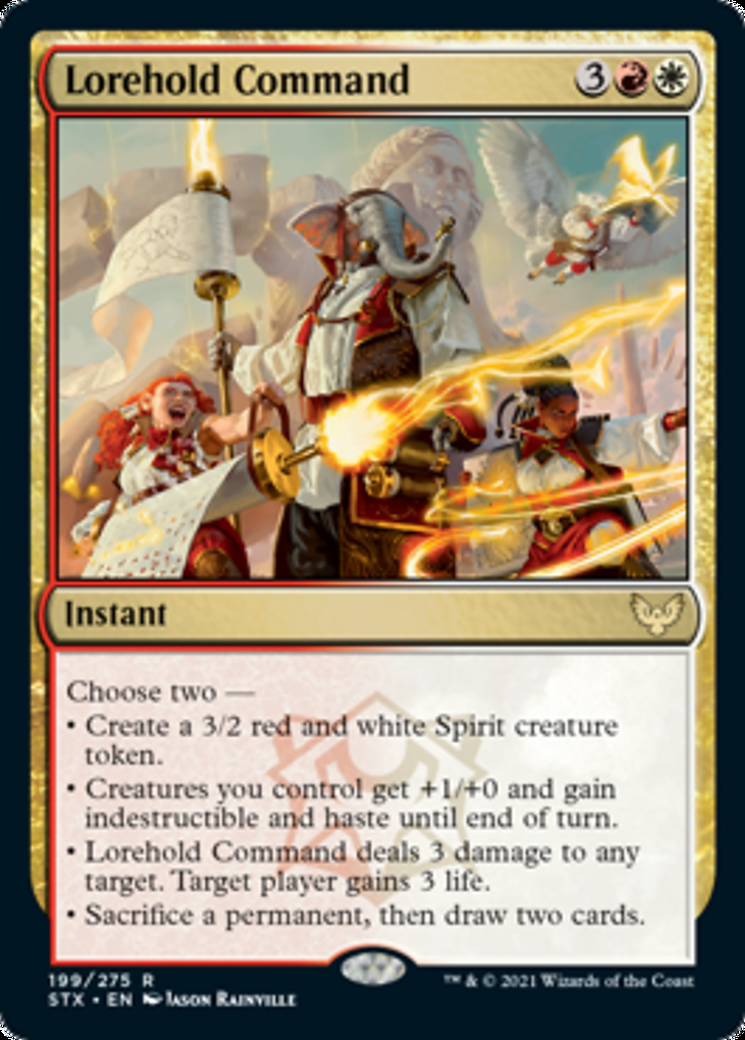 Starting off with the underplayed Red/White colour combo holds the Command with the highest on the curve for this set! An instant speed spell that costs five mana is certainly a high asking price, but the payoffs on the card are surprisingly good. This card acts as instant speed removal, combat tricks, and card selection all in one. Going through the abilities none of them are incredible standouts but the two modes you’ll consider are “Creatures you control get +1/+0 and gain indestructible and haste until end of turn” and the last line “Sacrifice a permanent, then draw two cards.” Starting with the pump/indestructible line, the ability to evade board wipes and grant haste is an often underappreciated effect. Pouring mana and tokens onto the board only to be undone through a Damnation is something that Red/White can’t often recover from efficiently. When this is put in consideration with “Sacrifice a permanent, then draw two cards” you are given the option to protect your board and sacrifice your least useful permanent to replace both that permanent and Lorehold Command itself!

In combination, those two lines are powerful, but the options given through either removal or board presence aren’t to be dismissed. Remember that the power level of these cards comes from the options given. Expect to see this in Red/White/X decks that are looking to go wide through tokens or through singular large creatures. 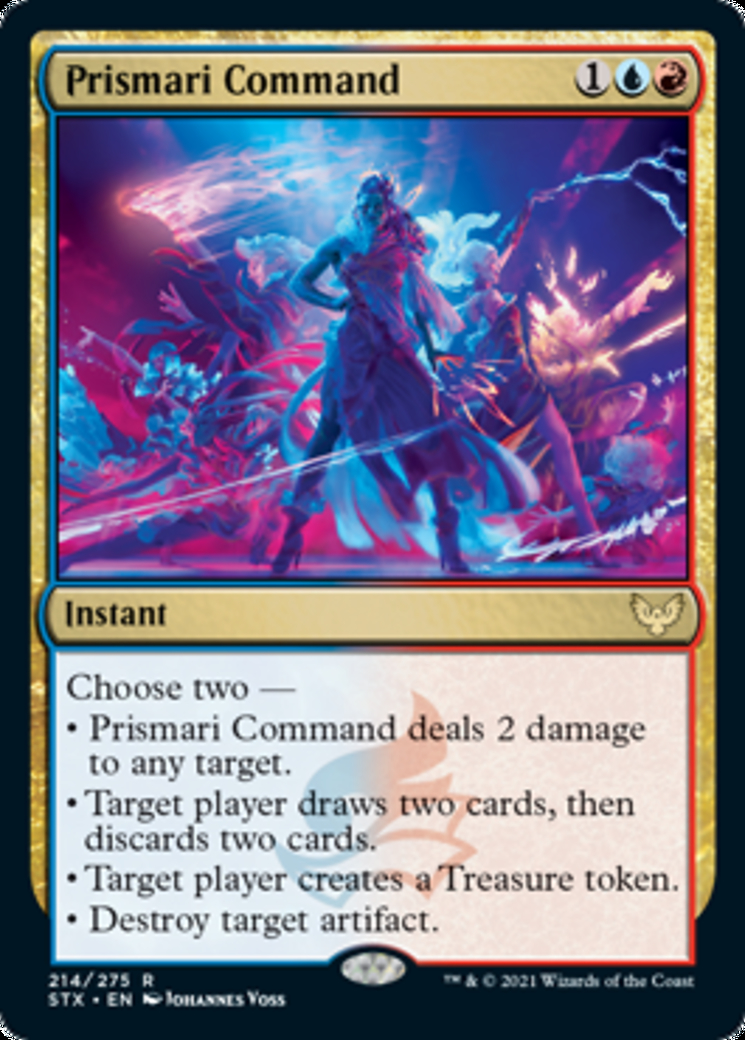 How unfortunate for Electrolyze that this card exists to replace it in the vast majority of decks that would run it. Acting as a bigger version of Izzet Charm, Prismari Command looks to remove two things or offer some more card selection at instant speed. It’s a shame it doesn’t have a counterspell option, but the potential to remove up to two permanents or be an instant speed Faithless Looting does offer the Blue/Red decks options. I would certainly underline the fact that this card doesn’t replace itself on the draw two then discard two as it is card disadvantage but if your deck offers various ways to interact with your graveyard or would already be running Faithless Looting, then this mode will be right at home.

Unfortunately this card will likely not be as ubiquitous as some of the other Command options due to the low damage output it offers and lack of card advantage but the fact it cleanly destroys an artifact might bring it back into a higher power level as there rarely isn’t a target for such effects. Expect to see this in Blue/Red/X spellslinger decks that focus on instant speed or card selection such as Kalamax, the Stormsire, Niv-Mizzet, Parun or Melek, Izzet Paragon 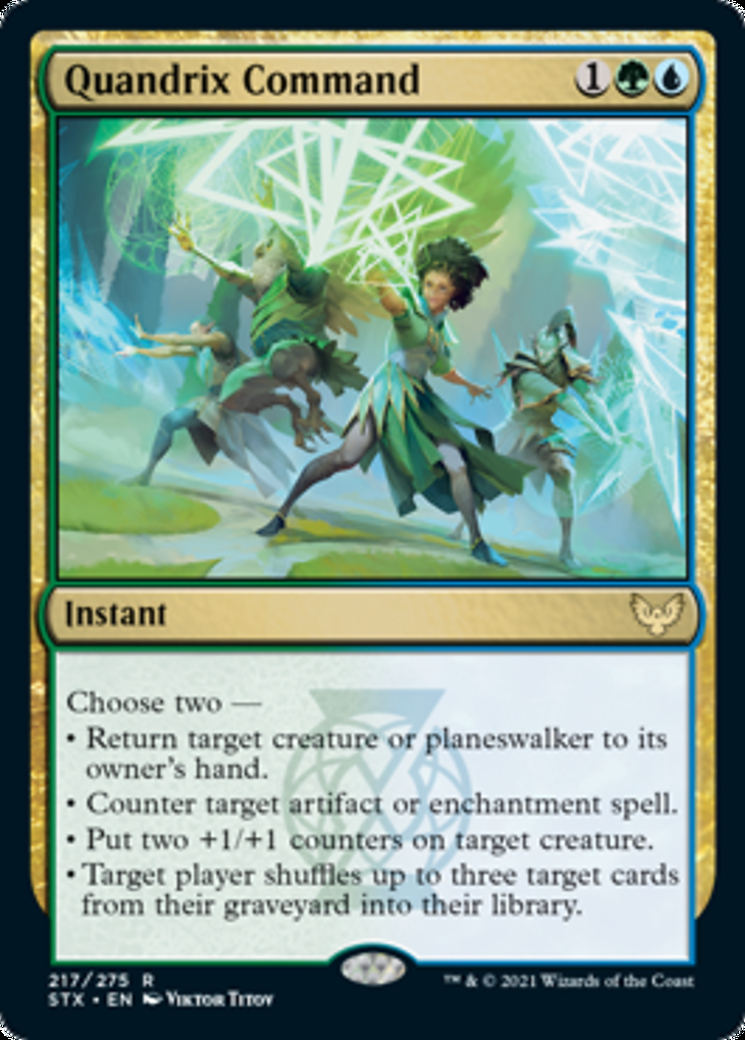 Not quite the power level that Blue/Green cards are so used to in this format but a welcome addition nonetheless. Two traditionally blue effects with a bounce effect and a counterspell that keep the power level higher on this card, and two less impressive green effects that might offer some payoff in less common scenarios. The least powerful option here is the unfortunate final line of shuffling three cards from a graveyard into a library which can be a cute effect to remove reanimation targets from your opponents but these types of effects are unfortunately always at such a high cost for little to no payoff.

Now the other three options are where this card holds power. Putting two +1/+1 counters on a creature isn’t amazing but it offers options in decks that revolve around such a mechanic (Atraxa, Praetors’ Voice and Reyhan, Last of the Abzan decks). The tempo offered by the first two lines is where this card shines. Countering an artifact or enchantment while Unsummoning a creature or Planeswalker is a stellar combination that should set your opponent back a card and likely a fair amount of mana or tempo. Used at the right time this can make your opponent’s turn useless. Being able to even use one of these while pumping a Commander is also a viable play that should frequently be worth it.

Expect this to be played more heavily in tempo-based Blue/Green/X decks such as Edric, Spymaster of Trest as well as in various Commanders that want the +1/+1 counters such as Roalesk, Apex Hybrid. 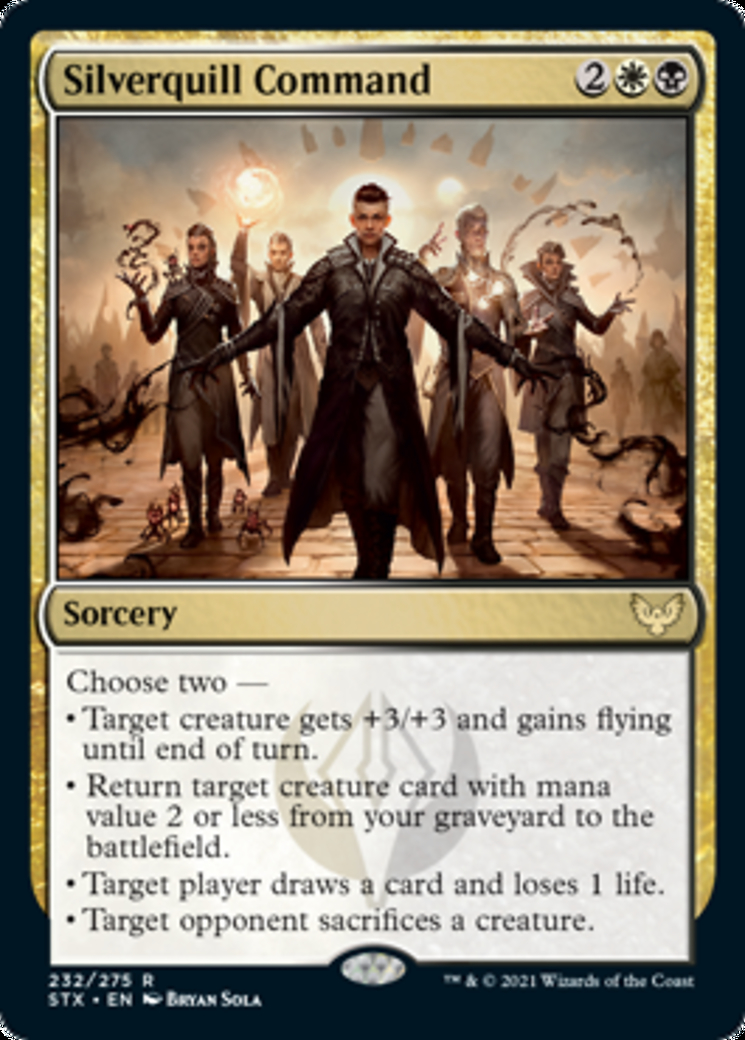 For starters, it’s a shame that this spell is Sorcery speed. It runs a similar gambit to Kaya’s Guile but without the Entwine cost. While this is likely due to its place in Standard, it really kills the playability of this card. Four mana to force an opponent to sacrifice a creature and maybe return a two mana value spell to your battlefield seems extremely rough. Even giving a creature +3/+3 and flying seems just so inefficient in comparison to the other commands on display here. This could potentially see play in a Lurrus of the Dream-Den deck but it’s just such a narrow card for something that should have powerful options or at the very least efficiency. The only real upside of this card is that it can easily replace itself but this mode should have likely read something closer to Sign in Blood given how poor the other options are.

An unfortunate miss in this cycle that feels like a lesser Ojutai’s Command. Don’t expect to see this played outside of decks that have Lurrus as a Companion. 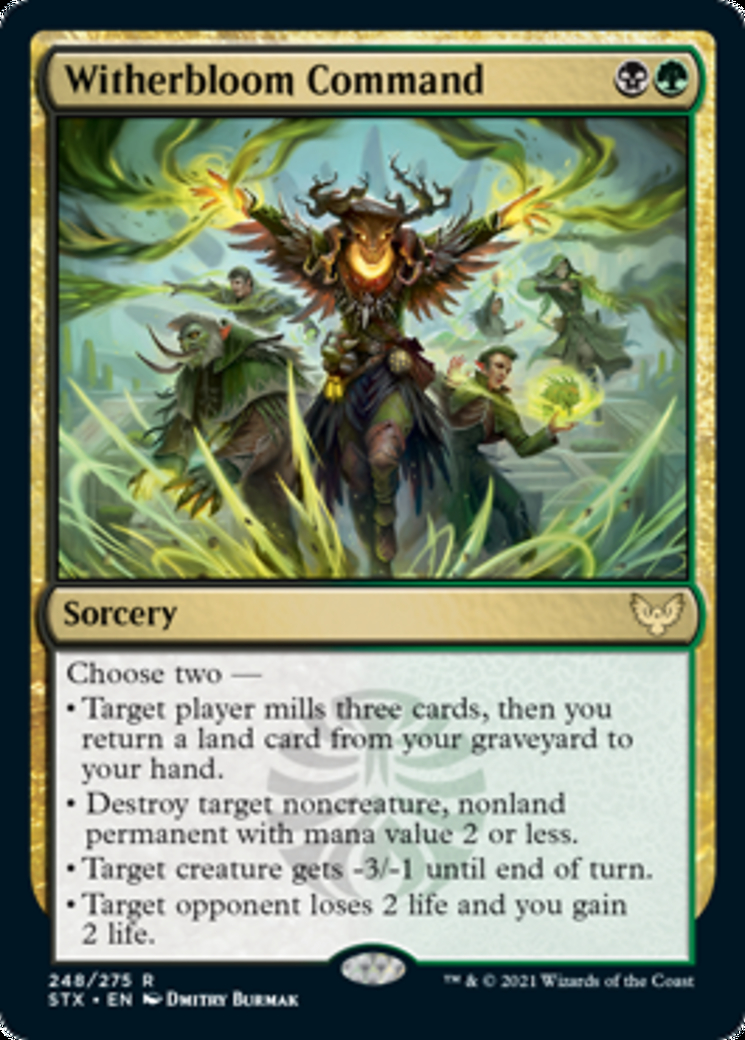 Sorcery speed doesn’t kill this card the same way it does Silverquill Command. Likely the most powerful of the cycle in this set with a mana value of only two, this card digs for lands, destroys low mana value enchantments/artifacts as well as removal. This card offers three great and efficient lines with only one miss of player-based Sorin’s Thirst. Green/Black decks are renowned for their interaction with the graveyard so the first line nearly reads as a draw three with two options for removal after that. There’s little more to say about this card other than it looks to be a phenomenal addition to Green/Black/X decks going forward and I would expect this to be a staple at the very least for more heavily graveyard-based decks in those colours.

And that’s it for the cycle of Strixhaven Commands! Going forward, you should consider running more modular spells in your decks as they will reduce the number of dead draws that more narrow cards will become as the game carries on and almost all of these are great additions. Expect Witherbloom Command to be one of the more in-demand cards as it will likely see copious play in other formats as well.

That’s it for the Strixhaven Commands today! What do you think? Do you already have slots in mind for the new Strixhaven ommands? Disagree with my evaluation of Silverquill Command? Let me know in the comments!