Oftentimes when building Commander decks, players don’t include any elements to interact with their graveyard. This can be for a number of reasons, but more often than not it’s just that the player would rather not have to use up the slots. Today, let’s go over some excellent spells to help your decks flourish and keep casting its best spells instead of jamming in a few more just okay cards. 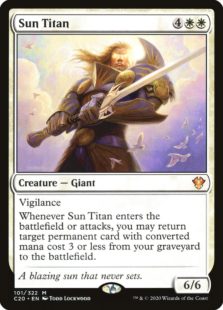 An all-star for decks running white everywhere due to the fact it’ll be rare for a player to play a six drop without having a card to bring back from the graveyard with Sun Titan. The worst-case scenario, you’ll be getting back lands that were destroyed or sacrificed. The best-case scenario, you get back the value creatures that will help you going into the mid to late game. Rarely will this card do nothing to your board state and it should be considered an automatic inclusion in nearly all white decks.

A reanimation spell in white is rare, and for it to be good is even rarer. Despite coming in at five mana, this card reanimates any creature in your graveyard without the loss of life or being a mediocre creature (see Phyrexian Delver). Protection from black on a 2/2 flying creature while isn’t impressive, it certainly has its uses blanking attacks from large black creatures in the format (defargle the Yargle for we do not bargle in jargle). Dismissed for the echo cost, this ability will often help in decks splashing white. For Karador decks, this cost means the creature will sacrifice itself so that you can recast it from your graveyard instead of paying eight mana for your Vorinclex, Voice of Hunger. This card helps fuel-efficient play patterns in a colour that doesn’t normally have access to this style of play. 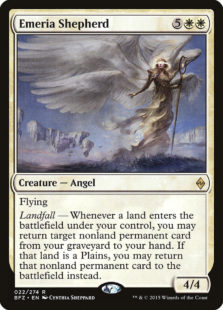 While not as powerful as the aforementioned options in white, this is certainly a wildly overlooked card. Returning nonland permanents either to your hand or to the battlefield is absurdly powerful in a format where cards and effects such as Crucible of Worlds are frequent fliers as well as Azusa, Lost but Seeking with various fetchlands. The power level of this card is underappreciated due to the mana cost of seven and the medium body. However, the Landfall ability is certainly one of the more powerful ones of recent years. If your deck can consistently enable it, then this is one of the more powerful recursion engines available in the format. 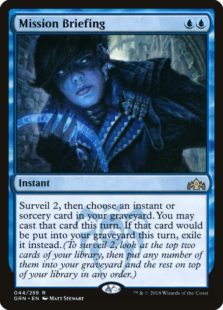 Generally used only in decks focused on Surveil, this card manages to be an incredibly low budget Snapcaster Mage without the creature attached to it. Certainly not as high power level, but a solid inclusion for blue decks that want to cast their spells more than once as well as offering your deck a pseudo-second copy of Snapcaster Mage that doesn’t cost six mana (we’re looking at you Torrential Gearhulk). An underappreciated card that gets even better when you have Commanders like Tasigur, the Golden Fang at the helm. 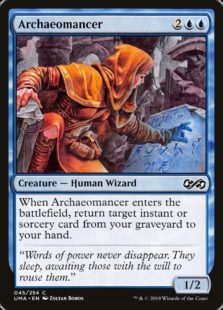 A staple in decks centered around flickering creatures for value, Archaeomancer is just a card that should see more play in blue decks in general. Bouncing this back to your hand with Cryptic Commander and countering a spell just to play out Archaeomancer and return Cryptic Command[c] to your hand is some excellent value but the creature as is still buys any spell you’ve cast or had discarded this game and this can sometimes mean the difference between winning and losing a game of Commander. Sometimes you just really need to cast your [c]Cyclonic Rift a second time to close out the game. 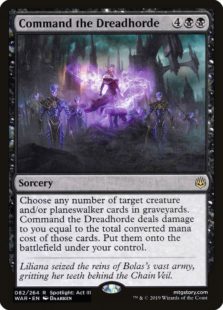 A very recent addition to the format but a very welcome one. Less powerful than Rise of the Dark Realms but also a mere fraction of the price and coming in at only six mana as opposed to nine, Command the Dreadhorde is an immensely powerful card that should be considered for nearly every deck playing black going forward. Returning not only your own creatures to the battlefield but also your planeswalkers and your opponent’s best of both. Keep a healthy eye on your life total before and after casting the card. The board state it creates should often be game-winning enough to not worry about it too much. 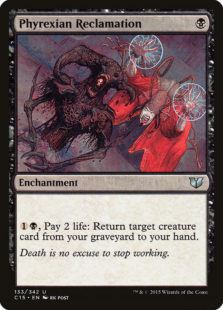 An extremely efficient way to keep your creatures in hand instead of on your battlefield. Often one of the best plays on turn one, and a great use for your mana in the later game. This will pretty much always draw an eye from your opponents as to which permanent they need to deal with next. It will keep creature removal down against you for as long as it stays on the battlefield. With such an efficient cost, there’s little reason not to be playing this card. 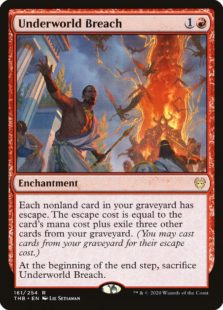 Not the best card on the list for recursion as you’ll feel pressured into performing some sort of combo after casting this card, but rest assured a value Underworld Breach is certainly worth considering in your decks. Underworld Breach is definitely not a card you’ll be casting in the early game. However, having access to any and every spell in your graveyard even for just a turn will help turn a game around. Every threat your opponents spent so many resources removing is now back with minimal cost to you. Not a card you’ll want to see in your opening hand, but if you draw it in the late game or tutor for it, you’ll be laughing at your opponent's misfortune. 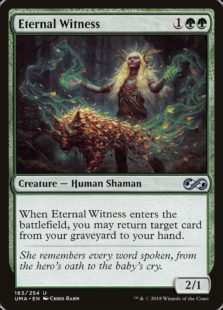 While you may be wondering why this card is on the list, opinions on this card seem to be wavering a fair amount. Let’s just explain why this card is likely going to be better than Regrowth in most decks. The 2/1 body is relevant, creatures are often easier to get additional value out of as opposed to instants/sorceries. If you’re really debating between the two, you should probably just be running both. 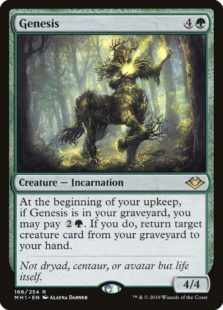 This is the kind of card that makes Eternal Witness, Buried Alive and Karmic Guide incredible engines. Paying three mana on your upkeep to bring back your best creature makes this card a harder to disrupt engine than most players give it credit for. An untimely Bojuka Bog will certainly make you sad but this card will often have gotten more value than you’d expect before that happens. 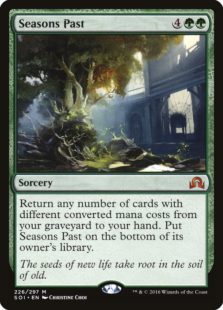 While this card seems unexciting for many, consider the fact that you can include a tutor as one of the cards that you return to your hand while Seasons Past goes back on the bottom of your library. Cast a Demonic Tutor afterward to bring it back to your hand and you have a recurring engine similar to the Green Black Seasons Past deck we saw in standard a while back. Cards like this enable Green Black midrange strategies efficiently and make it hard for any player to out grind you in the late game.

That’s it for today! Next time let’s talk about multicoloured options as well as the artifacts and lands that you can use to keep your graveyard a part of the game!