Welcome all to the Daily Dose of Ixalan, where today I’ll be finalizing my talk on the four major creature types of Ixalan by talking about Pirates! Last week I delved into Vampires, Merfolk, and Dinosaurs from Ixalan. Seriously though folks, Pirates are here, and there are plenty of them to go around. It’s great that Ixalan has been able to focus primarily on these four creature types and been able to build their design and story around them. It gives the set a focus, and players a direction when building Limited decks that could have potential synergy within them. Let’s now have a look to see how Pirates fit within the color pie of Ixalan.

Over the history of Magic, there have been 20 Pirates printed with 17 of them being mono-Blue Pirates and 18 of them being printed in Legacy only sets. The only black Pirate ever printed was Smuggler Captain from Conspiracy: Take the Crown and Ramirez DePietro, a multicolor card from Legends. They did manage to sneak in 2 Pirate cards that will be remaining in Standard after rotation. Playing Skyship Plunderer on turn two followed by Jace, Cunning Castaway on turn three means you can get in for two damage, draw a card, discard a card, and move Jace, Cunning Castaway up to 5 loyalty counters on the first turn it comes onto the battlefield. The other Pirate staying in Standard was, until Ixalan, the only mono-Red Pirate every made, Kari Zev, Skyship Raider. This is another Pirate that works well with Jace, Cunning Castaway. Let’s have a look at some of the new Pirates from Ixalan, and see some cards you will be hoping to get when you open your Ixalan packs later this month.

One of the themes about most of the Pirate cards from Ixalan that you will see, is that you need lots of Pirates to get the most value out of them. Fathom Fleet Captain is one of those cards that will help you achieve that. 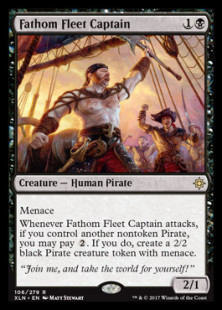 When playing a Pirates deck, you want to have plenty of Pirates on the battlefield. Fathom Fleet Captain allows you to do that by creating 2/2 Pirates with menace whenever it attacks. Its ability costs two mana to activate, which could lead to some issues where you are unable to both create a Pirate and cast a spell in the same turn. The later in the game though, the better chance you will have to use that mana to create the 2/2 Pirate. Like Kari Zev, Skyship Raider, it has menace, making it harder to block and ensuring that you will be able to activate its ability to make more Pirates more often.

The next card I’m going to be talking about today is a multicolor Pirate that reminds me of a combination of cards from previous sets. Here is Hostage Taker.

This card reminds me of a combination of cards that they’ve printed in the past. It has a little bit of Thopter Arrest mixed with a touch of Gonti, Lord of Luxury. Being able to remove an artifact or creature from the battlefield as an ability for af our mana creature is powerful. If you can cast the spell you exile before they remove Hostage Taker from the battlefield, then there is no drawback to the card. There is a possibility of currently going infinite if you choose to exile itself as the artifact or creature, but there currently is no other card in Standard that this could be used with for an infinite combo. In the past couple of years, cards with similar abilities have used the keywords “another” or “opponent” to fix this possibility. I’m not sure if this was on purpose or a mistake, but we’ll have to see if another infinite combo appears in Standard soon.

Finally, I have a Pirate that is at the highest level of all the Pirates. Here is Admiral Beckett Brass. 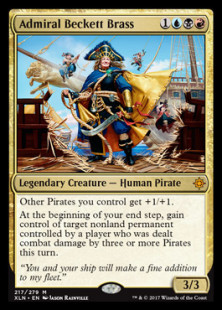 The Pirate lord has arrived! I believe that the first line of text of giving all other Pirates +1/+1 will be the most important line when it comes to this card. Being able to pump up all your Pirates, even by +1/+1 will be huge as most them have evasion abilities like flying and menace already. You can always hope of living the dream of playing Pirates on turn one, two and three, and dealing combat damage to a player on turn four is unlikely. I compare the ability of taking control of a nonland permanent to an ultimate ability of a Planeswalker. It is unlikely that you are going to achieve it, but if you do it, you are most likely winning the game because of it.

So, there you have it folks, Pirates have come to take over Ixalan. They have made a push to have more Pirate creatures than any of the other three major creature types, which could mean they probably have a good chance of there being a Pirate deck showing up in Standard. Thank you for joining me over these past four articles as I talked about the separation of the color pie and how the four major creature fit into Ixalan. Join me tomorrow as the Daily Dose of Ixalan continues as I look into one of the new mechanics from the set.