Welcome all to the Daily Dose of AFR. Today I’m going to be talking about the crossover between Magic and Dungeons & Dragons and some of the characters we'll be seeing in the Magic universe. The advantage of bringing in such a vast universe and stories from D&D is that you have plenty of characters that translate well over to the game of Magic. There is so much story behind them, that it might be tough to fit their story into one card. AFR tries its best to take the best parts of each character and showcase them in a stunning Legendary creature. Today I’ll be talking about three such Legendary characters and what their impact on the Magic scene will be.

First off is an Elf Ranger that likes to bring along their companion to the fight. Here's Drizzt Do’Urden. 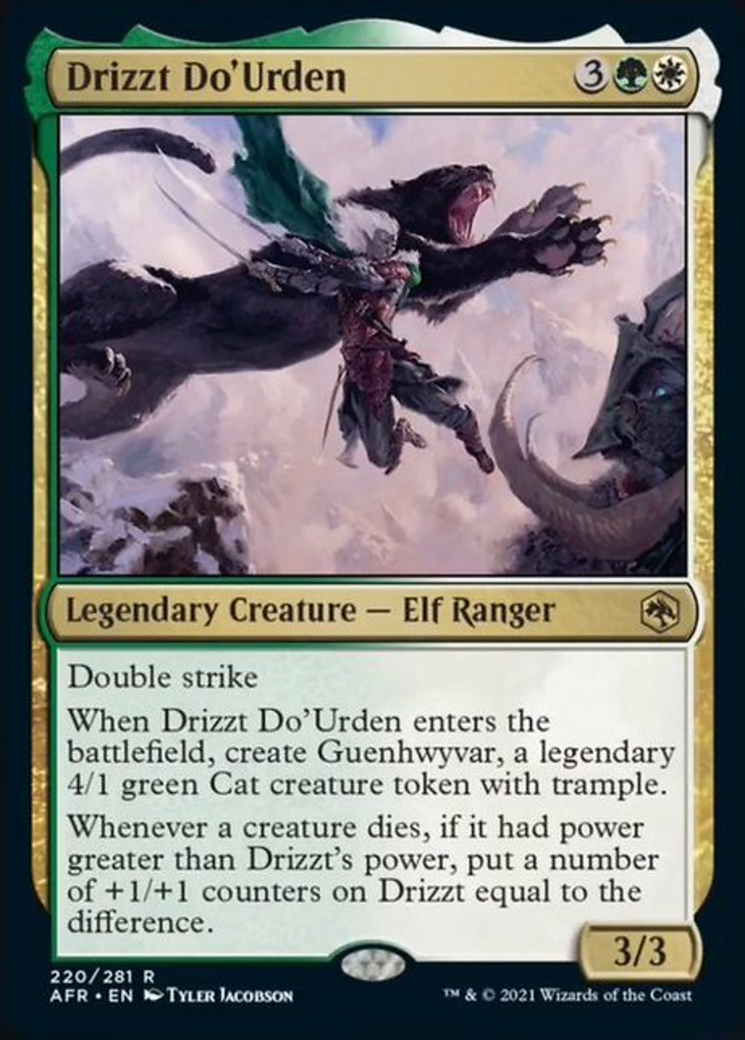 This Legendary creature packs a punch. Double strike is an underrated keyword and with relatively high power on this creature. The 4/1 token with trample is a threat on its own and if it dies will add a +1/+1 counter to Drizzt Do’Urden. There are other creatures that can help boost Drizzt Do’Urden’s power as well but to a higher degree. Deamogoth Titan can sacrifice itself to make Drizzt Do’Urden an eleven power creature. Casting Kroxa, Titan of Death’s Hunger will cause it to sacrifice itself and immediately add three +1/+1 counters to Drizzt Do’Urden. You could also add more counters by using pump spells on creatures that are dying, but this super Pelt Collector is sure to make a presence in Standard.

It wouldn’t be a crossover with Dungeons & Dragons without a powerful Dragon. Here's Tiamat. 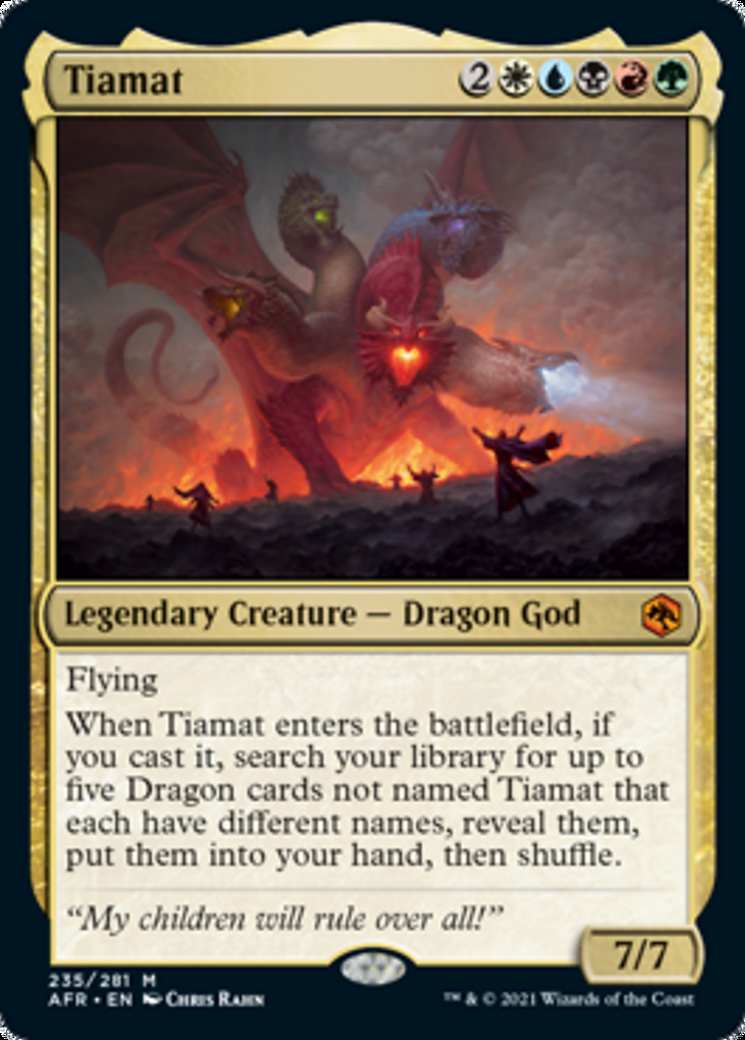 This Dragon God starts off as a 7/7 Flying creature for seven mana. Its casting cost is quite the deterrent for Standard, save for using The World Tree. Could there possibly be a land that taps for any colour of mana for Dragons in this set? It could go a long way to making a 5-colour Dragon deck possible.

Now onto Tiamat’s ability. If you can cast it, you get to search your library for five Dragons with different names and put them in your hand. Drawing any five cards is amazing, but getting your five best Dragons from your deck can put you ahead. It'll be interesting to see what the mana value range for Dragons will be in this set. We have seen seven-mana spells being cast in Standard for the past couple of months, but those have been one to three colours and not a 5-colour one like this. Time will tell if it'll see play.

Finally, there is a new planeswalker coming to Magic in the form of a Spider Queen. Here's Lolth, Spider Queen. 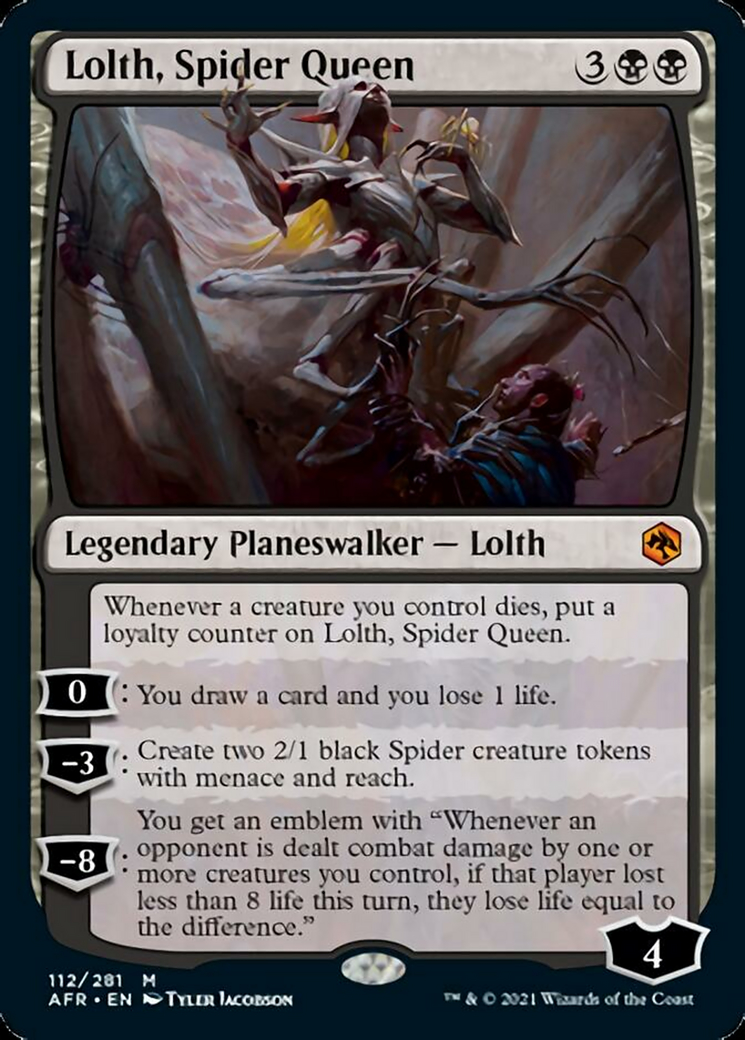 Let’s break down the abilities for this Planeswalker.

Whenever a creature you control you control dies, put a loyalty counter on Lolth, Spider Queen. – With zero plus loyalty abilities, having this static ability allows it to gain loyalty and protect itself. You can use your creatures as shields to help you build her loyalty.

[0]: You draw a card and you lose 1 life. – Having a draw ability that doesn’t cost you any loyalty means that if your opponent isn’t able to attack into or destroy Lolth, Spider Queen, you'll be gaining some major card advantage while it's on the battlefield. The life loss is a small price to pay for drawing an extra card each turn.

[-3]: Create two 2/1 black Spider creature tokens with menace and reach. – These creatures work on both an offensive and defensive level. On the attack, they have evasion in the form of menace. Without any other creatures dying though, you'll only be able to use this ability once. If you use them to block, that'll add two loyalty counters onto Lolth, Spider Queen, allowing you to use this ability a second time if needed.

[-8]: You get an emblem with "Whenever an opponent is dealt combat damage by one or more creatures you control, if that player lost less than 8 life this turn, they lose life equal to the difference." – It'll be hard to get this ultimate ability to fire as you'd need four creatures, other than those created by Lolth, Spider Queen, to get enough loyalty. If you can get to the ultimate, you'll be guaranteed to have your opponent lose a minimum of eight life every time you damage them with a creature.

As you can see, Adventures in the Forgotten Realms is loaded with amazing Legendary cards that are going to have an impact on the game for months to come. Thanks again for reading the Daily Dose and join me again tomorrow as I continue to look at the connection between the two worlds for this amazing new set.