Welcome all to the Daily Dose of Adventures in the Forgotten Realms. Today I’ll be celebrating the new set by talking about a bunch of Red cards from it. In Standard, there has always been a Mono-Red deck of some kind in existence, and we’ve seen it in the past couple of years thanks to cards like Robber of the Rich, Embercleave, and Torbran, Thrane of Red Fell. Although these cards can be still played for the next couple of months, they'll be gone with Standard rotation. Today I’ll be talking about a nice removal spell, a recurring creature, and a new planeswalker.

To start off, is a nice removal spell with a Fireball type effect. Here's Meteor Swarm. 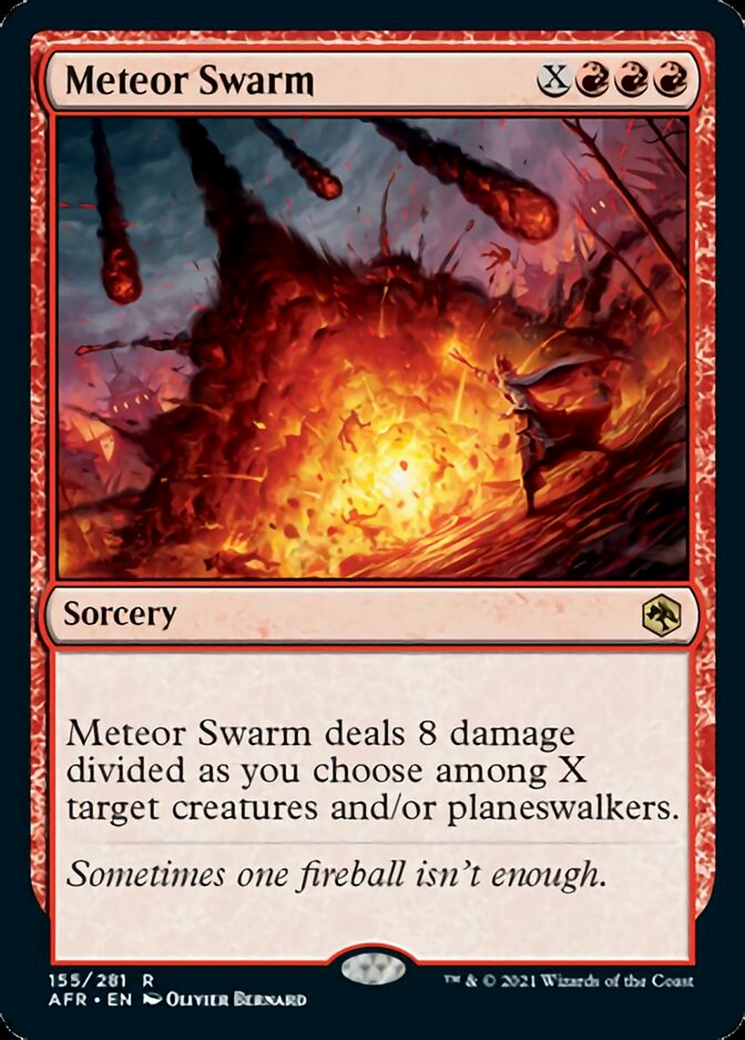 Meteor Swarm is a variable removal spell, able to divide eight damage across X creatures and planeswalkers. You'll need to spend a minimum of four mana when you cast this spell, as leaving X at zero means that you're dealing eight damage to zero targets. For four mana you can use it as a one-for-one removal if there is one large creature you need to take care of or a planeswalker with a high amount of loyalty. Once you can cast it for five or six mana you start to get greater value out of the card. Meteor Swarm is a great late-game way to get yourself back in the game by removing multiple threats or clearing the way for an attack of your own. With enough mana, it acts like a one-sided wrath for your opponents’ go-wide strategy.

Now that we’ve removed some creatures off the battlefield, it’s time to attack through the air with Flameskull. 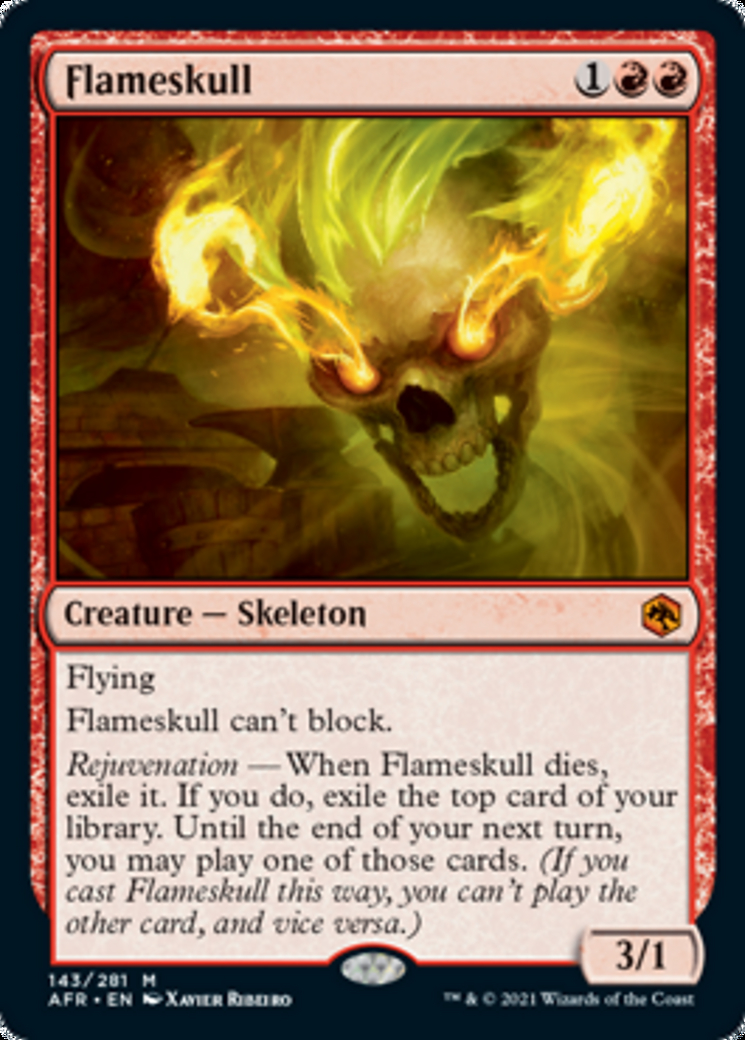 This is one of those cards where you must read the ability a couple of times to make sure you understand what it does. Once you do, you realize the power of the card. Flameskull is meant as an aggressive card to pressure your opponent in the air with evasion in the form of Flying. This is emphasized by the fact that it can’t block, meaning you're only going to get value out of this card from either attacking or sacrificing it. Now onto its Rejuvenation ability. This ability allows you to either:

All the options listed above are strong and each provides their own value. From a card advantage sense it’s better to either replay Flameskull or play your other exiled card, otherwise you aren’t gaining an extra card to play from the Rejuvenation ability. You often won’t know when Flameskull will die if your opponent uses removal, so it’s hard to gauge when this scenario might come up. I think overall though, you'll gain repeated value with this card, and it will be hard for your opponent to remove from the battlefield.

This isn’t the only recurring threat from AFR that you can put on the battlefield. Check out the new planeswalker Zariel, Archduke of Avernus. 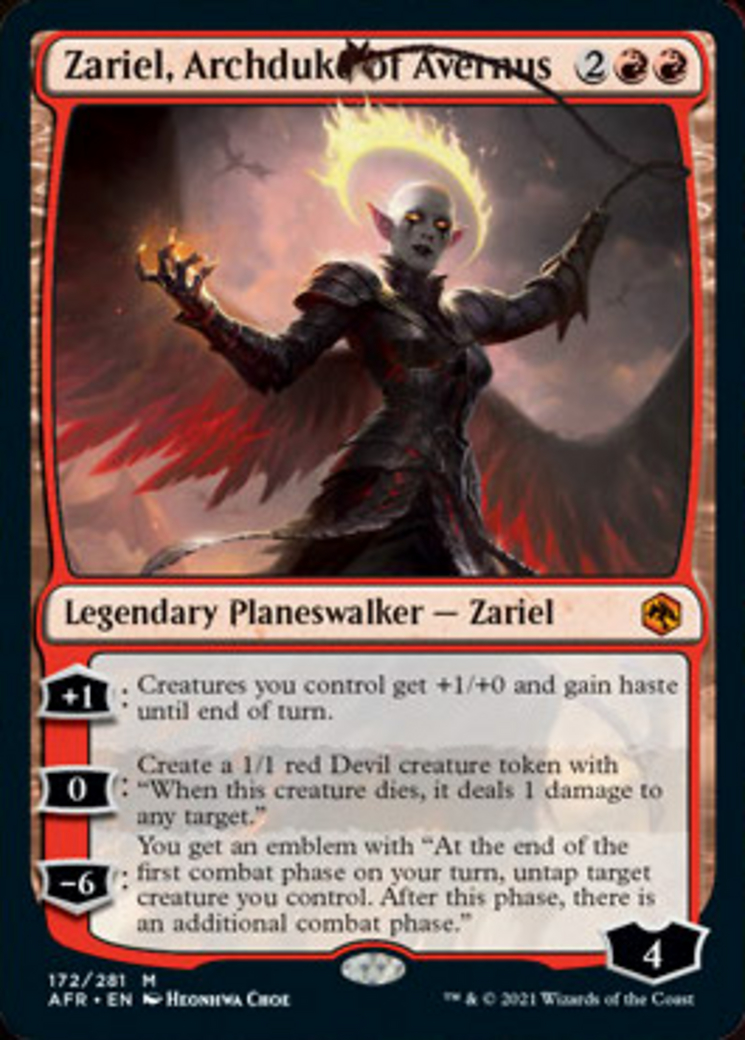 This four-mana planeswalker starts off with four loyalty and has three strong abilities. Let’s break down the abilities for this planeswalker.

[+1]: Creatures you control get +1/+0 and gain haste until end of turn. – This ability can be used to turn new creatures into an immediate threat while giving them a small power boost. It can also be used to take your existing creature army and give them a power boost, including all the Devil tokens you’ve created throughout the game with Zariel, Archduke of Avernus’s second ability.

[0]: Create a 1/1 red Devil creature token with "When this creature dies, it deals 1 damage to any target." – We have seen this ability before with Tibalt, Rakish Instigator, but this time around it doesn’t cost any loyalty. This allows it to protect itself on the ground each turn while using your blocker to deal one damage to your opponent. This is a great way to help finish off your opponent for Red decks.

[-6]: You get an emblem with "At the end of the first combat phase on your turn, untap target creature you control. After this phase, there is an additional combat phase." – This is a nice ultimate ability to allow you to attack with one creature twice in a turn. Having a Seize the Day every turn is pretty powerful with the right creature.

Everything is coming up Red, and the future of Mono-Red decks is looking strong thanks to these new additions. Thanks again for reading the Daily Dose of AFR and join me again tomorrow as I finish off the week talking about some more Dungeons & Dragons-inspired cards.