Welcome all to the Daily Dose of Adventures in the Forgotten Realms. Today I’ll be talking about a new Enchantment subtype card called Classes. Dungeons & Dragons characters each have a Class and that helps determine what they can do and what abilities they have. This has been translated into cards that look like a combination of Sagas and Level Up Cards. Class is a new Enchantment subtype in which when you play the Class, it starts with a static ability. As a sorcery, you can spend the mana to level up the class to a higher level, adding new abilities to the Enchantment. This means that the Class Enchantment gets better the more you level it up.

For each Class, I’ll talk about its base ability, Level 2 ability, Level 3 ability, and how beneficial it would be to have multiple copies of the Class in your deck. 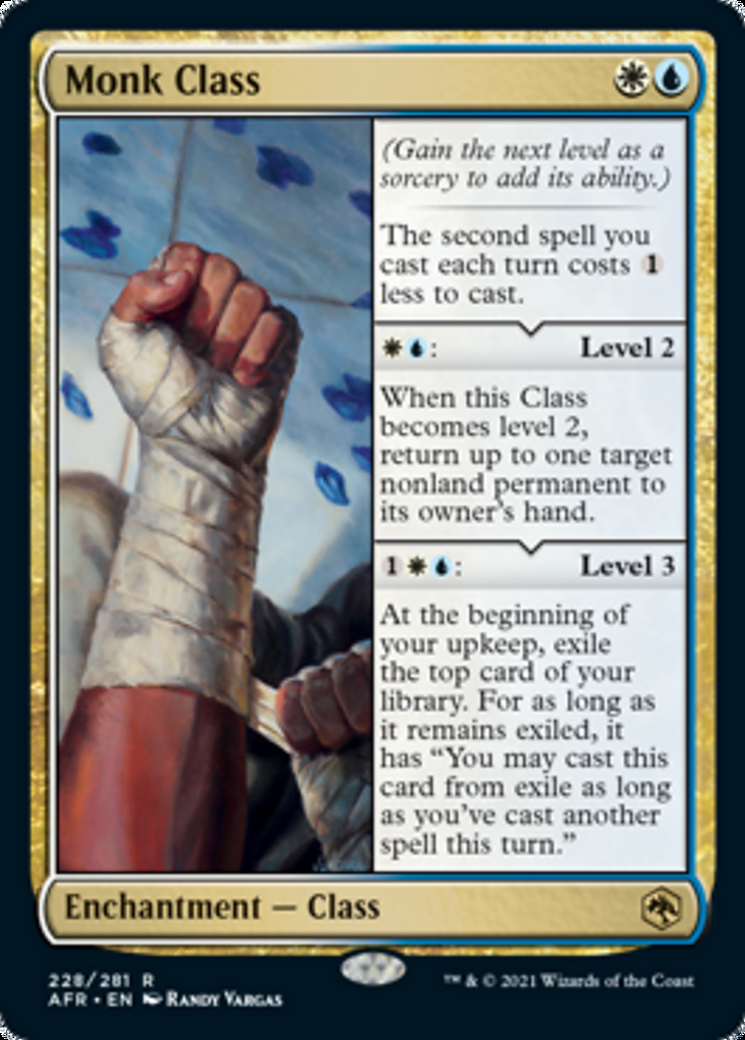 Base Ability – This can have an immediate impact if you are playing this after turn two and can cast something the same turn you cast Monk Class. Having a deck full of cheap card draw and cards like Clarion Spirit will help.

Level 2 Ability – This allows you to have a two mana bounce at Sorcery speed. If needed it can be used to bounce something immediately for four mana if used in the same turn as casting it.

Level 3 Ability – This is a great Level 3 ability for card advantage, providing you with a second spell to cast each turn on top of what you draw. This will increase the chance you can cast a second spell in a turn.

How good is having multiple copies of this Class? – This card works for every Level when it comes to having multiple on the battlefield. Another Level 1 will make it even cheaper to cast your second spell each turn. Being able to bounce an additional threat during Level 2 will be good. Once you get multiple Level 3 abilities your chance of casting multiple spells in a turn increases greatly. 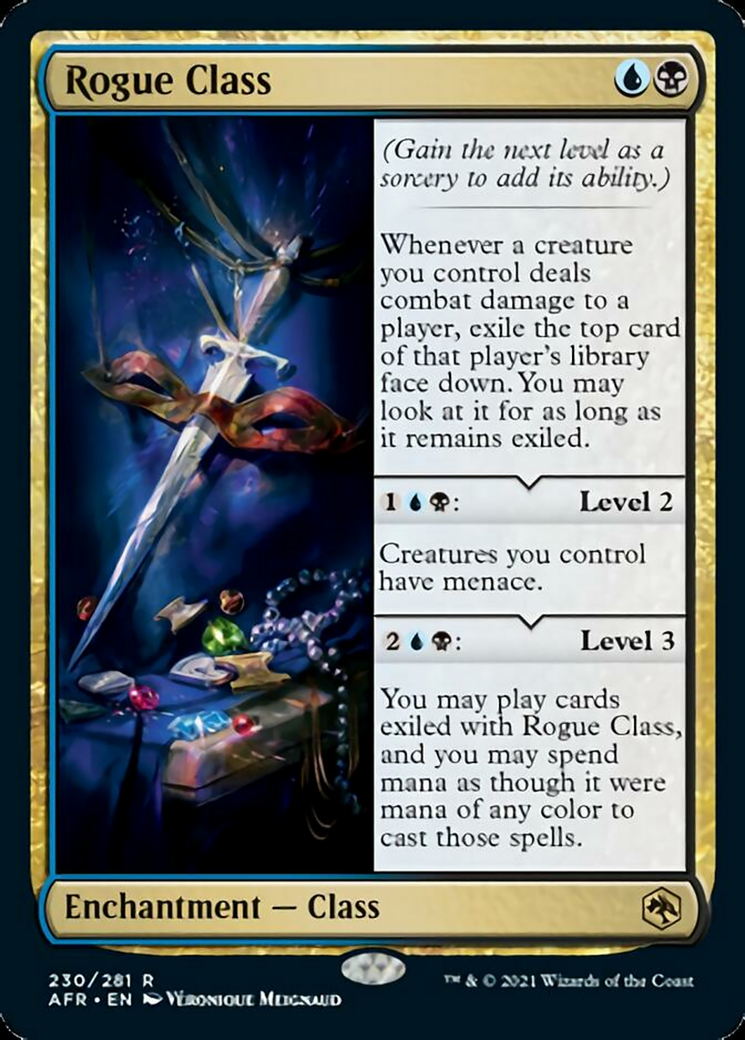 Base Ability – Another strong Dimir card for Rogue decks to work well and help in their mill strategy, but with the bonus of something a little better possible in Level 3 of this class.

Level 2 Ability – This evasion will help with the first Level of this Class. Combine this with a lot of Rogues having Flying and it will be tough for your opponent to block any of your creatures.

Level 3 Ability – The value of this ability will come with how many cards you are able to exile with its Level 1 ability. It helps that you can also play lands that are exiled as well as cast spells.

How good is having multiple copies of this Class? – This is probably the worst Class when it comes to getting value out of multiple copies. While Level 1 will exile an additional card for each copy, there is no value in having multiples for Level 2 or 3 of Rogue Class. This means you won’t have to Level any additional copies past its base ability. 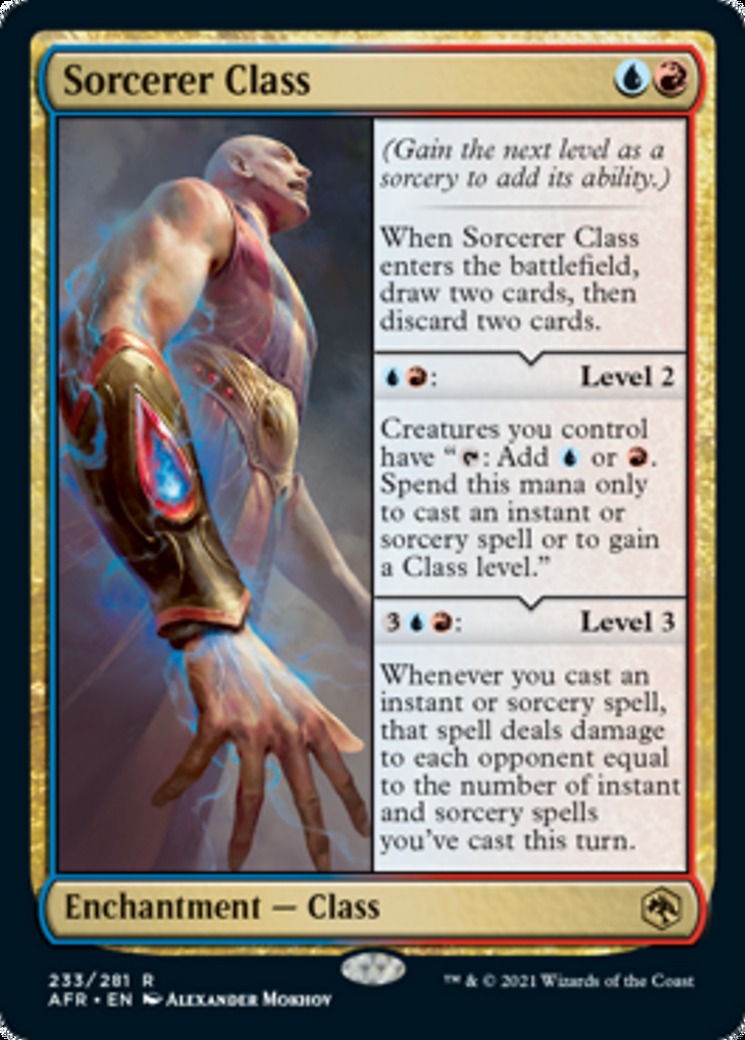 Base Ability – This is a great base ability that helps you with card selection and helps even more if you can use your graveyard as a resource as well. It’s good that you get to draw first before discarding.

Level 2 Ability – This ability can help you ramp into high mana value Instant or Sorceries or Level up existing Classes that you have. It can be a dead ability if you have no creatures on the battlefield.

Level 3 Ability – This is another one of those Level 3 abilities that seems like an ultimate ability of a Planeswalker. Once you have this activated, each Instant or Sorcery you cast becomes more powerful. 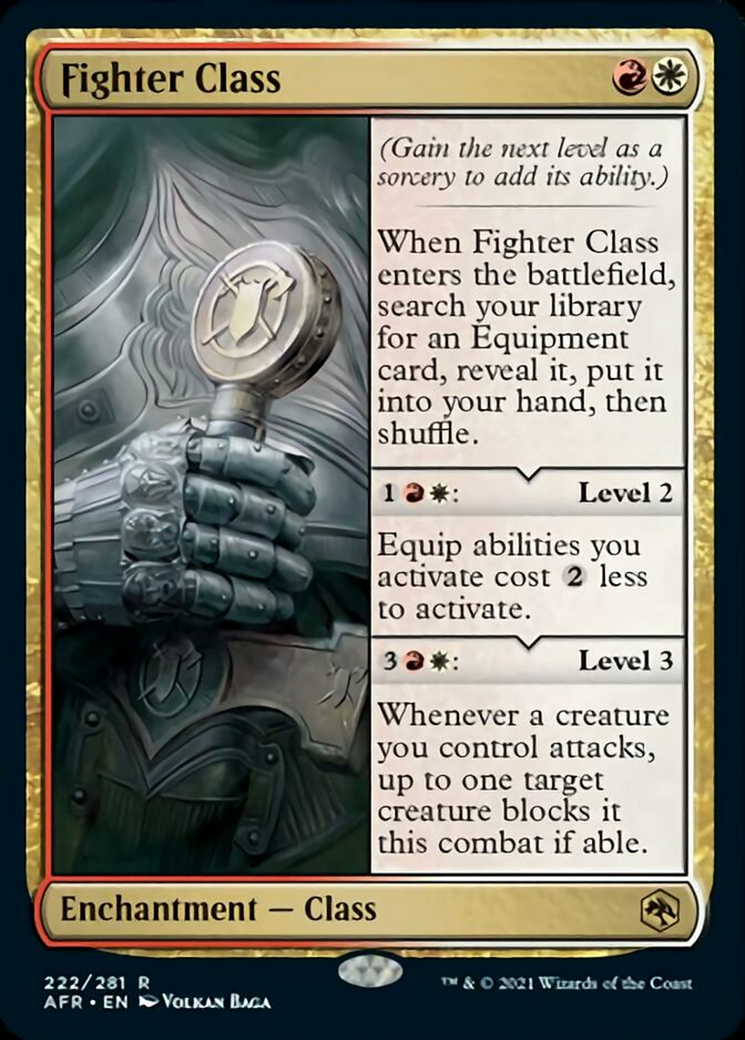 Base Ability – Going to search your library for a card is a strong ability, and if you have the right deck build, you're sure to find strong Equipment to use.

Level 2 Ability – This ability cheapens the Equip cost for the Equipment you just tutored for and future Equipment. A solid Level 2.

Level 3 Ability – This is a very situational ability and will be useful if you’re ahead on the board and can force your opponent's creatures to block the next turn in an unfavourable combat scenario.

How good is having multiple copies of this Class? – This Class has 3 Levels of abilities that work well in multiples. Each cast will help you search for another Equipment to cast. Level 2 will only work better in multiples if you have Equipment with a higher equip cost than two, which is a fair number of them. Level 3 can be good in multiples if your opponent has multiple creatures. 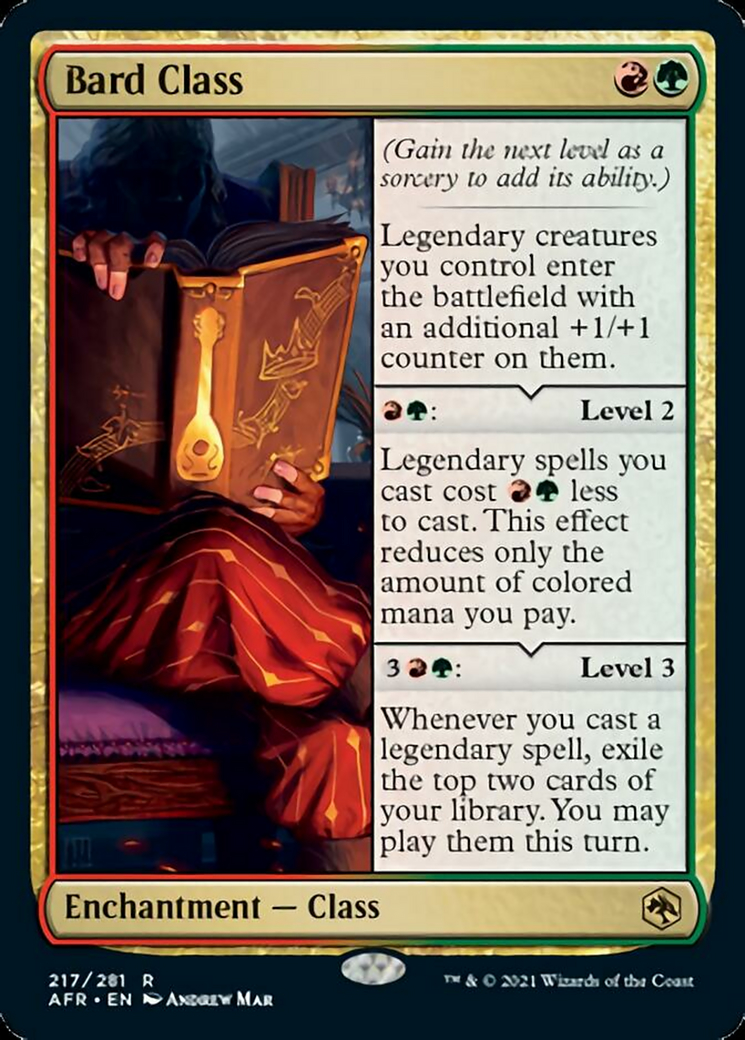 Base Ability – It wouldn’t be too hard to have a deck full of Legendary creatures that all get +1/+1 when they enter the battlefield.

Level 2 Ability – There are currently sixteen Legendary Green/Red cards that will benefit from a reduction in mana costs from this ability. That’s more than a decks worth of cards to work with in Standard alone.

Level 3 Ability – The reduction in mana for casting Legendary spells will allow you to still be able to play the two cards exiled from this ability.

Multicoloured Classes have taken the already powerful Classes and gave them a power bump. Each two-coloured Class builds on its theme through gaining Levels making them more powerful than before. Thanks again for reading the Daily Dose of AFR and join me again tomorrow as I’ll talk about more amazing cards from the new set.