Daily Dose of Amonkhet – Embalm, Back from the dead for Round 2

Welcome all to the Daily Dose of Amonkhet where today I’m going to be talking about a brand-new mechanic from Amonkhet. We've seen mechanics involving cards in the graveyard in the past, such as Flashback, Delve, and Spell Mastery. Amonkhet brings us an almost-Flashback ability for creatures called Embalm, which works as follows:

“Exile this card from your graveyard: Create a token that's a copy of it, except it's a white Zombie with no mana cost. Embalm only as a sorcery.)”

What this means is that you'll be able to play every creature with Embalm twice, giving those cards extra value. A couple things to note are that the creature must be in your graveyard to be Embalmed, and that Embalming a creature creates a token copy of the card instead of returning the card to the battlefield directly. This is important in a couple of ways. First, you can use cards that take advantage of tokens, such as Second Harvest, to create even more Zombie tokens. Secondly, if you use spells such as Vessel of Nascency and Grapple with the Past, you can make sure that your Embalm creatures go to your graveyard to provide you with extra value.

Now it’s time to have a look at some of the new creatures from Amonkhet with Embalm. The first card I want to have a look at is similar to cards we've seen before like Banisher Priest. Here is Angel of Sanctions. 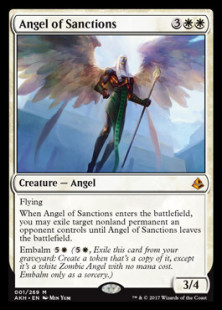 Angel of Sanctions' ability to remove a nonland permanent makes this a strong creature even without Embalm. Just being able to exile anything on the battlefield is worthy of being a card by itself, throw in the fact that you get a 3/4 Flying creature out of it and it's even better. The mechanic shines here in the fact that even if Angel of Sanctions dies, you still have it waiting in your graveyard, ready to strike again whenever you need it. The Embalm cost of six isn’t terrible as you'll be able to afford it most times the turn after you cast it from your hand.

Next is a creature with what appears to be a rare Embalm cost. Here is Honored Hydra. 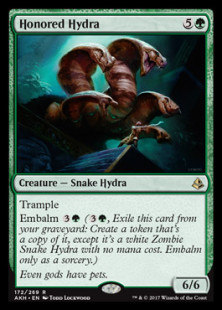 At first glance, this might be an underwhelming card, being a 6/6 trample creature for six mana. Its strength lies in the fact that if you can build a deck around putting this card into your graveyard, you'll have the opportunity to cast it for only four mana. Honored Hydra is the only creature we have seen so far with an Embalm cost less than or equal to its original casting cost. There's a reason we haven’t seen many creatures with this reduced Embalm cost, since it's very powerful and there are many easy ways to get cards into your graveyard, such as with Grim Flayer and Liliana, the Last Hope. Using your graveyard as a resource just gets better and better with Embalm creatures. One cool thing is that when you Embalm Honored Hydra it goes from a green creature into a White Zombie Snake Hydra.

Finally, I want to have a closer look at a creature that could be called the Embalm lord. Let’s have a peek at Temmet, Vizier of Naktamun. 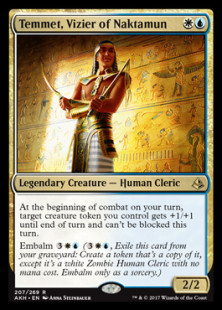 First off, it's great that there are currently so many ways to create tokens that can benefit from getting +1/+1 and becoming unblockable. To start off, there are a ton of ways to creature Servos and Thopters. You can also use Temmet's ability on a Knight Ally Token created from Gideon, Ally of Zendikar, and don’t forget about using it on itself if you’ve put it back onto the battlefield with its Embalm cost. You can use it to pump up all your other Embalm creatures in your deck as well. I see a Commander deck in the future for this Legendary creature.

I believe that Embalm can be a very powerful mechanic in Limited as it will always provide you with getting two creatures for the price of one over a couple of turns. Value like that should not be overlooked when you're playing Limited. Whether Embalm creatures will see play in Standard is up for debate though.

Which Embalm creature in Amonkhet is your favourite so far? Thanks for reading another edition of the Daily Dose of Amonkhet. Come back tomorrow as I continue digging deeper into the previews of Amonkhet.