Welcome all to Prerelease week here at the Daily Dose of Amonkhet! Yesterday I talked about 10 Commons that you want to make sure are in your deck for prerelease weekend. Today I’m shifting focus to those three cards between the Commons and the Rare, the Uncommons.

I find that the Uncommon slot of a pack really sets the tone for what kind of deck I’m going to build in a Sealed event. When it comes to the Limited format, they're often more powerful than most of your rare cards. This is where you'll find some great removal spells and powerful creatures needed to help you win your match. So here's a look at 10 Uncommons that you should slot in your deck this weekend from Amonkhet. 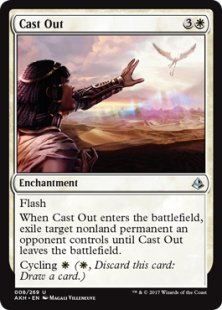 Cast Out – This is by far the best removal card in the set. Being able to target anything on the battlefield with it (there are no lands you'd want to target in this set) makes this card a threat. There are also very few ways to get rid of enchantments in Amonkhet, which means it most likely won’t be leaving the battlefield anytime soon. Having flash is huge and cycling means if you get it early and need lands you can cycle it, but most times you won’t want to cycle away this enchantment. 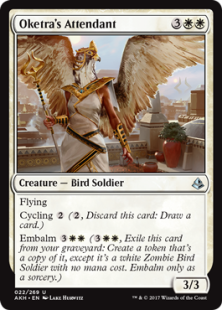 Oketra’s Attendant – Flying creatures are always strong in Limited, but this one is slightly above the curve. Five mana for a 3/3 Flying might be too weak of a card, but throw in the fact that you can Embalm it for the same cost and you have some major value. If you need a more diverse threat, you can always just cycle for two mana in the early game and cast if for five mana later from your graveyard. 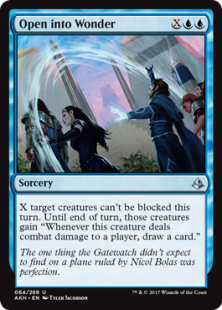 Open into Wonder – So let me get this right. You get to attack with X unblocked creatures for who knows how much damage, and then draw X cards to boot. Yes please! Games of Limited Magic often end up in a creature stalemate where no one wants to make an attack in fear of dying on the counter attack. Open into Wonder will allow you to get in for some finishing damage, or at the least draw some cards to pull you ahead in the game. 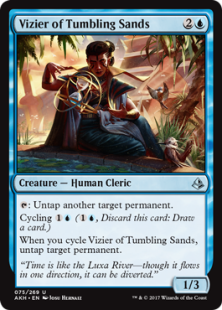 Vizier of Tumbling Sands – This 1/3 creature can be a very versatile little card. Being able to untap any permanent opens a lot of possibilities. First, you could untap a land and use it as a mana ramp. Or you could use it to untap an artifact or creature with an activated ability to get double the value. You can also untap a creature with exert so that you can keep attacking with it every turn. Don’t forget the obvious bonus of being able to cycle it if you need something better. 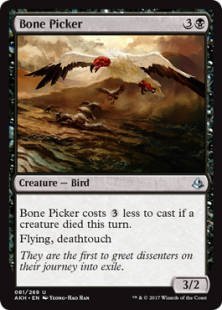 Bone Picker – Having a 3/2 Flying, deathtouch creature for four mana is not too bad by itself. Being able to possibly cast it on turn two or three if one of your creatures dies is even better. True, there is no Walking Ballista shenanigans to be able to cast it on turn one, but even casting it for one mana later in the game to allow you to cast two spells in one turn is strong. It will also trade in combat with any non-god creature you will see in Amonkhet. 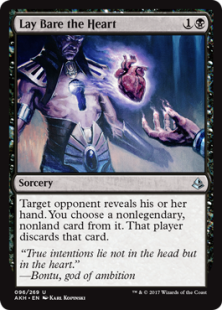 Lay Bare the Heart – Now this is a quality hand removal spell. It doesn’t care if the card is a creature or non-creature, or what the casting cost is, just that it's non-legendary. This applies to pretty much every card in Amonkhet, so chances are if you play this on turn two, you'll always get a quality spell out of their hand. Just be careful to not give them some value by putting an Embalm creature or Aftermath card into their graveyard. 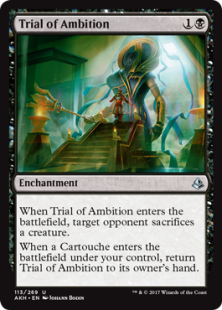 Trial of Ambition – Trials are cards that I value very highly just by themselves, as shown here by Trial of Ambition. Making your opponent sacrifice a creature for only two mana is quite strong. There are times when the battlefield will have a lot of creatures on it, making this be a little less valuable so I recommend playing it to remove early threats or using other removals to clear the way to use this effectively. There are also plenty of usable Cartouches out there in Amonkhet that can help you get extra value out of Trial of Ambition. 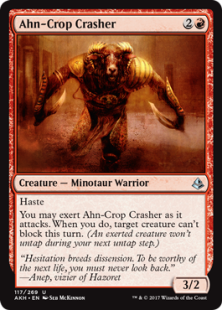 Ahn-Crop Crasher – I see a lot of value in creatures with Haste. They can really surprise your opponent who won’t see the attack coming. Ahn-Crop Crasher takes this one step further by removing a blocker from combat to allow for a stronger attack from all your creatures. Being able to make creatures not block in Limited is a very good way to break through any creature stalemates you might have. 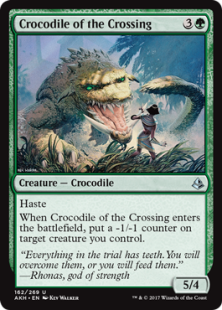 Crocodile of the Crossing – Speaking of creatures with Haste, here is another one from Amonkhet to make the list. Even if you must put the -1/-1 counter on it itself, having four Haste damage on turn four is strong. Most of the time you'll be able to put that counter on another creature, maybe even a green or black creature that takes advantage of having -1/-1 counters placed on it, like Channeler Initiate. 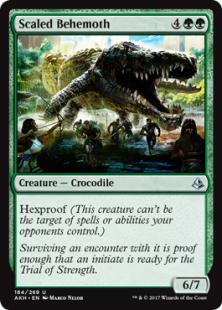 Scaled Behemoth – The scariest keyword that you can see on a creature that your opponent controls is Hexproof. In any Limited format, there are very few ways to deal with a Hexproof creature except destroying it during combat. The problem is that Scaled Behemoth is a 6/7 powerhouse making it nearly impossible to deal with.

These are some powerful Uncommons, but I know there are even more from Amonkhet that can make a difference. This should give you a start on what to look out for when going through the Uncommons slot of your Amonkhet packs at prerelease. Remember to consider all the wonderful cards in your pack when building your deck.

Thanks for reading another Daily Dose of Amonkhet. Join me tomorrow, as prerelease week continues as I talk about the different deck archetypes that you can find in Amonkhet Limited play.