Welcome all to the Daily Dose of Core 2019! Today I’ll be talking about a needed reprint and two creatures from my wife’s favourite creature type, Dragons!

There are currently plenty of powerful artifacts and enchantments running around Standard like Heart of Kiran and Seal Away. Having a card that can deal with either of those while also improving your battlefield is something I’ve wanted for a while, and Core 2019 will bring that to Standard. So without further ado, I want to look at a much-needed reprint for Core 2019, Reclamation Sage: 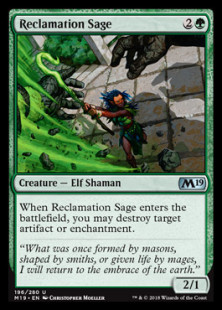 There's no shortage of great enchantments and artifacts in Standard right now. Reclamation Sage gives us a way to fight back against them in almost every top deck.

You have Bomat Courier and Scrapheap Scrounger in Mono-Red decks. You can find Walking Ballista, Heart of Kiran, and Thopter Tokens kicking around Black-Red decks. Against Blue-White Control you can target Search for Azcanta and Torrential Gearhulk. When playing against Black-White midrange you’ll have a few targets that include History of Benalia, Cast Out and Aethersphere Harvester. So, no matter what top deck you are playing, you will have targets for Reclamation Sage, making it a perfect reprint for Core 2019.

Dragons are one of the most popular creature types in Magic and even when the set isn’t named Dragons of Tarkir, you will still often see one or two Dragons in every set. Dominaria included Darigaaz Reincarnated and Verix Bladewing. Now Core 2019 is bringing Dragons back in full force with what looks like many of the scaled, winged creatures.

Which brings us to our next card, which allows you to grow your Dragon brood with every Dragon you cast. Here is Lathliss, Dragon Queen: 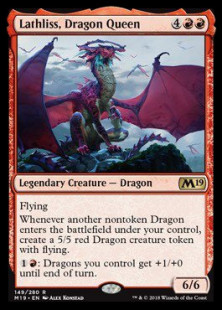 Now this is a nice Dragon. To start off you get a 6/6 Flying creature for only six mana. This is great for a mono-coloured creature. The greatest value for Lathliss, Dragon Queen comes when you untap your lands on the following turn. Now the value train can start to roll. On one side of it, every Dragon you cast now gives you a bonus 5/5 Dragon. Then, once you’ve assembled a Dragon army, you can pump them all up repeatedly with its other ability. I’m just happy playing this as a 6/6 Flying creature, anything else is just a bonus.

Do I believe that this will see Standard play? Probably not. There will be too many other more powerful multicolour Dragons out there to play with, but in Limited it is an absolute bomb card to open in any pack.

Finally, with Nicol Bolas making an appearance in Core 2019, I was not expecting any of the other original Elder Dragons from Legends to show up. But it seems like the whole cycle might make an appearance. Let's take a look at Vaevictis Asmadi, the Dire: 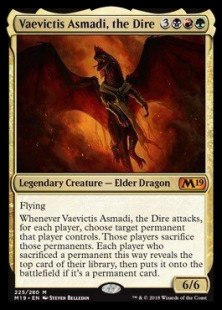 Wow, what a Dragon! We have another 6/6 Flying creature for six, but this time it's out for some destruction!

There is a lot of text on this Dragon, so let me break it down for you. Whenever it attacks, you are going to choose a permanent for both players. That’s right, including yourself. For example, you can force your opponent to sacrifice their most powerful card while you sacrifice a land, or something you don't need anymore. Using the laws of averages, the hope is that each time you do this your opponent gets a card of less value, while you gain a card of greater value.

It is randomness at its best, but you are taking out their best permanent on the battlefield every time Vaevictis Asmadi, the Dire attacks.

Core 2019 sure is bringing out some powerful cards to start the preview season off! While Core 2019 as a set could have been a letdown after Dominaria, it appears to be quite strong so far.

Thanks again for reading the Daily Dose of Core 2019. Join me again tomorrow as we see some new cards, and possibly some more sweet reprints making their way into the Daily Dose!