First off is a Zombie that reminds me of Midnight Reaper. Here is Headless Rider. 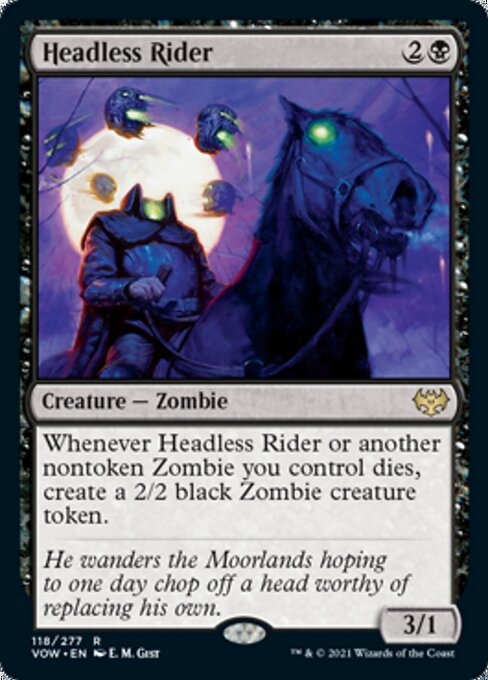 Next up is a Human looking to stitch together some Zombies. Here's Geralf, Visionary Stitcher. 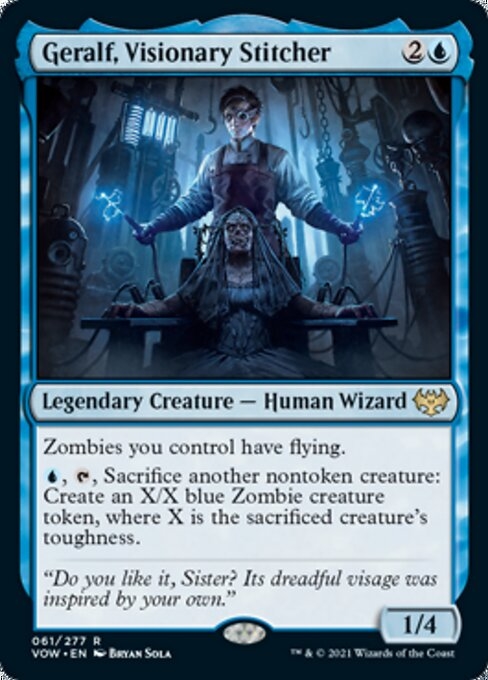 This is an interesting Mono-Blue legendary creature that isn’t a Zombie itself but acts as a pseudo-Zombie lord. One of the big issues with Zombies from Midnight Hunt is that they often couldn’t get through a littered battlefield. With Geralf, Visionary Stitcher, it gives all your Zombies evasion in the form of flying.

On top of providing evasion, it can also create some pretty big Zombies thanks to its ability. Geralf, Visionary Stitcher is looking for creatures with the largest toughness to create the biggest Zombies it can. Once I saw this ability, I immediately thought of Charix, the Raging Isle, and its seventeen toughness. Sacrificing that creature to create a flying 17/17 Zombie token will be too much for most opponents to deal with. 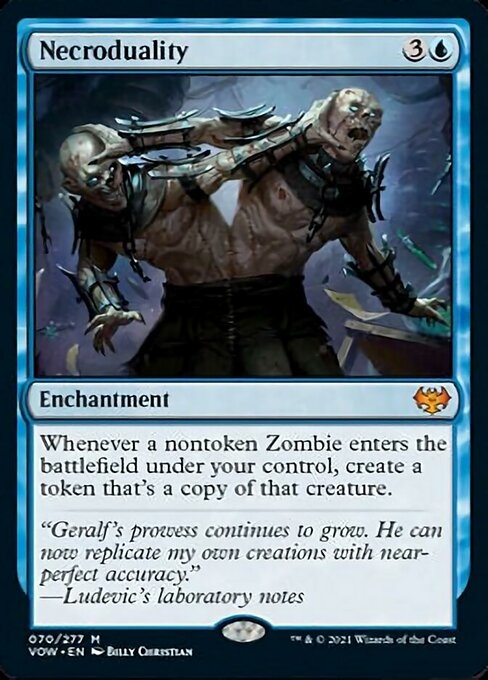 Necroduality is a nice enchantment for a Standard Zombies deck. This Zombie-Panharmonicon will allow you to double up on all your nontoken Zombies allowing you to overtake your opponent in short order. I wanted to focus on the Zombies that had some nice enter the battlefield triggers. Casting Acererak the Archlich will allow you to complete a Dungeon in half the time. If you have Champion of the Perished on the battlefield you'll get two +1/+1 counters every time you cast a nontoken Zombie. If you cast Diregraf Horde you will get a whopping six Zombies with a total of fourteen power on the battlefield. A well-played Jarl of the Forsaken would allow you to snipe down two creatures that have taken damage already that turn. Another thing to note is that multiple copies of Necroduality stack, allowing you to make multiple copies of any nontoken Zombie you cast.

It’s great to see some new cards and tools for a Standard Zombies deck. Thanks again for reading the Daily Dose of Innistrad Crimson Vow. Join us again tomorrow as I shift over to some powerful green cards from the new set.