Welcome all to the Daily Dose of Ixalan, where prerelease week continues! Yesterday I talked about some of the most powerful commons of Ixalan and how they can help you when building your deck for your local prerelease. Today I want to talk about those cards between the commons and rares, uncommons.

Three per pack, 18 total uncommons per prerelease. That's all you get when it comes to the uncommon slots from your six packs of Ixalan. Most of the time, your uncommons will include some of the most playable and powerful cards of your sealed card pool. It’s important to be able to identify those that stand out to help build your deck. That being said, let’s look at the best uncommons Ixalan has to offer. 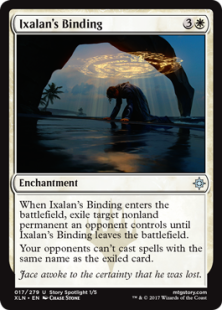 Ixalan’s Binding – This is an all-purpose removal spell that has the off-chance of getting more value if your opponent happens to have multiple copies of the same card in their deck. Blanket removal is rare in this format, so having this in your deck meana that you will be able to deal with any threat. 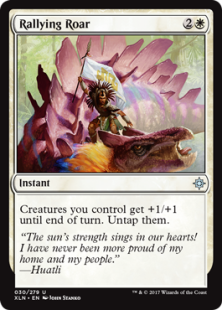 Rallying Roar – This is a great combat trick to use for attacking and blocking. If you decide to go wide and put a lot of threats on the board, you may even save a couple of them in combat with this spell. On defense, you can surprise your opponent when they try and attack by untapping your team and setting up good blocks with your now pumped up creatures. 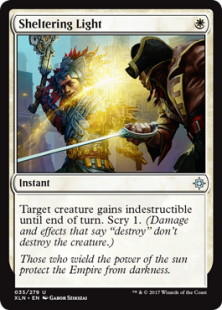 Sheltering Light – This combat trick works great to either counter your opponent’s removal spell, or to save one of your creatures from combat damage. The fact that you get to Scry 1 is just a nice bonus. 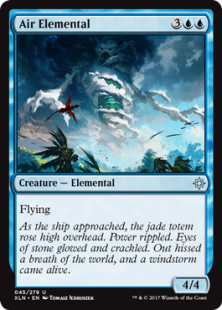 Air Elemental – There aren't many big flying creatures in Ixalan, so Air Elemental stands out. In fact, it is the largest flying creature in Ixalan period (tied with Deathless Ancient). This means that if you have it on the battlefield, your opponent can't just block with one creature. They'll either need multiple creatures, or a creature combined with a spell or ability. 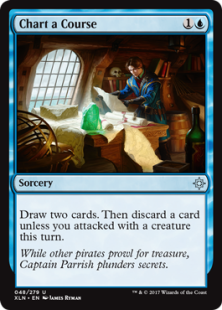 Chart a Course – Getting two cards for two mana is a good trade off. I don’t think this is a card that you need to rush to play on turn two. I would wait until you're able to attack with a creature so you don’t have to discard anything. 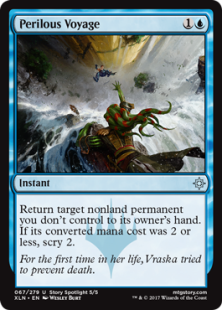 Perilous Voyage – Like with Ixalan’s Binding, having a removal spell that can deal with any permanent is strong. At only two mana, this will be able to deal with pesky enchantments and artifacts that you don’t want to deal with for a turn or two. 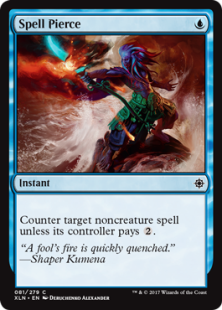 Spell Pierce – At only one mana, this counterspell will be able to surprise your opponent when you cast it on them. There are a lot of great early game enchantments that can take over a game, and having Spell Pierce available to cast with just one mana up can save the game for you. 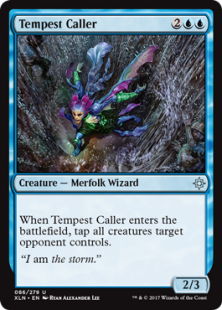 Tempest Caller – If you've seen any of my previous talks on the best commons and uncommons for prerelease, I always pick the card that lets you tap all of your opponent’s creatures. Especially with Merfolk being popular in Ixalan, blue will be more creature based than most sets, which makes Tempest Caller that much better. 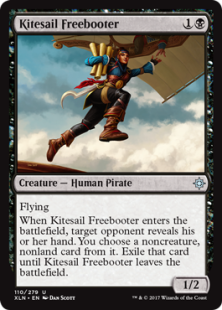 Kitesail Freebooter – What's not to love about Kitesail Freebooter? 1/2 Flying creature? Check! Built-in Duress? Check! Pirate? Check! This Pirate will allow you to peruse your opponents hand, and get rid of their best noncreature threat. 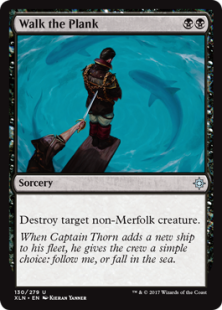 Walk the Plank – If you're playing against an all-Merfolk deck during the prerelease, then just shake your opponent's hand and tell them good job. Chances of a deck being all Merfolk are slim though, so this is almost guaranteed to hit one of your opponent’s creatures for a mere two mana. 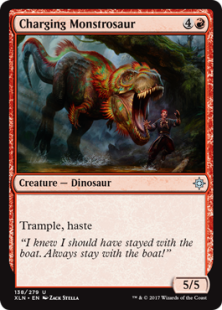 Charging Monstrasaur – Dinosaurs are large and in charge in Ixalan, and this is one of the best you can hope to get. Five power and toughness on a haste creature will make sure that you'll be able to get in some damage that your opponent won’t see coming. There aren't many removal spells able to deal with the five toughness of Charging Monstrasaur. 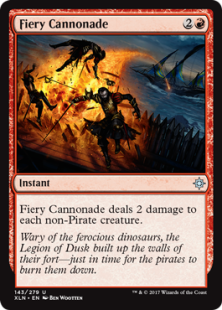 Fiery Cannonade – Some players will be building aggressive Merfolk or Vampire decks, and this is your answer to clearing most of their creatures out in one fell swoop. There's a bonus if you happen to have some Pirates on the battlefield as well. Having this as an instant will also help in combat situations where your opponent’s creatures outmatch yours. 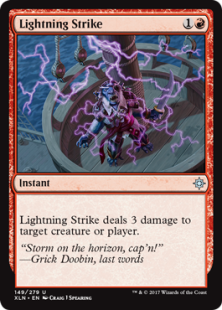 Lightning Strike – Open Fire was such a powerful card in Hour of Devastation, and Lightning Strike takes it to the next level. This powerhouse of a removal spell is back in Ixalan. This is an easy spell to splash if needed and will be able to remove most creatures on the battlefield. 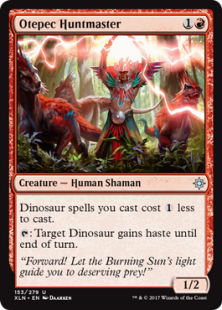 Otepec Huntmaster – This little guy will be seeing lots of play in Dinosaur decks for the next couple of months, which should include this weekend's Ixalan prerelease. There are plenty of Dinosaurs to go around, and being able to play a four-drop on turn three will swing the game in your favour. But that’s not all! You can give that new Dinosaur haste and get in for some damage right away.

Raptor Hatchling – This little Dinosaur is like a creature with Deathtouch. You won’t attack with it often, and your opponent won't want to attack into it and give you a 3/3 Dinosaur creature token. This is a great design to fill that two-drop Dinosaur slot. 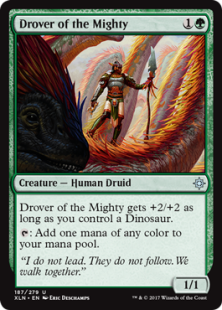 Drover of the Mighty – Like Otepec Huntmaster, this creature is great at making sure that your big Dinosaurs get onto the battlefield sooner than later. Plus, it has an added bonus of becoming a 3/3 creature when you control a Dinosaur. 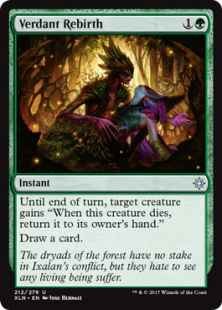 Verdant Rebirth – This is a great cantrip that allows you to protect any of your creatures from dying during combat or because of a removal spell. If it's played on a creature that has an Enter The Battlefield trigger it gains even more value. Plus, you can always pay two mana to cycle it if it's a dead card later in the game. 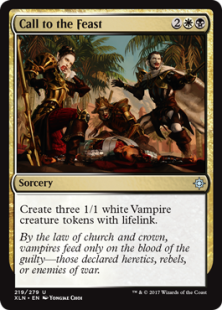 Call to the Feast – Three 1/1 Vampires with lifelink. This will allow you to take advantage of any cards that gain value with Vampires on the battlefield. If you have a Sanctum Seeker on the battlefield you'll make your opponent lose three life and you will gain six life just by these three creatures attacking. 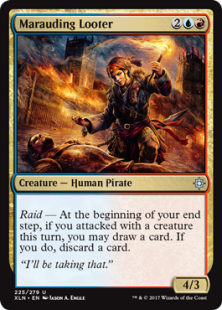 Marauding Looter – I talked about the value of this card last week. Having a reusable card selection engine will allow you to find the cards you need to win the game faster. Even without that ability, you get a nice 4/3 creature to boot. 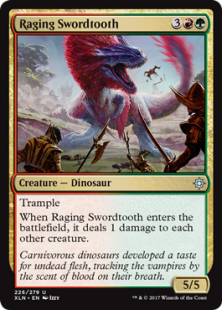 Raging Swordtooth - Welcome to the Enrage enabler. Ignoring the fact that you get a 5/5 Trample Dinosaur for only five mana, this card will clear the path of any one toughness attackers your opponent has, as well as trigger any of your creatures that might have the new enrage mechanic.

You have seen all the most powerful rares and mythics previewed over the past couple of weeks. You now have information about the best commons and uncommons from Ixalan. Tomorrow, we'll take the next step in getting prepared for Ixalan prerelease by looking at the different Limited archetypes available in Ixalan. Thanks again for joining me on the Daily Dose of Ixalan, and I look forward to seeing you tomorrow.