Daily Dose of Ixalan – Treasure for everyone!

Welcome all to the Daily Dose of Ixalan, where today I’m going to be talking about a new token from Ixalan.

For years and years, we only had creature tokens, but this streak was broken with the Gold Token from Born of the Gods. These were only created by two cards though, Gild and King Macar, the Gold-Cursed. A few years later we got the Land Mine Token created by Goblin Kaboomist. This was another non-creature token, but one that was only used by one card. Just recently, Tezzeret the Schemer created the Etherium Cell Token, but again no other card created or used these tokens. Finally, in Ixalan we get a non-creature token that's both created and used by multiple cards in the same set, the colourless artifact Treasure token.

“Tap, Sacrifice this artifact: Add one mana of any colour to your mana pool”

Let me start you off with a creature that only produces Treasure. Let’s look at Prosperous Pirates. 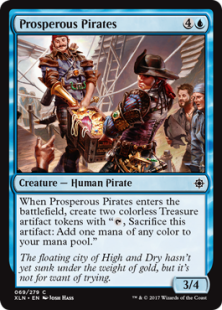 This a very basic example of a card that produces Treasure. You get a 3/4 creature for five mana, which isn’t that great, but you do get two Treasure tokens. These tokens can be used to ramp into something for seven or eight mana the following turn, or maybe help you get mana of a colour that your land doesn’t produce. Later we'll see how Treasure can be used for more than just mana.

The next card is a Pirate creature that will not only be able to get in for some quick damage, but will also provide you with a constant source of Treasure. Here is Captain Lannery Storm. 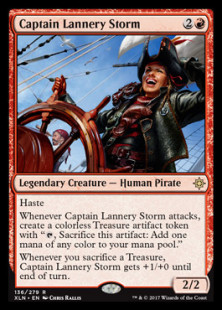 This is an example of a card that both produces and uses Treasure. Treasure can be like an extra resource, utilized by many cards; like Energy, but on a smaller scale. Attacking with this on turn three will allow you to ramp into a five-mana spell, like Glorybringer, the following turn. Plus if you can collect Treasure throughout the game from multiple sources, this could lead to a large surprise attack and win you the game.

Next is another example of a card that will benefit from other Treasures, and be able to produce its own. Here's Deadeye Plunderers. 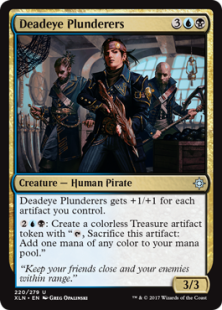 I like that late in the game you can just keep making this creature larger and larger by making one, and maybe eventually even two Treasure tokens per turn. You don’t need to tap Deadeye Plunderers to use this ability, so you can attack with it and pump it in response. If you have a deck that's built to have plenty of artifacts on the battlefield, you should be able to make this quite large the turn that it comes onto the battlefield.

Now that you've seen some of the cards that can produce and use Treasure, I have one last card that could win you the game thanks to these tokens. Let's take a look at Revel in Riches. 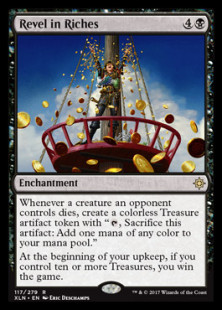 Now, I understand that having ten Treasure tokens on the battlefield will be difficult, but I guarantee that I'll be building a deck that will try and achieve this goal. I can see this card being successful since most of the cards that produce Treasure are already good by themselves. With the right deck, you don't need to use your Treasure tokens for mana. It's an alternate win condition, but it would certainly be an exciting way to win a game of Magic.

I haven’t even gotten into the possibilities of Treasure with Improvise spells, or the fact that you can use them to win the game with Mechanized Production. If you don’t like that plan, you can just use all that mana to ramp to something large instead, maybe Nicol Bolas, God Pharaoh.

Now that you've seen all the cards using Treasure tokens, are you excited? I think I’m going to have to try and make a Treasure token control deck. It's possible that it will be terrible, but also so much fun. Thanks again for joining me on the journey that is the Daily Dose of Ixalan. Join me again next time as I continue to talk about some of the awesome new cards and concepts from Ixalan.