Daily Dose of Kaladesh – Gearhulk up!

Welcome to preview season on the 'Daily Dose of Kaladesh', where the excitement has been coming fast and furious, and I’m not just talking about the crazy vehicles we’ve seen so far. We’ve had Planeswalkers, vehicles, Energy, new characters just to name a few. Now we have something else to get excited about, a cycle of Mythic behemoths! Magic has a history of creating very epic and amazing cycles of Mythic rares in sets. In New Phyrexia we were introduced to the Praetors including cards such as Elesh Norn, Grand Cenobite and Sheoldred, Whispering One. During Magic 2011 and 2012 we were lucky enough to have the powerful cycle of Giants such as Primeval Titan and Inferno Titan. These cards caused a large splash in the Standard scene during their time and we’ve been waiting for another cycle of Mythic rares to stand tall. Kaladesh has brought us that in the form of a Construct cycle of Gearhulks!

Before I get to these awesome new cards from Kaladesh, I want to talk about a certain card that had amazing potential, but not enough friends to play with. Here is my buddy, Eldrazi Displacer.

For months and months, there have a been a few friends to play with such as Reflector Mage, but overall most cards in the past two blocks didn’t have any “enters the battlefield” triggers. There were a lot of Eldrazi that had “when you cast” triggers which made Eldrazi Displacer very sad. Don’t worry little buddy, the Gearhulks are here to make sure you see lots of play in the upcoming Standard block.

Let’s take a look at the white Construct, here is Cataclysmic Gearhulk. 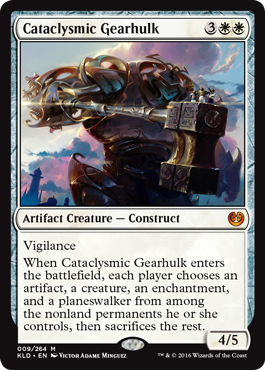 This card is named after, the card Cataclysm from the Exodus set, but thankfully minus the land destruction part of the card. That being said when this enters the battlefield you will be able to choose not only Cataclysmic Gearhulk, but another creature to survive as Cataclysmic Gearhulk is also an Artifact. This is a great creature replacement for those decks that were playing the rotating out Tragic Arrogance. The difference is that your opponent will be able to keep the creature they want, but chances are you will have two to their one creature. This card works really well with our old friend Eldrazi Displacer as you can keep both creatures when you blink Cataclysmic Gearhulk. It also has Vigilance which means you will be able to get in some great attacks while also holding back for defense as well.

Now, let’s have a look at the blue Construct, here is Torrential Gearhulk. 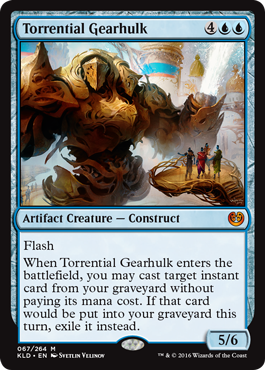 Let’s all welcome Snapcaster Gearhulk! Well it’s quite close, but there are some differences. Torrential Gearhulk allows you to cast any instant card from your graveyard without paying its mana cost, so don’t get too attached to your sorcery cards at this time. That being said, a great advantage is that you are able to pick any instant, regardless of casting cost. So if you have cards like Confirm Suspicions, Scour from Existence, or Spreading Flames, you don’t need to worry about their high casting costs being a problem. This works great as an extra counterspell (as long as you’ve already played one earlier) in the later game while leaving you with a 5/6 creature as well. Our good friend Eldrazi Displacer loves this card and could help it be able to recast all of your instants you’ve already played throughout the game. This blink combo though does have a finite limit to its effectiveness.

Time to look at the black Construct, here is Noxious Gearhulk. 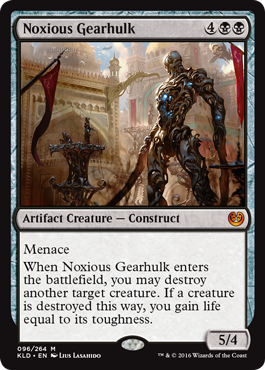 In the history of Magic cards, the number of creatures that have had an “enters the battlefield” trigger that allows them to kill any other target creature with no drawbacks or conditions is zero, until now of course. Not only does Noxious Gearhulk have no drawbacks, it has an upside as well. Being able to destroy a creature and gain life equal to its toughness is huge value in one creature. It also has Menace which makes it harder to block once it hits the battlefield as well. Needless to say, good old Eldrazi Displacer will be huge in combination with Noxious Gearhulk. Being able to pick off any creature that hits the battlefield at will, while also gaining life means game over for your opponent.

Can the red Construct, live up to cards like Inferno Titan? I’ll let you judge, here is Combustible Gearhulk. 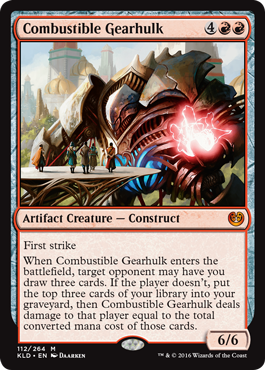 I see this card as a combination of Bedlam Reveler and Sin Prodder, but on a huge 6/6 First Strike body. The option your opponent will choose most of the time is to let the three cards go to your graveyard, but if you have the right type of deck, it could be there downfall. Combustible Gearhulk is not meant to be played in a low-casting cost aggressive Red Burn deck, but in more of a mid-range creature deck like a Mardu build. Needless to say that Combustible Gearhulk pairs quite well with our increasingly popular friend, Eldrazi Displacer. If you blink Combustible Gearhulk enough times you are either going to get a lot of card advantage, or a lot of damage to your opponent’s face.

Last, but not least, we have the green Construct. Here is Verdurous Gearhulk. 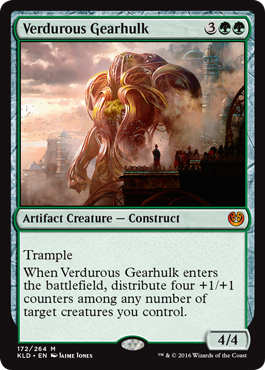 Wow, this is a nice trigger to have on your side. If you have no other creatures in play, then Verdurous Gearhulk can still be an 8/8 Trample creature for five mana. If you have a full battlefield of creatures already than you can choose to pump up any from one to four of your current creatures to get bigger and attack right away. This is a great card to be playing on turn five and will give you a huge board advantage, no matter when it is played. How do you think our buddy Eldrazi Displacer likes this card? Being able to blink Verdurous Gearhulk will allow you to grow your army of creatures with many +1/+1 counters.

Now that Eldrazi Displacer has lots of new friends to play with, it will be interesting to see which ones get played the most. They are all very powerful and will definitely have an impact on Standard. Thanks for reading up on this powerful new Mythic rare cycle from Kaladesh. I look forward to seeing you tomorrow for more great preview action on the 'Daily Dose of Kaladesh'.