Welcome all to the Daily Dose of Kamigawa Neon Dynasty. Today I’m going to be talking about the other major creature type in the new set, Samurai. Samurai are all about attacking alone and giving you bonuses. Most Samurai in Neon Dynasty are in Boros colours, which makes sense as Boros has always had deck archetypes associated with being aggressive. Samurai from Neon Dynasty will be aggressive, but it’s interesting that they are provided with abilities that reward attacking with only one creature rather than your entire team. This means you will want to have one powerful threat with evasion, first strike, or with stats big enough that it won’t die during combat.

To start off I want to talk about a card with one of the abilities for Samurai I mentioned above. Here is Raiyuu, Storm’s Edge. 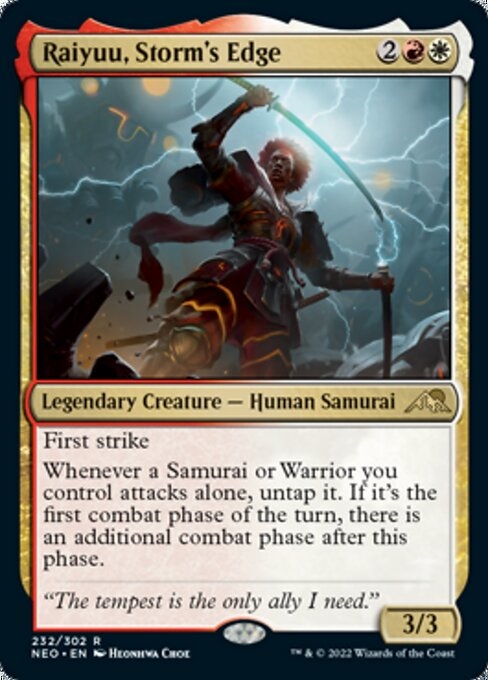 To start off you get a 3/3 first strike creature which makes it great for attacking and often attacking alone. Raiyuu[/ci]'s Samurai ability is insane and has some nice possibilities. Whenever a Samurai or Warrior attacks alone you get an additional combat phase. The best part of this ability is that it doesn’t limit you to reattacking with the same creature. For your second attack phase, you could attack with your entire team if you want. This could lead to some interesting blocking decisions for your opponent during the first attack phase knowing that there will be more attacks coming soon after.

Next up is a legendary Samurai that will help you gain more value from your attack triggers. Here is [c]Isshin, Two Heavens as One.

Isshin, Two Heavens as One 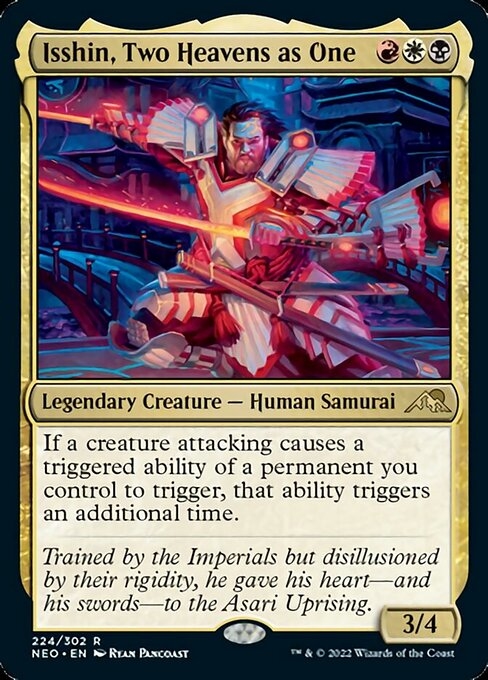 Isshin, Two Heavens as One works very well with the Samurai attacking alone triggers in the set. By itself, you get a solid 3/4 creature for three mana, but it does mean that you must splash Black to cast it. Let’s have a look at some of the best triggers when attacking currently in Standard.

Any creature with Training will get two +1/+1 counters instead of one helping them build their stats quicker. The Avatar token from Awaken the Blood Avatar will deal 6 damage to your opponent with each attack. Who doesn’t want to gain twelve life and add six mana when attacking with Colossal Plow? Attacking with Delina, Wild Mage could lead to some copies of Isshin, Two Heavens as One being created which could lead to absolute madness. Esika’s Chariot attacking will give you two copies of a token instead of one. Goldspan Dragon wasn’t good enough with creating one Treasure token when attacking, so why not make it two instead? Go deeper into the Dungeon with double venture triggers when attacking with Nadaar, Selfless Paladin.

As you can see, there are a ton of options for creatures to play in any deck playing Isshin, Two Heavens as One.

Finally, I want to talk about a card that I consider the Samurai planeswalker for the set. Here is The Wandering Emperor. 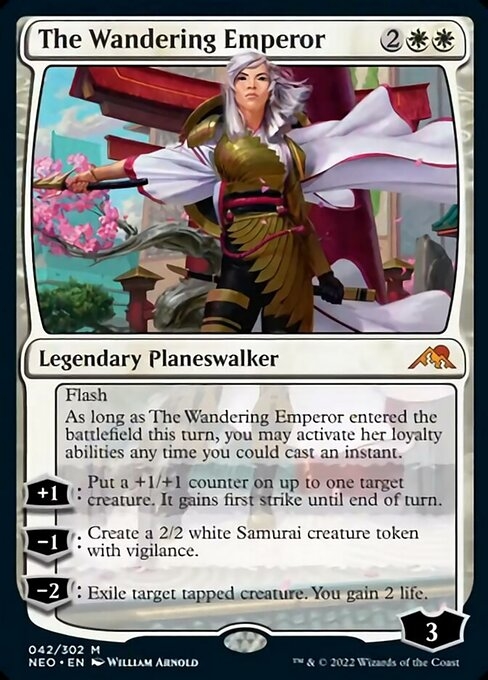 The Wandering Emperor is the first planeswalker ever made with Flash and it has three abilities that act like combat tricks. Let’s break down the abilities of this planeswalker.

As long as The Wandering Emperor entered the battlefield this turn, you may activate her loyalty abilities any time you could cast an instant. – This is the static ability that stirs the drink for this planeswalker. This ability allows you to get two loyalty activations back-to-back before your opponent can attack it or target it. Since it has flash, this will give you three options of how you can win combat scenarios.

[+1]: Put a +1/+1 counter on up to one target creature. It gains first strike until end of turn. – This is the ability you want to use if you already have a creature on the battlefield to pull out a surprise win in a combat scenario. With two activations before your next attack, you can give a creature +2/+2 and first strike for when it attacks.

[-1]: Create a 2/2 white Samurai creature token with vigilance. – I’m happy that this ability only nets you a loss of one loyalty. This allows you to make three creatures over the span of two turns to give you six power to either attack with or to block with and protect your life total and planeswalkers. Giving the Samurai vigilance gives them more value like 2/2 Knight tokens we’ve seen before.

[-2]: Exile target tapped creature. You gain 2 life. – I find this ability simply amazing on this planeswalker. The Wandering Emperor acts as a four-mana removal spell that helps you gain some life at the same time. This is an ability that can help protect yourself without needing to have a creature on the battlefield. If your opponent attacks with two creatures you can use its +1 during combat on their turn to pump and kill a creature then exile a different tapped creature during your turn and still be left with two loyalty on The Wandering Emperor.

As you can see, Samurai are ready to slice and dice you with some cool attacking abilities. Thanks again for reading the Daily Dose of Kamigawa Neon Dynasty. Join me again tomorrow as I finish off the week with a look at some of the new Equipment creatures.