Welcome everyone to the Daily Dose of Ravnica Allegiance! It is Friday here on new mechanic week and we’ve hit the last of the 5 guilds with Azorius. Azorius’s new mechanic is a little bit of an interesting one which like Riot with Gruul will put you to test and force you to decide when to play your spells. Addendum in a new mechanic on instant spells that gives you a bonus if you decide to play them in your main phase like a Sorcery spell.

Before I look at some of the new Addendum spells, I first want to look at the return of a legendary creature. Here is Lavinia, Azorius Renegade. 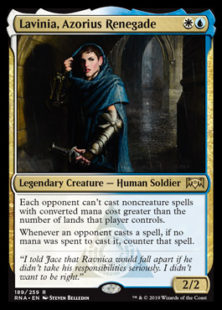 Lavinia, Azorius Renegade is a creature that will have a large impact on Modern and Legacy. This Human can stop Tron decks dead in its tracks. Don’t even get me started on how it will stop Force of Will or Pact of Negation. Will it have an impact on Standard though? When it comes to 0 mana spells, its currently only preventing Mox Amber from being cast. There are a few cards in Standard that allow you to cast cards without paying their mana cost that it will shut down. The best of the lot being Chaos Wand, Omniscience, and Sunbird’s Invocation. If I look at the current Standard format, there are some instances it will come into play. With Golgari Midrange, it stops them from ramping into cards like Find // Finality and Vivien Reid. Against Selesnya tokens, it will stop them from using Convoke to get out cards like Conclave Tribunal early or casting large March of the Multitudes.

The first Addendum spell I want to talk about is like some draw card spells we have seen recently. Here is Sphinx’s Insight. 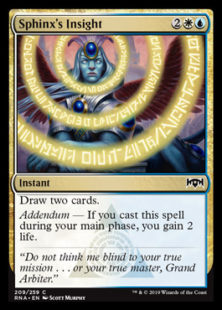 This is an interesting spell that could fill a void in Control decks. It is between Revitalize and Chemister’s Insight. You will always get the instant card draw from the spell, but later in the game you have the option to play it during your main phase to gain 2 life. You will have to ask yourself if you want to be playing this spell over any of the two listed above. Revitalize is often strong since you can play on turn two if you don’t have to use the mana for a Seal Away or Syncopate. You could use on turn four to draw two cards as an instant, but it will lose value compared to Chemister’s Insight which gets you more cards in the long game. Most times you will just cash this in for two cards, which leads me to want to stay away from playing this card in Standard now.

Finally, I want to talk about a card that can gain you major card advantage while letting you put something onto the battlefield for free, but at a price of course. Here is Emergency Powers. 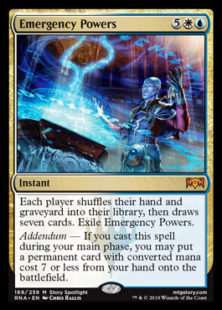 Cards like this have ranged from 3 mana (Timetwister) to 6 mana (Commit // Memory) in recent sets, but never have you been able to cast it at instant speed. (Not including crazy Torrential Gearhulk shenanigans) This alone makes this a pretty powerful spell since now you can be the first one to take advantage of the seven new cards you are going to be drawing. Just be prepared though, as your opponent will also be drawing seven cards as well. With Addendum, there is the option of casting it during your main phase, but you will lose the advantage of playing your 7 cards first. What you do gain is the ability to put a high casting cost permanent directly onto the battlefield from your hand. Here are some of the current best choices for that:

Is giving your opponent and yourself seven cards worth putting a permanent like from the list above directly on to the battlefield? Could there be more powerful permanents to come in Ravnica Allegiance? These are just some of the questions which will define the power level of Emergency Powers.

This mechanic truly has me conflicted. In a color combination which usually involves playing control, you want to give control to your opponent by tapping out during your turn to play an Addendum spell. I think these spells can still be powerful, but it would involve a strong deck build to get it done. Thanks again for joining me this week on the Daily Dose of Ravnica Allegiance. I’ll be back next week to delve into more of the sweet new cards!