Welcome to the Daily Dose of Strixhaven. Today it’s all about making copies. Whether you want a spell to copy itself, copy and instant or sorcery, or copy some creatures, Strixhaven has you covered. With Magecraft being a new mechanic, copying is just as important as casting for this set. Creatures need some copying love as well though. There's nothing better than seeing two copies of your favourite creature on your side of the battlefield, even if it’s a Legendary creature (more on that to come). Here are four of the most fun copying cards from the new set.

First up is a card draw spell. Here's Mentor’s Guidance. 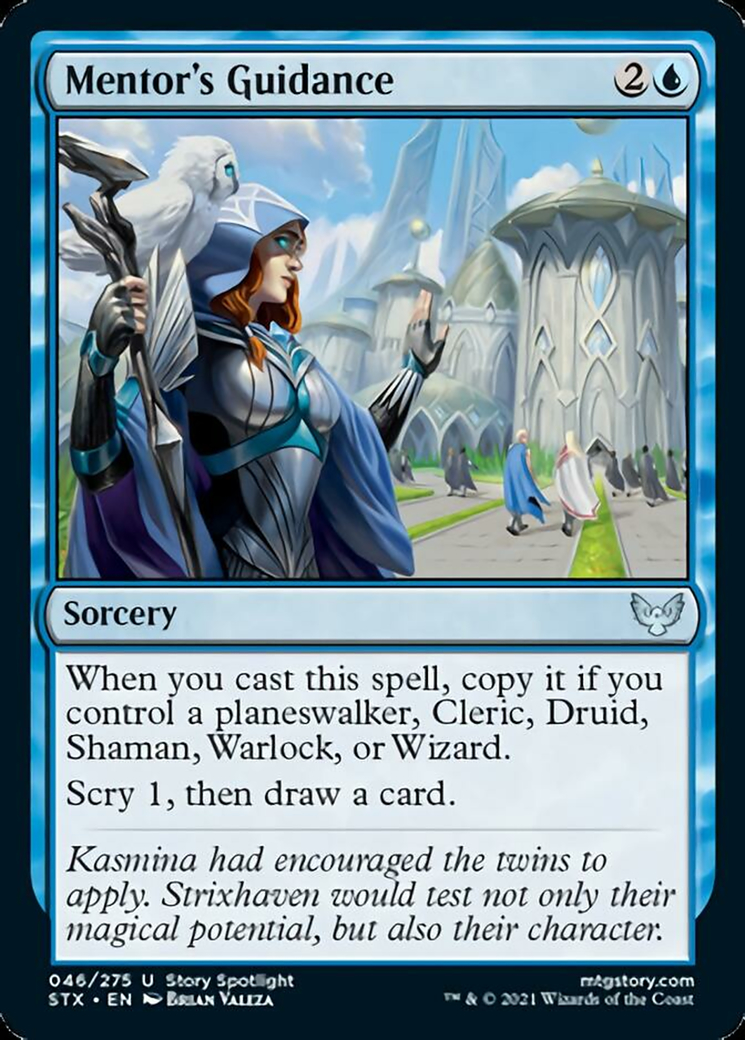 This is one of those card draw spells that you won't cast without meeting the requirements. If you do have one of those though, Mentor’s Guidance becomes better than the average three-mana card draw spell. One of the key things for this set is that if you can copy it, you'll get two Magecraft triggers instead of one, which can lead to additional value.

If you want to copy any instant or sorcery, you can do that with Rootha, Mercurial Artist. 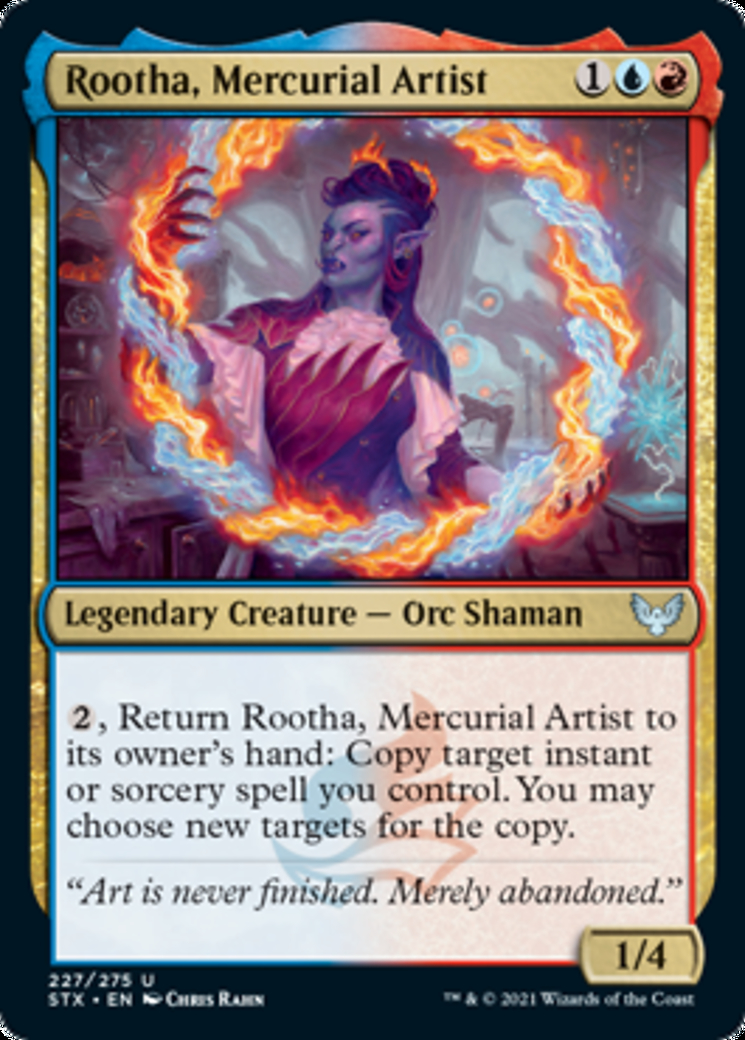 Once you have Rootha, Mercurial Artist on the battlefield, you can bounce it for two mana to copy any instant or sorcery spell. If you want to repeat that process for your next instant or sorcery, you just need to spend five more mana over the span of one or two turns. This is a nice creature to have on the battlefield to threaten your opponent with. Its four toughness also helps as a blocker until you need to bounce it to copy a spell.

Next up is Modal DFC that has a potentially large creature on one side and a super clone effect spell on the other side. Here's Augmenter Pugilist and Echoing Equation.

I’ll start off with Augmenter Pugilist. It starts off as a 3/3 trample creature for three mana, a generally decent body. The big payoff is if you can get eight lands in play, it changes into an 8/8 trample creature.

What I want to focus on though is the super copying ability of Echoing Equation. Have you ever had one good creature and wish all your other creatures were as powerful as it? Now you can with Echoing Equation. You get to take your strongest threat and duplicate it by the number of total creatures you have, and it doesn’t matter if it’s a Legendary creature. This allows you to surprise your opponent by turning a bunch of tokens into attackable threats. This is a “Win the turn” type of card where the goal is to build up your battlefield until this card can help you win with one attack.

Finally, I want to talk about the creature equivalent of Fork. Here's Double Major. 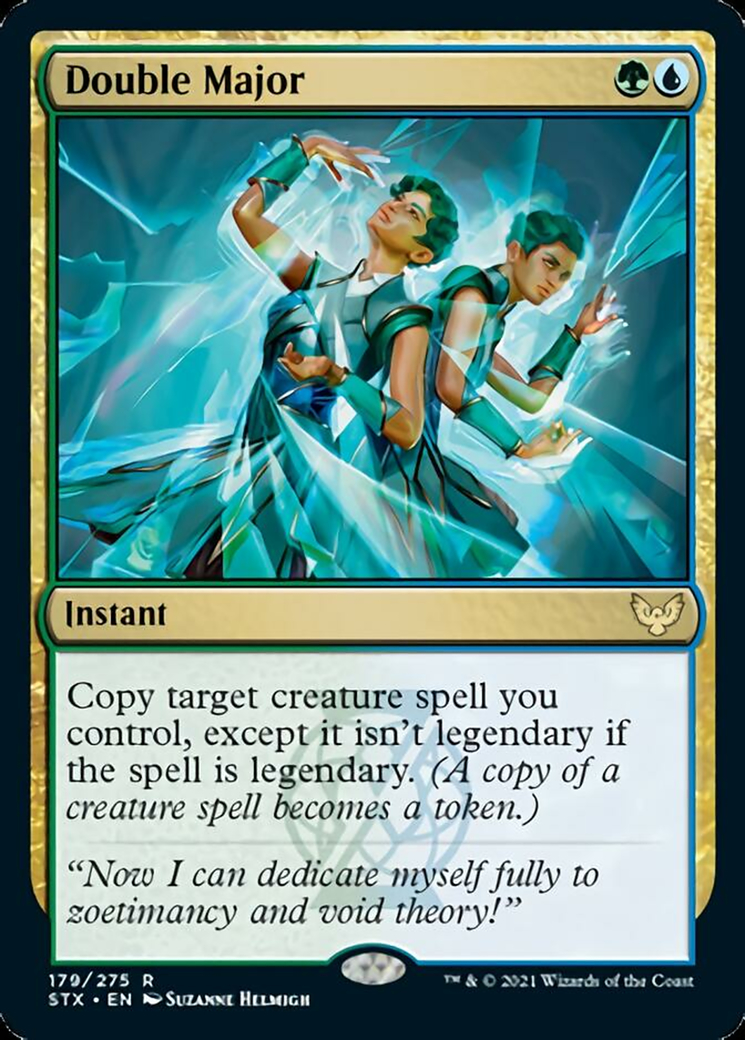 This is one of those high-risk, high reward cards that can be all over the place on the ranking scale. On turn two you won’t be able to cast it to copy anything. On turn three you can copy a one-drop creature which isn’t too bad, but you're paying more than one mana to make a copy of a one -mana creature. With four mana you can duplicate a two-drop which also opens the possibility to start hitting some more Legendary creatures to copy. With five mana or more to use you're really opening the possibilities and the value of Double Major starts to rise. The better the creature you can copy the better.

One of the best parts about Double Major is that you can copy a Legendary creature you cast, and the copy will become non-Legendary. Also, most Clone-like creatures are three mana or more, but at two mana you get a cheaper copy. The only drawback is that you must use it at the time of casting, and it can’t copy a creature already on the battlefield.

In Strixhaven, copying is the way to go whether it be creatures, instants, or sorceries. Thanks again for reading the Daily Dose of Strixhaven. Join me again next week as I bring you the Ultimate Guide to Strixhaven Limited and Prerelease.