Welcome all to the Daily Dose of Theros Beyond Death. I continue prerelease week with some guides to help you at your local prerelease this weekend. Today I’ll be talking about the three precious cards just before your mythic or rare, the uncommons. There are some powerful uncommons in this set and they sometimes might be the best cards in your Limited deck. You get around 18 uncommons in your Limited pool and you want to make sure you get a good 5 to 6 of them to use in your deck. These will often be some of the best cards in your deck that will provide the most consistent value for each game you play.

Here are the some of the best uncommons for prerelease and Limited play from Theros Beyond Death. 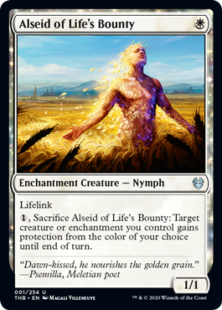 Alseid of Life’s Bounty – This one-drop allows you to gain some life early and have a removal counterspell later in the game. Great double use out of one card. 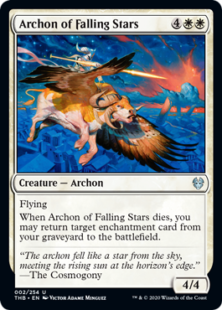 Archon of the Falling Stars – Large flying creatures always rule Limited play, but its ability allows you to recover from an opponents’ removal spell. 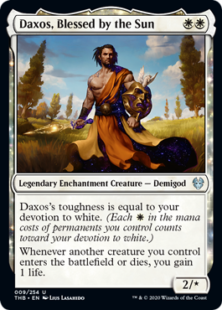 Daxos, Blessed by the Sun – Great devotion count plus a great repetitive ability means great value for this white two-drop. 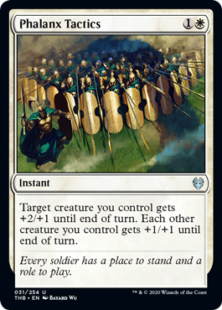 Phalanx Tactics – Two mana is a cheap price to pay to pump up your entire team. Of course you get to hand pick one creature to get that special extra 1 point of power. 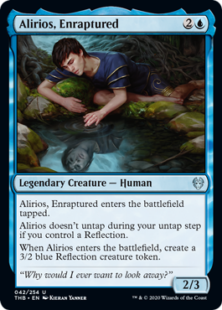 Alirios, Enraptured – You get 5 power and 5 toughness for only 3 mana. True, it is split between two creatures, but well worth it in my opinion. 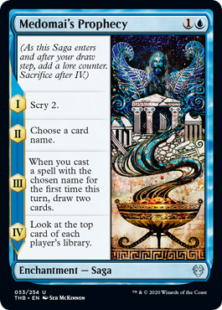 Medomai’s Prophecy – Just an overall great value card for only two mana. Patience is needed to get the value out of this card. 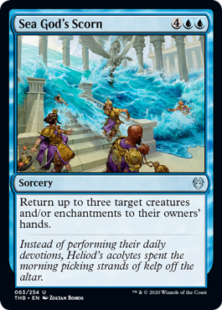 Sea God’s Scorn – This is a huge tempo play for later in the game. It could allow you to breakthrough a stalemate for a large attack. 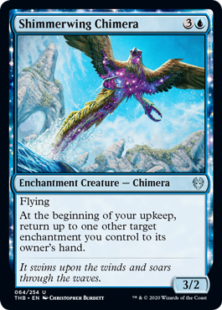 Shimmerwing Chimera – This card triggers well with cards like Omen of the Sea and one of the best parts is that it can’t target itself. 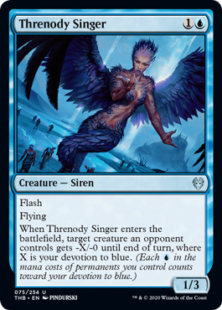 Threnody Singer – This is one of those creatures that can help you take care of two creatures during combat. A great creature trick as I call them! 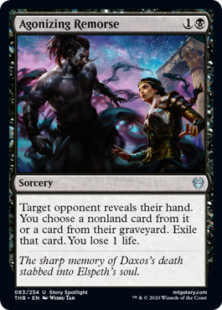 Agonizing Remorse – This acts as a double choice removal card allowing you to either exile a card from their hand or get rid of something with an Escape Casting cost from their graveyard. 1 life is a small price to pay for this card. 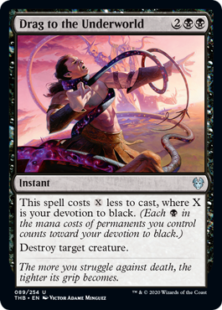 Drag to the Underworld – Most of the time this will be an instant speed removal for only 2 or 3 mana which is strong in any format you play. 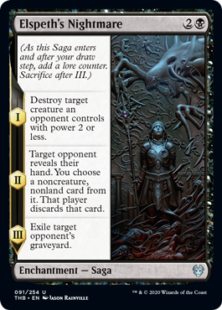 Elspeth’s Nightmare – Another Saga, and another card that provides you value over 3 turns. You get the immediate removal card followed by hand disruption and graveyard hate. 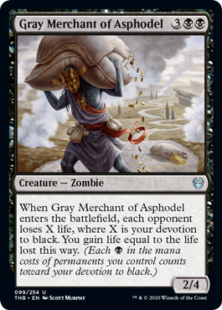 Gray Merchant of Asphodel – I don’t think I need to sell you on one of the best cards in the set. This is a great way to generate a large life swing that will change the fate of most games. 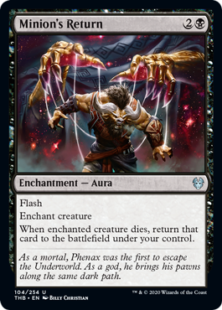 Minion’s Return – This card will force your opponent to think about how they want to approach combat and removal cards. Each decision they make could mean a new creature for you. 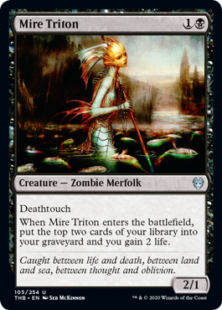 Mire Triton – This is all I love about a Limited creature. It provides value by adding cards to your graveyard, it gains you life, and it can trade up thanks to having deathtouch. 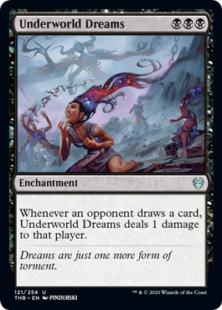 Underworld Dreams – This enchantment allows you to slowly bleed your opponent of their life total while also adding a very strong 3 devotion to the battlefield. 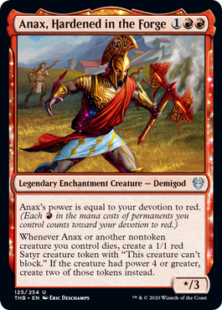 Anax, Hardened in the Forge – Although at its base it has 2 power, chances are it will be much higher once your start attacking. It can also create 1/1 tokens throughout the game as well. 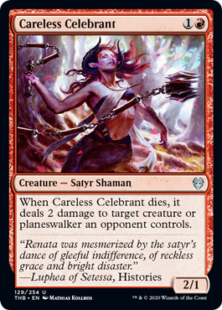 Careless Celebrant – This will often act as a 2-for-1 removal and make it difficult for your opponent to attack into it, or block in fear of it trading up. 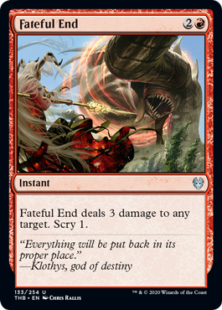 Fateful End – Being able to hit any target makes this burn spell especially great in Limited. Adding on the Scry 1 is a nice bonus. 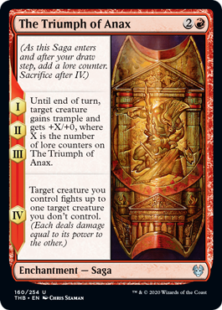 The Triumph of Anax – This 4-chapter Saga just keeps getting better after each chapter. The addition of trample will make sure your opponent isn’t able to chump block your attacking threat. 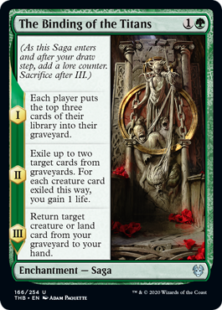 The Binding of the Titans – Another Saga that will gain you incremental value over a couple of turns. Filling your own graveyard means that it’s good to play this on turn two or turn ten. 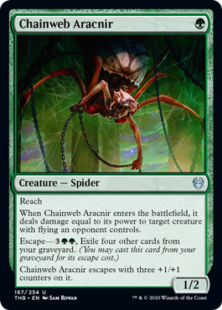 Chainweb Aracnir – Often won’t kill something during its first iteration, but once it becomes a 4/5, flying creatures better beware. 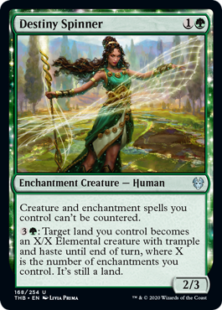 Destiny Spinner – This has a repeatable ability that can be abused with the right deck build. Spinner also offers some protection against counterspells. 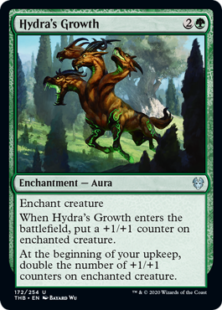 Hydra’s Growth – If left unchecked, this could take over a game. If your opponent can’t deal with this Aura, it can become a minimum +8/+8 after just 3 turns. 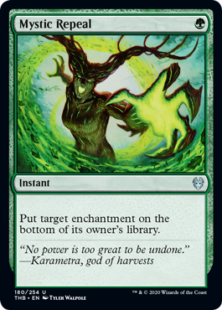 Mystic Repeal – Putting something on the bottom of its owner’s library is basically the same as removal in most games. Not bad for a 1-mana instant. 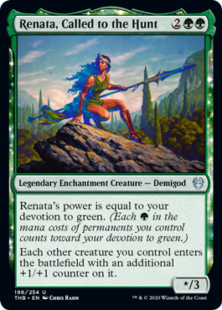 Renata, Called to the Hunt – This Demigod will make all your future creatures just that much better. 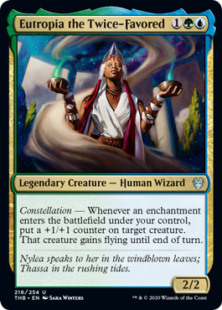 Eutropia, the Twice-Favored – Getting a permanent bonus for every enchantment you play adds a ton of value to the battlefield. Adding in some evasion for some nice attacks makes it even better. 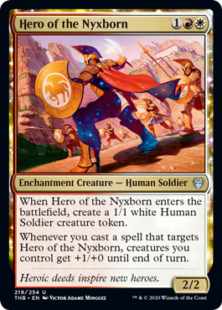 Hero of the Nyxborn – Not only do you get two creatures for the price of one, but you are able to pump up all your creatures with each Aura or pump spell that you play. 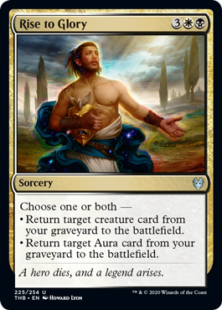 Rise to Glory – This acts as a double resurrection spell giving you two permanents for the price of one spell. 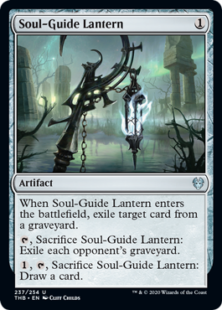 Soul-Guide Lantern – A great main deck card as it can take care of some graveyard threats and replaces itself it that’s not needed for your current opponent.

Now you're set up with a guide for the best commons and uncommons for Theros Beyond Death Limited! Remember that these uncommons will make the heart of your deck, so make sure you give them the respect they deserve! Thanks again for reading the Daily Dose of Theros Beyond Death. Join me again tomorrow as I continue prerelease week with one of my favourite articles to write. That’s right, it’s time for the Theros Beyond Death Guide to Combat Tricks and Removal Cards by Colour.