Welcome all to another week of the Daily Dose of Theros Beyond Death. Today I’ll be continuing to look at the brand-new set coming out on January 24th! Back in Dominaria we were all introduced to a new type of Magic card called Sagas. They are storytelling enchantments which have abilities played out over a couple of turns. With Theros being an enchantment set, it only makes sense to bring back these popular enchantments back into the fray. Sagas are very well-designed cards having players make important choices over multiple turns of play. Some Sagas will have a predictable outcome, but most of them will evolve based on changing battlefields.

I want to start off with the return of Sagas, by a Saga that acts as a very fancy Regrowth. Here is The Binding of the Titans.

The Binding of the Titans 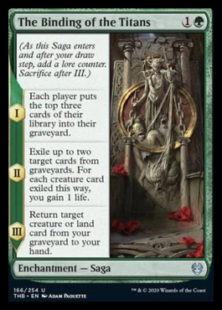 This is a utility Saga that gains more value if you build your deck around it. Let’s break down those abilities chapter by chapter. In Chapter 1 you get the double mill ability, which sometimes depending on your opponents’ deck, could hurt you. Hopefully though your deck is better suited to having cards in your graveyard with some spells that have the new Escape ability. If you do happen to mill some nice creatures into your opponents’ graveyard, Chapter 2 will let you exile them to gain some life in the process. There is always the possibility with this ability to hit nothing and gain 0 life. After a couple of turns we get to the real value of the card in Chapter 3. Thanks to the Chapter 1 mill of three cards, this ability should never be a whiff. Overall you get some medium value out of this card over a few turns which improves to good value if you have a good deck built to support it.

Next up is a red Saga that looks like it should be a white card. Here is The Akroan War. 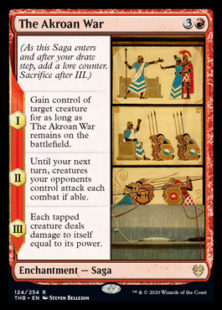 This is Saga which upon first look looks very strong, but then I took another look at each of its abilities. Let’s break down this Saga, chapter by chapter. In Chapter 1 you get to gain control of an opposing creature until The Akroan War leaves the battlefield. First off, this feels like cross between a red and a white ability. A couple of key things to remember about this ability is that it doesn’t untap the creature and it also doesn’t give it haste meaning that you are only going to get 1 attack phase with this creature. The nice part about taking this creature though is for chapter 2’s ability. You can use the creature you took to block the creatures that are forced to attack you. In Chapter 3, there is a chance depending on their stats that you will destroy all the creatures that just attacked you if their stats align correctly. There are a lot of nuances in this card that could improve its value, like if you have a way to give the creature you take haste, or if you have a way to sacrifice for value using cards like Witch’s Oven. This is most likely a build around card, but overall, I think the power level is low for this Saga.

Finally, I want to talk about the new History of Benalia, but for Zombies. Here is Tymaret Calls the Dead. 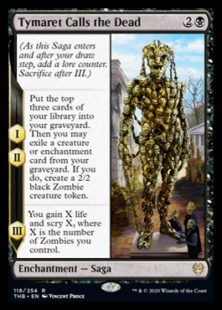 History of Benalia is the first card you compare it against, but there are situations where it can be better or worse than its predecessor. Let’s break down the card chapter by chapter. For Chapters I and II you'll get a good chance to put a 2/2 Zombie onto the battlefield. This can work with such cards as Gutterbones and Cauldron Familiar. If your deck is built correctly, it shouldn’t be an issue getting a 2/2 Zombie during each of these chapters. Compared to History of Benalia, they don’t have Vigilance, but there could be some good Zombie synergies with this card. The big question mark it is its third chapter ability. It doesn’t add extra damage onto the battlefield, like History of Benalia did, but it can help future draws and provide you with a good amount of life gain in the process.

Where Tymaret Calls the Dead has the potential to be an all-star depends on how many good Zombies end up in Standard. So the question is, “Are there any good Zombies in Standard right now?”. The answer is yes! Rotting Regisaur is a 7/6 Zombie Dinosaur which could help you discard some cards into your graveyard to fuel Tymaret Calls the Dead. Foulmire Knight is a cheap Zombie that you can get on the battlefield before casting Tymaret Calls the Dead. Midnight Reaper is a great Zombie but won’t draw you any extra cards from the 2/2 Zombie tokens you create. One of the best Zombies currently in Standard is Murderous Rider. It acts as removal plus a threat on the battlefield.

Now that you have seen some of the new Sagas coming in Theros Beyond Death, what are your thoughts? One thing to note is that we have proliferate in Standard. This could cause a huge shakeup in the value of Saga cards.