Daily Dose of Throne of Eldraine #8 – It’s going to be… wait for it… Legendary!

First off, I want to talk about a Gruul creature that plays with the non-Human subtheme of the set. Here is Grumgully, the Generous. 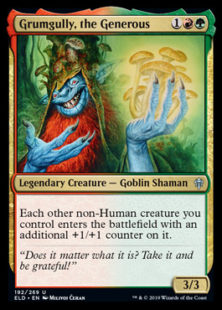 As you can see, all he wants to do is give and give some more. This has some obvious uses in Modern with persist cards, but what can it do in Standard? To start off you get a 3/3 creature for three mana. Seems like a sweet build around card in Limited. The first thought would be with some proliferate shenanigans including using cards like Evolution Sage and Huatli’s Raptor. Another use for it though would be in a deck that has a go-wide strategy like Selesnya tokens or a Field of the Dead deck. Just imagine all those Zombies becoming 3/3 instead of 2/2 creatures. The good news is that there are plenty of good non-Human creatures in this set and already in Standard that you can get value out of this card.

Next is a Legendary creature that looks to be great now and great in a potential Theros set coming in early 2020. Here is Ayara, First of Locthwain. 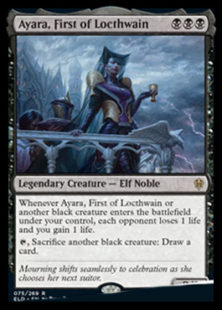 Many players are believing that with the announcement of the return to the Theros underworld in early 2020, that the devotion mechanic is coming back as well. If that is the case, Ayara, First of Locthwain is ready for it in full force. This is another creature that I can see in a few different decks, even with its tougher casting cost. In a Black Red Aristocrats deck, there are plenty of sacrificing options to help you draw cards like Dreadhorde Butcher or any creature with Afterlife. Another use is one that is like what I talked about with Grumgully, the Generous. If you can play Ayara, First of Locthwain in a Field of the Dead deck, each Zombie that hits the battlefield will result in you draining 1 life from your opponent. On top of that you will have a go-wide creature strategy and most likely unlimited creatures to sacrifice to draw more cards.

Finally, a Beast that has a lot of text on the card. Must have a drawback on it, right? Here is Questing Beast. 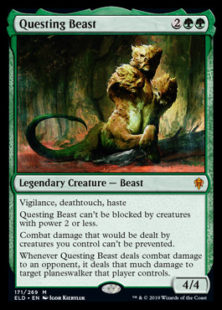 This is one of those creatures where you read it, then read it again to find where the drawback is like Nullhide Ferox. Spoiler alert, there is no drawback! To start off, a 4/4 creature for four mana is already a good deal. On top of that you get Vigilance, Deathtouch and Haste. These stats alone mean that there are no double blocks in which you can save one of your creatures.  Since it has Vigilance, it can be there to block as well, making it a defensive threat with deathtouch. With Questing Beast there is no reason to ever attack a planeswalker since if it damages your opponent, it can also damage one of their planeswalkers. If that isn’t enough, it gets around cards like Root Snare and Dovin, Hand of Control since damage from creatures you control can’t be prevented.
There you have it, three more shiny new Legendary creatures for you to play with in the coming months. Are there any other Legendary creatures in the new set that you are excited to play with? Thanks again for reading the Daily Dose of Throne of Eldraine. Join me again tomorrow as I talk about blue’s need to be constantly drawing cards!