Welcome all to the Daily Dose of Zendikar Rising. It’s my favourite time of preview season when I start writing this guide to help you for Prerelease and Limited. It’s time for the Guide to Combat Tricks and Removal Cards by Colour for Zendikar Rising. Anytime you are playing a new set, the biggest hurdle is knowing what to expect from your opponent. This guide is here to help you figure out what those spells are and how you can prepare yourself. You will see all the possible removal spells and combat tricks that you can use and that can be used against you. Once you have the knowledge of the different spells, it will help you think of better lines to beating your opponent.

To make it easier, I’ve broken it down by colour so you can have easier reference to what you’re looking for.

As usual, White has a few ways to deal with permanents with Enchantments. Nahiri’s Binding locks down a creature while Journey to Oblivion and Skyclave Apparition allows you to exile permanents while staying on the battlefield. One of the few sweepers in the set comes in the form of Ondu Inversion / Ondu Skyruins. It’s expensive but it'll clear absolutely everything off the battlefield.

One thing White is never short on is combat tricks. Allied Assault and Dauntless Unity can help you pump up multiple creatures at once in hopes of getting some two-for-one value. If you want some one-for-one value, Sejiri Shelter / Sejiri Glacier can act as a counterspell to removal. Resolute Strike is a cheap one-mana combat trick that your opponent won’t see coming. Pressure Point can clear the way for your attackers or prevent your opponents’ from attacking. If you are looking for some instant removal Kabira Takedown / Kabira Plateau and Practiced Tactics can deal with the help of the creatures you have on your side. Disenchant is one of the few artifact and enchantment removal cards in the set. If something large is bothering you, Smite the Monstrous can finish them off. 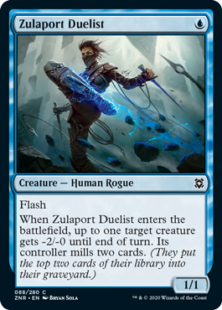 Blue of course has some nice counterspells to help you win the game. There are no actual hard counterspells in the set, but many that force your opponent to pay more mana including Anticognition, Concerted Defense and Jwari Disruption / Jwari Ruins. Negate is a nice reprint to deal with non-creature spells. Bubble Snare is a good lockdown enchantment at either one or four mana. The rare Inscription of Insight can act as a sorcery speed bounce spell for two creatures.

If instant speed combat tricks are more what you're looking for, Blue has them in spades. Chilling Trap will power down a creature and maybe draw a card, while Beyeen Veil / Beyeen Coast can power down their entire team. Glacier Grasp can be a one-turn lockdown. Shell Shield can act as a removal counterspell. The best one of the bunch though is Into the Roil which can bounce any nonland permanent and for two extra mana draw you a card as well. Lastly, blue has two Flash creatures that can surprise you in the form of Living Tempest and Zulaport Duelist.

Black leads the way with seven removal spells, so let’s start with the sorcery speed ones. Bloodchief’s Thirst, Feed the Swarm and Inscription of Ruin can each kill creatures with some of them being able to hit enchantments and planeswalkers as well. Vanquish the Weak can destroy a small threat, while Soul Shatter will make your opponent sacrifice their largest casting cost creature. Both Deadly Alliance and Hagra Mauling / Hagra Broodpit can kill creatures outright with both also having potential mana reductions to their cost in certain situations. Black has a situational sweeper in the form of Shadows’ Verdict.

Black has a few combat tricks to watch out for including the two-for-one possibility of Subtle Strike. Both Oblivion’s Hunger and Malakir Rebirth / Malakir Mire can act as removal counterspells, negating the removal spell and keeping a creature alive. When it comes to creatures, both Demon’s Disciple and Drana’s Silencer can help kill creatures with their enter the battlefield ability. Finally, be wary of the Flash threat Nimana Skydancer.

Red has a ton of damage spells and it starts with the versatile sweeper Cinderclasm. Molten Blast can hit creatures or artifacts. Sizzling Barrage and Synchronized Spellcraft each deal four damage to a creature with one casting two mana and one costing five mana, although Synchronized Spellcraft can also deal some damage to your opponent. Kazuul’s Fury / Kazuul’s Cliffs can deal some damage to any target by sacrificing a creature, while the other Modal DFC Spikefield Hazard / Spikefield Cave can deal only one damage for one mana, but can cause a creature to be exiled.

When it comes to sorcery removal another Model DFC Shatterskull Smashing / Shatterskull, the Hammer Pass can take out two major threats. Thundering Rebuke can deal four damage to creature or planeswalker, but Roil Eruption can target players as well and be kicked for up to five damage. Cleansing Wildfire will help you take out some of the pesky lands of Zendikar Rising.

Other than damage spells, the only combat trick you need to worry about for Red is Inordinate Rage for two mana. Red also has one creature that can deal some damage when it enters the battlefield in the form of Thundering Sparkmage.

As usual, Green has the least cards you need to worry about for removal and combat tricks. Broken Wings is an instant way to deal with some odds and ends of the game. Fighting is Green’s way of killing creatures. Inscription of Abundance and Khalni Ambush / Khalni Territory can help you fight at instant speed. Rabid Bite is sorcery speed, but your creature doesn’t need to fight to deal damage to another creature. Green usually has more combat tricks, but there is only one in this set with Might of Murasa.

Soaring Thought-Thief is the only multicolour card you need to watch out for as a Flash creature that can surprise you for only two mana.

I hope that this Zendikar Rising Guide to Combat Tricks and Removal Cards by Colour will provide some value and insight into what to expect at your first Zendikar Rising Prerelease. Thanks again for reading the Daily Dose of Zendikar Rising. Thanks for following along in the past couple of weeks and I’ll see you again for the next set!