Welcome all to the Daily Dose of Zendikar Rising. Today I’ll be talking about some powerful two-drop creatures coming in the new set. Having a good mana curve for any deck, especially a synergistic deck is important. You need to have powerful early plays to make the later game plays more impactful. Having zero Warriors on the battlefield when playing spells where Warriors matter on turn three won’t get you anywhere. How about having zero Wizards on the battlefield when you go to play Kaza, Roil Chaser? It will leave you with a less valuable ability that isn’t worth much. Being able to play creatures during your first two turns also puts the pressure off if your opponent has an aggressive start to their game.

First off is a Wizard two-drop that can end up as a 4/4. Here is Magmatic Channeler. 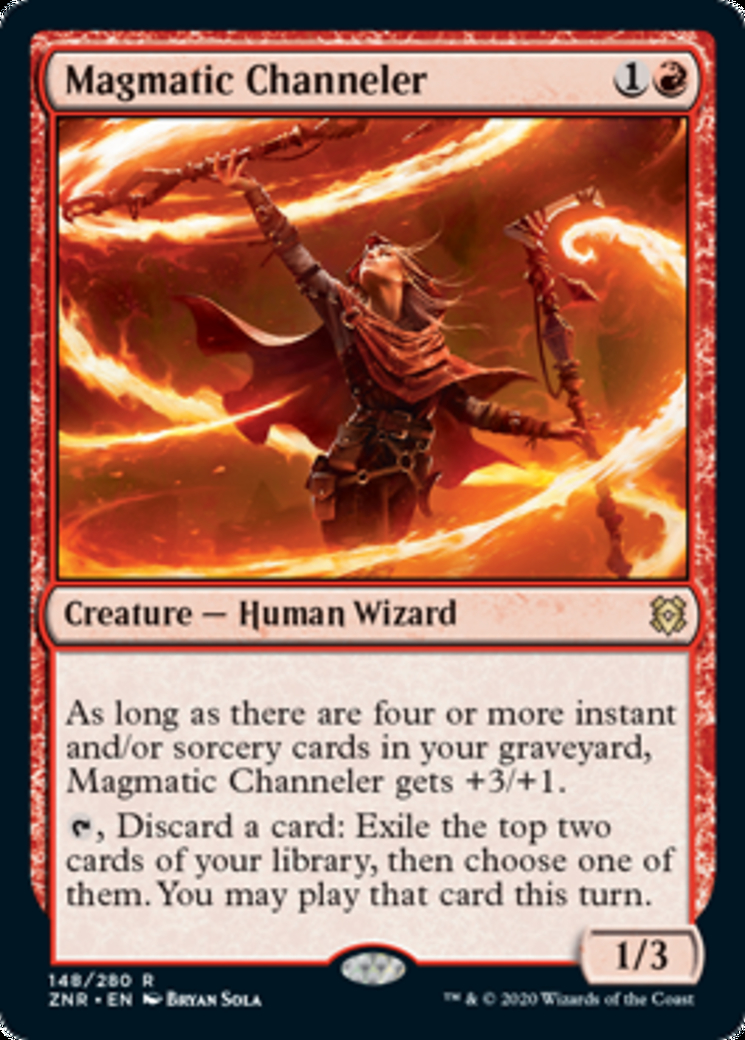 The two-mana slot for the upcoming Izzet Wizards decks is starting to get a little crowded thanks to the addition of Magmatic Channeler. This two-drop can become a 4/4 in no time thanks to spells like Shock and Opt filling your graveyard. Usually, the reverse loot on Red cards involves a one-for-one discard to draw ratio, but Magmatic Channeler adds another level of value. It increases the card selection you receive by allowing you to play the best of the top two cards of your library. Discarding instants and sorceries to this ability will also help you become a 4/4 that much quicker.

Next up is a Cleric two-drop ready to pump up all your creatures. Here is Luminarch Aspirant. 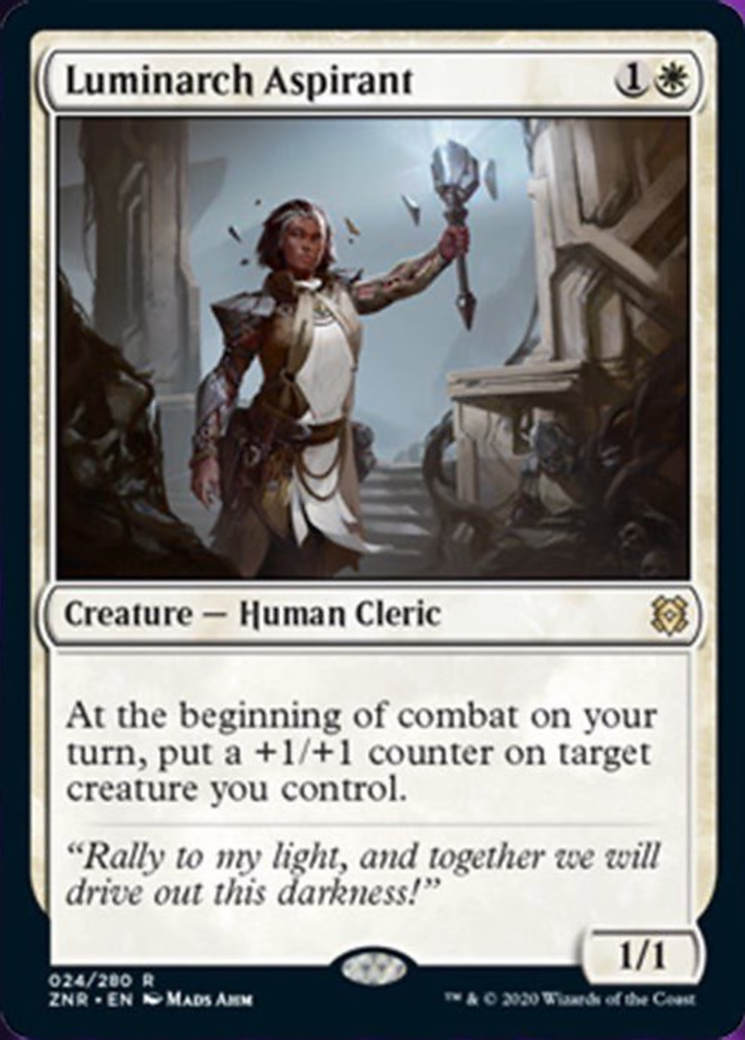 +1/+1 counters are back in force in Zendikar Rising, focusing on White and Green as their main way of getting them and getting value from them. One of the downfalls of those decks over time has been that sometimes you can run out of ways to produce +1/+1 counters. With Luminarch Aspirant, that flaw in the deck is no longer there. You can start adding counters before each combat and growing your army of creatures. Throw in recent cards like Conclave Mentor and the value increases even more. Add in some more cards like Basri’s Lieutenant and Wildwood Scourge and you have the start of a nice Selesnya Counters deck.

Finally, I have a Warrior two-drop with an ability that gives you some choices. Here is Kargan Intimidator. 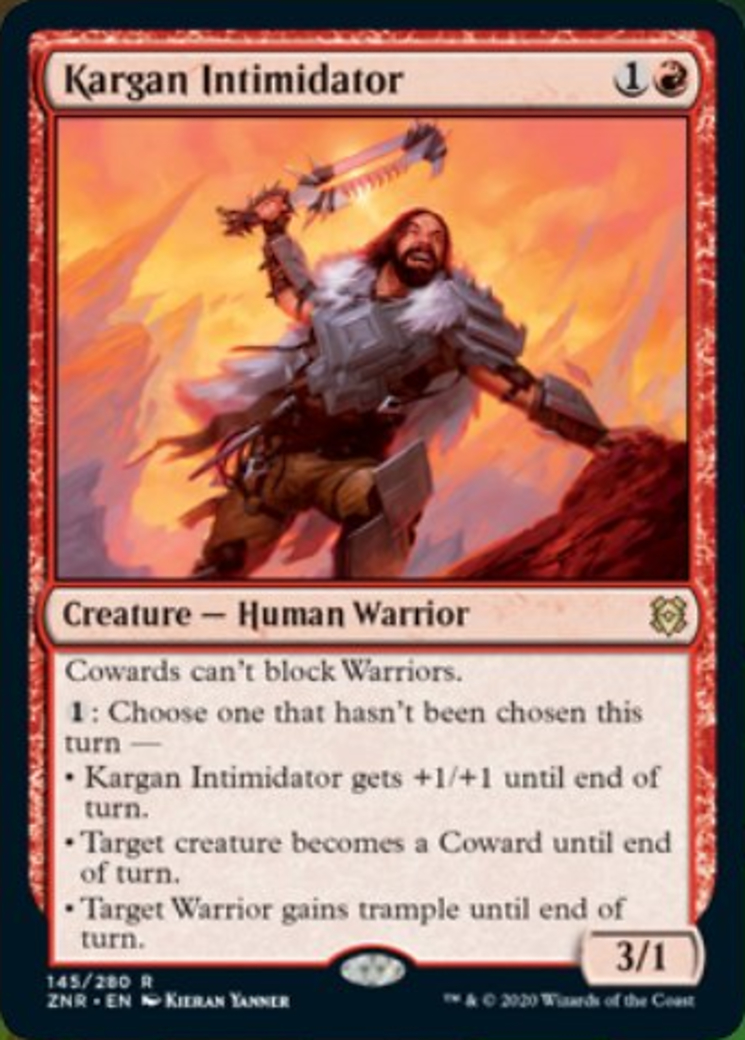 Talk about an aggressive two-drop that can do it all. It can become a 4/2 Trample creature that can’t be blocked by Cowards. Now, that won’t happen every turn, but let’s break down each ability. The first one is simple, in the fact that anytime you want to spend one mana, you can pump it up to a 4/2 creature. This is a great way to get in some extra damage each turn. Next up is the issue where is your opponent has a blocker for Kargan Intimidator. If they only have one blocker, you can spend one mana and swing in with not only Kargan Intimidator but any other Warriors you may have as well. The last potential problem is your opponent having a 1/1 creature to block and chump your attacker. You can spend one mana to give it trample to make sure you get some damage through to your opponent. Sometimes you will want to do that against a two or three toughness blocker, just so you can get in some extra damage to your opponent.

Now you have a few new cards that fit into the two-drop slot of your new deck’s mana curve. Thanks again for reading the Daily Dose of Zendikar Rising. Join me again tomorrow as week two continues with a look at some great new cards.