Welcome all to the Daily Dose of Zendikar Rising. today I’ll be talking about the wonderful world of Artifacts. Equipment aren’t the only Artifacts running around Zendikar, as there are some powerful new Artifacts that all players can use, no matter what deck they’re playing. Some of the Artifacts today are made for formats like Commander, others will thrive in Limited, but they’re all fun new toys to play with. Most of the Equipment we have seen so far are coloured Artifacts, meaning they can’t just be played in any deck you want for Limited. I do like a good number of Artifacts in each set as it helps fill out deck builds across many deck archetypes.

First off is a mana-fixing rock of an Artifact that can duplicate. Here is Skyclave Relic. 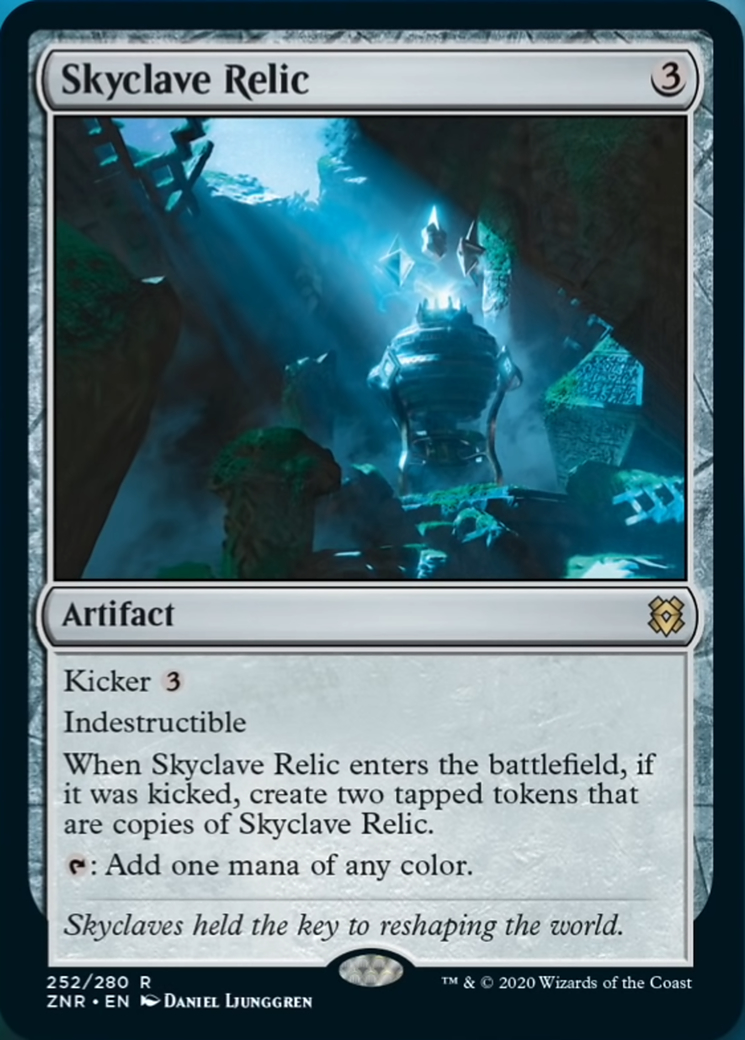 Three mana for a mana rock that can tap for any colour is nice. There doesn’t appear to be a large amount of mana fixing in the set, other than cards that help you search for more lands. After the mana fixing, there are some nice bonuses as well. Skyclave Relic is indestructible, meaning you don’t need to worry about your ramp getting picked off by a Disenchant (which got reprinted in this set BTW). For later in the game, if you have six mana kicking around you can kick the spell and get yourself three copies of Skyclave Relic. Now you can start to cast all the other kicker spells you’ve been waiting to cast. The need for mana is apparent in Zendikar Rising so it’s nice to have Skyclave Relic to help you cast all those expensive spells.

Next up is the ultimate Artifact for colourless decks. Here is Forsaken Monument. 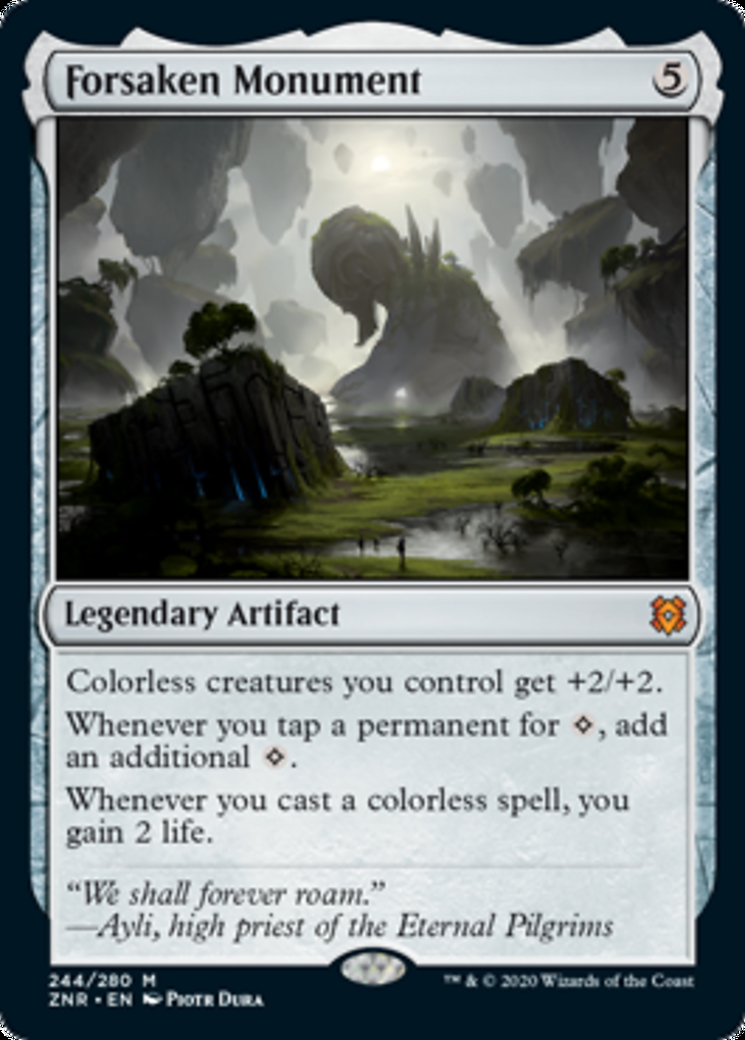 Now this Artifact provides some value town for colourless decks. It takes five mana before it can hit the battlefield, but once it does, it’s the ultimate tool. All your colourless creatures, Artifact or not get +2/+2 which is larger than the normal bump for a card like this. The next line provides you extra mana, with the key being permanent and not land. This means your colourless mana rocks start producing a little more mana than they did before. Once you have this Legendary Artifact on the battlefield, all your colourless spells will start gaining you two life each time you cast one. I see this more like a Commander card than one that will see Standard or even Limited play. It seems like a fun card in the right deck.

Finally, I have an artifact that seems like it’s three Artifacts in one. Here is Lithoform Engine. 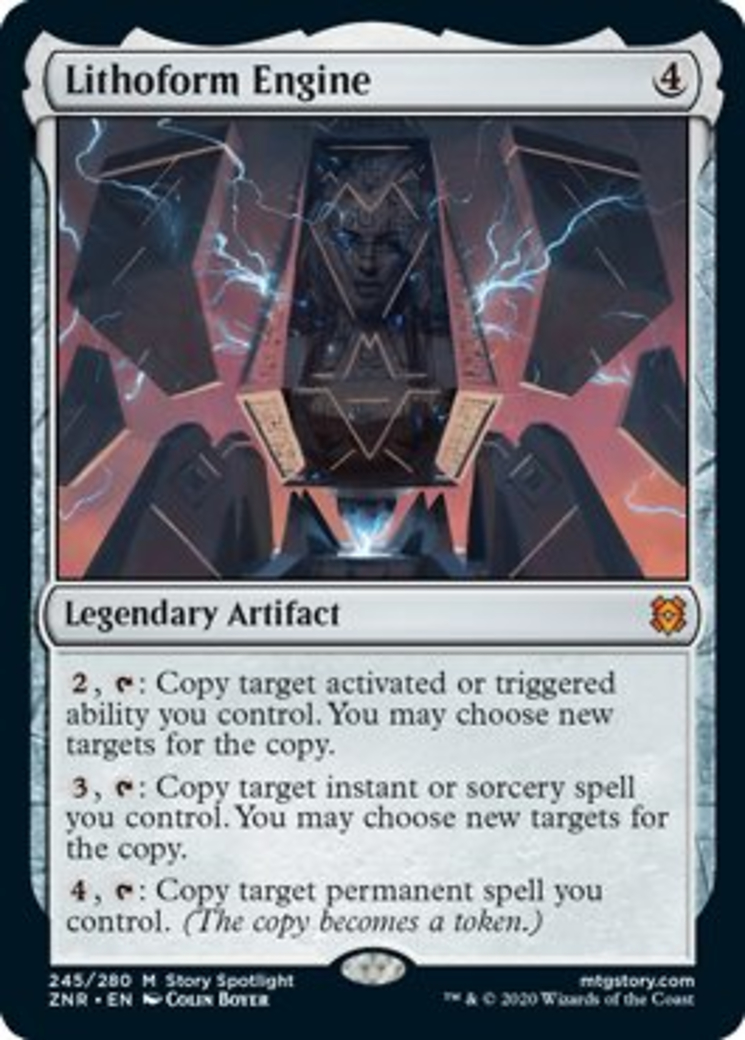 I liked the three lines of text from Forsaken Monument, but I like the three activated abilities of Lithoform Engine even more. This Legendary Artifact does it all, but let’s break down the three abilities. First off for two mana you can copy a triggered or activated ability. Not bad to copy a Planeswalker ability or a sweet enter the battlefield ability you might have. Next for three mana, you can copy any instant or sorcery spell you control. This makes all the spells you cast later in the game have more of an impact. Finally, for four mana you have one of the most powerful abilities I’ve ever seen on an artifact. The ability to copy a permanent spell hasn’t really been seen before and can allow you to have multiple Creatures, Enchantments,  Artifacts, and more! It’s Doubling Season and this Artifact is ready to go off!

There you have it, folks. A few nice artifacts to slot into your Limited decks and some you can build entire decks around. What more can you really ask for? Thanks again for reading the Daily Dose of Zendikar Rising. Join me again tomorrow as we hit the mid-point of the second preview week.