Hi there everyone, and welcome back to the Modern Rogue Report! This is our 21st instalment and I've been recently reminded of the Power Rangers. It was one of my favourite shows as a little dude, and after watching a video on Facebook earlier I got inspired.

That's why we're gonna' kick it back to one of my favourite Modern archetypes today! Although it's not always the most competitive option to go with; Tokens!

When speaking of tokens in a Modern landscape, the typical assumption is B/W. Black and white provide the best options for cheap, efficient token making spells - conveniently most of the tokens have evasion too! However, the madness doesn't stop there.

This time around, we're adding a light splash of blue for the potent four-mana sorcery spell Polymorph. Polymorph allows us to destroy one of our creatures (only tokens, ONE creature spell in our deck!) to reveal cards off of the top of the library until we reveal target Emrakul, the Aeons Torn. This gives us an obvious restriction in deck-building, but it doesn't feel overwhelmingly difficult to work around.

I'd say that the level of building difficulty here is similar to the situation Living End has. This deck can't use creatures spells. That deck can't use spells lower than three CMC, or they'll accidentally cascade into... well, NOT Living End.

Decks like these are forced to get tricky and give em' the old Johnny maneuvers. And personally? I'd like to think the Crouching Token, Hidden Emrakul trick is a pretty darn good one.

Woah! That's right, there's a little bit of red in there too! I guess three Crumble to Dust in the side is pretty darn good.

I really like how this deck has a good amount of life gain in mind. Bitterblossom, Thoughtseize, Anguished Unmaking, and Fetchlands all contribute to our main-board self-damaging. To try to combat this problem, we have Vault of the Archangel, Sorin, Solemn Visitor, and a solo Timely Reinforcements main-board.

So basically, if we can get to the mid-game with three or four tokens and a Vault of the Archangel or Sorin, Solemn Visitor accompaniment, we should be doing juuuuuust fine. Four tokens shouldn't be hard to come by, and keeping a few on the table usually isn't either!

Tokens multiply and get bigger pretty quickly and with six pieces of main-board hand disruption (Thoughtseize / Collective Brutality) we're ready to rip the would-be answers from our opponent's hands.

I'm also a big fan of how this player included blue (obviously for Polymorph) and red so delicately. This adds a ridiculous amount of flexibility when considering sideboard options and I'm already a big fan of the triple Crumble to Dust package.

One thing that does feel missing to me here is Zealous Persecution. It's a neat little 'gotcha' card that I think could make a one or two of appearance in the 75, easily. Another idea is to include some sort of creature-land. Lists that play more blue have been known to use Faerie Conclave because it's cheap to animate, but Shambling Vents is only one more mana.

After all, we're not looking to rely on Polymorphing a creature-land, as this makes for a seven-mana play overall with Polymorph. It is both a pleasure and a luxury to have this option for long grind, late game scenarios.

HOLD UP, did I mention Crouching Token, Hidden Emrakul 2 is coming out?

Scheduled for release whenever you're lucky enough to do so...

Imagine this: You attack with three of your Faerie tokens from a Bitterblossom. Upon announcement of your attack, you activate Windbrisk Heights ability and throw a handful of spaghetti in your opponent's face.

Okay, on the reals, that's not cool. But I'm sure you get my point. Windbrisk-ing in an Emrakul, the Aeons Torn is a life-achievement and I will personally congratulate you. It's fun as heck.

There isn't a ton of technical play involved with this deck. The concepts are simple yet effective.

Have four-mana including one blue and a Polymorph in hand? If it's not going to get countered, make an Emrakul, the Aeons Torn. I hear it's pretty hard to deal with.

Unfortunately, Emrakul's take-an-extra-turn ability is upon cast so we won't get it off of Polymorph. BUT FEAR NOT! This is one more reason to (you guessed it) Crouching Token, Hidden Emrakul. 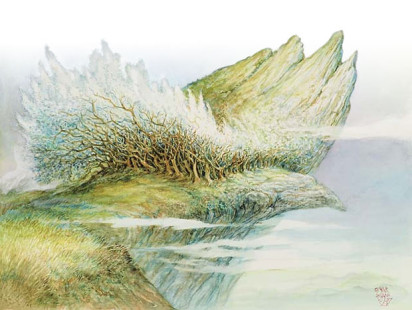 Because Windbrisk-ing in a Big Spaghetti WILL give you an extra turn.

That's it for this week on The Rogue Report! Try it out and tell me what you think! I've certainly been tossing around the idea of playing this at a local weekly, but then again... I'll almost play anything.

I really appreciate all you readers, and I hope you enjoy the content I've been covering! If you have any requests feel free to drop them in the comment box below!

Thanks again for your time and support!
Rogue out.