Well, well, welcome back to the 22nd instalment of The Modern Rogue Report! I'm Cody and this week we're getting super silly again. I saw today's deck pop up recently in tournament finishes, but haven't seen it again since. Regardless, today we'll look back at Horizon Belcher, deck piloted by Kozawa Takuya in the first half of 2017.

Goblin Charbelcher is a notorious artifact from the Legacy format that can make short work of games with the right deck configuration. The less lands you play, the less chance you have to reveal one, the more damage you deal. 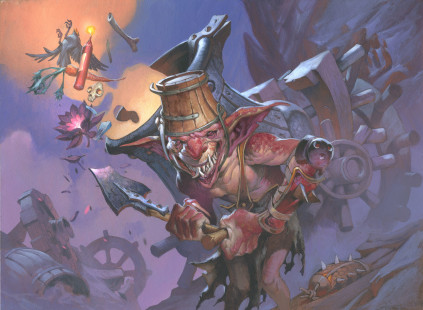 Endless Horizons takes this a step further. Why not just remove all of the lands from your deck? Endless Horizons is endlessly helpful because it helps consistently hit land drops for games that can go a little bit later, and it ensures that there are no lands left in our deck after we play it. When Goblin Charbelcher is activated, it will deal max damage; damage equal to the number of cards in our library.

Remember though, Endless Horizons only works with Plains cards. So if you decide to alter the mana base of the list below, make sure they all have plains in the type-line. Maybe experimenting with Mistveil Plains could be of some benefit?

Game plan number one is pretty obvious; the deck is named after the two key cards. We've already talked about that though. You cast Endless Horizons, remove all the lands from the deck, cast Goblin Charbelcher and one activation is <usually> good enough for lethal.

Otherwise we have some pretty weak plans, but we can always incrementally chip away with a 'belcher if we're unable to get/keep Endless Horizons in play.

Three copies of Secure the Wastes can help us change into a wide-token attack plan. Luminarch Ascension can also help make some angels, providing some filthy sky beats. Elspeth, Sun's Champion can also just take over games by herself and is a fine third win-con for the deck. 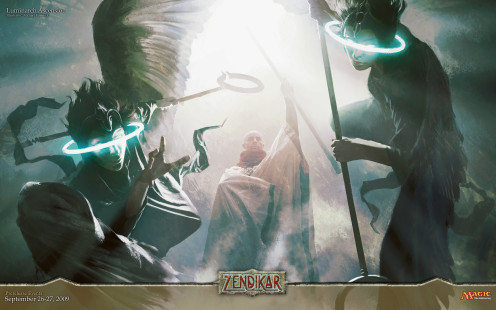 Elspeth's +1 is right in line with our go-wide token aggro plan, and three Soldiers per turn is a pretty tough rate to keep up with. Not to mention they do a heck of a job protecting the Planeswalker herself. Elspeth's minus ability does wonders against the big creatures decks and laughs in the face of Death's Shadows, Gurmag Anglers, Siege Rhinos Primeval Titan... y'know, any of the fun stuff you can encounter in the Modern Wild West.

Lastly, Lady Elspeth's ultimate... well, anyone who played back in Theros Standard remembers this one well. Making an Emblem that reads "Creatures you control get +2/+2 and have flying" is a VERY powerful effect, especially in conjunction with multiple turns of triple-soldier-generation.

I'll admit, this deck is pretty all over the place but many, and I mean MANY decks are proving these days they can keep up with the "Old People's Club" which lovingly includes Tron, Robots, Burn, all the "lifer's".

This deck also has elements of a Prison Strategy (Ghostly Prison, Sphere of Safety, Spreading Seas) mixed with traditional control elements (Detention Sphere, Mana Leak) and a weird little splash of aggressive outbursts. Surely Detention Sphere is a nice card, but something really makes me want to try out the "Oblivion Ring lock".

With three Oblivion Rings (0ne already on the battlefield snagging something) if there are no other legal targets, you can create a loop where you keep exiling Oblivion Rings with the other Oblivion Rings coming back, and if neither player can interrupt the loop, the game ends in a draw. This can be helpful in the rare situations where you just have access to three O-Rings and your opponent will win next turn unless you tie the game.

Or when you want to be an overgrown troll like myself.

All jokes aside, it's probably not worth it. But if we're trying REALLY hard to win, we're probably not sleeveing this pile up anyway. There are just better options. However, it's COMPLETELY understandable to need to express oneself or have some fun showing off a little bit.

I'd like to maybe start experimenting with some other technology to see where we can take this deck. My first instinct is to try some configuration of artifacts plus Whir of Invention to be able to shave down on and tutor Goblin Charbelcher.

Ensnaring Bridge feels like a card that we probably wouldn't mind playing, especially because if we're ever going to be attacking they'll only be a bunch of 1/1's (unless we use Elspeth's ultimate). The sky is the limit to innovating a deck like this.

This is not the most incredibly competitive deck out there, but don't underestimate it. It's worth taking out for a spin once or twice and I hope you enjoy it!

There are a ton of cool new cards coming out in Core Set 2019 and I'm a little more excited now than I have been in a while about Magic. Maybe next week we'll take a look at a rogue Elves build. I'm pretty happy about Elvish Clancaller, or at least reminded of some old ideas I had.

Thanks again for dropping by! It was a janky one but it was fun!

I'll be getting back into some more serious-ish Modern content in a couple weeks as the bulk of my time is going into Standard right now in preparation for Canadian Nationals. To rogue or not to rogue? That is the question.

I appreciate all of your help, time, support and comments;
don't be afraid to discuss and suggest below 🙂