Here are some of the best commons from Throne of Eldraine that you will want to be playing in your prerelease deck this weekend. 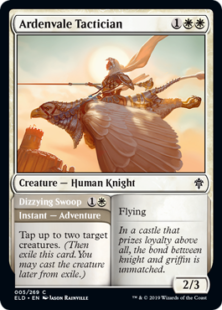 Ardenvale Tactician – This creature would be good enough to play without being able to go on an Adventure. This mean if I have this on turn three with nothing better to play, I’ll still play it out as a creature. 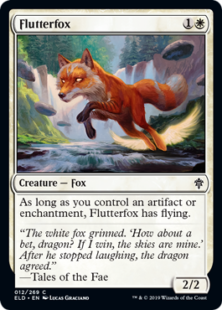 Flutterfox – There are enough artifacts in the set including some nice Equipment, which means it should be easy to make this a 2/2 Flying creature for only two mana. 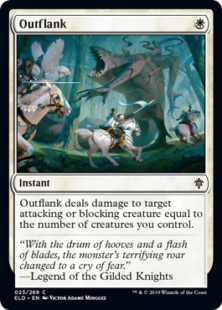 Outflank – One mana removal spells cannot be overlooked, even with its varying amount of damage that it deals. In Limited play this should deal more damage than it would in Standard. 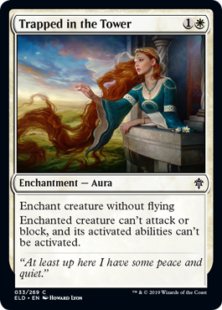 Trapped in the Tower – Even though it can’t be played on flying creatures, it should still be able to shutdown a ton of powerful threats. It even shuts down activated abilities which Pacifism-like cards usually don’t do. 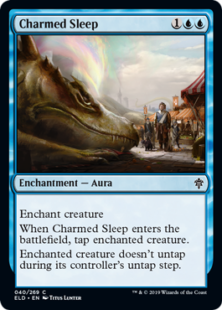 Charmed Sleep - Classic shut down enchantment that will eliminate a large threat on the battlefield. 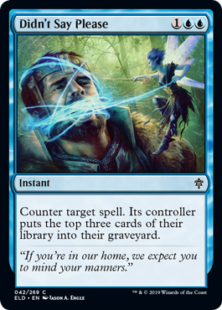 Didn’t Say Please – It’s always good to have straight counterspells for only three mana in Limited. Who knows, you might even mill some of their best cards at the same time. 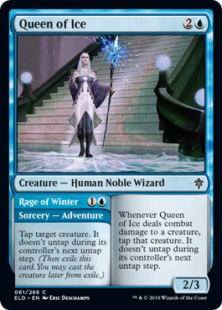 Queen of Ice – This creature will make it hard for you to bounce blocks off it using higher toughness creatures. It’s nice that on curve it can tap down a creature for couple of turns. 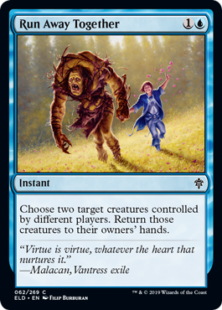 Run Away Together – This is a great bounce spell that you can use in conjunction with your Adventure creatures. This will allow you to send them on the same Adventure again. 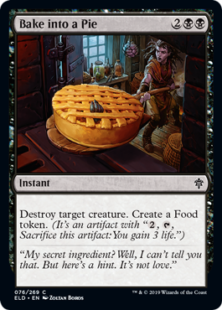 Bake Into a Pie – There is nothing like a straight creature removal spell at a reasonable price for a common spell. On top of that you even get the bonus of a Food token. This card will see plenty of play in Limited games. 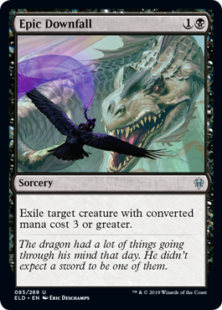 Epic Downfall – I don’t mind this being a sorcery speed removal spell since it will be able to exile a large threat of my opponents. At two mana, you can remove something and cast something big of your own on the same turn. 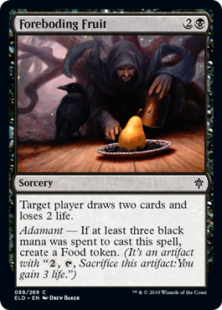 Foreboding Fruit – A classic black draw spell that makes you lose 2 life when you cast it. The difference on this one is that you have the chance to gain life back thanks to Adamant. 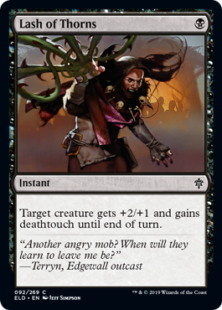 Lash of Thorns – I’m a big fan of this one mana removal spell. Most of the time you will be able to use this to trade up to kill a larger creature. Often unexpected, but always a great result. 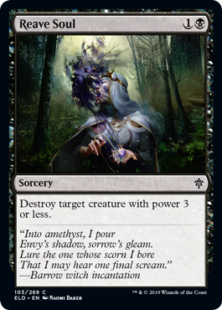 Reave Soul – Although this won’t be able to remove the large threats, there are still plenty of creatures that fall under the power 3 or less category. Make sure this is in your deck to remove those early game creatures. 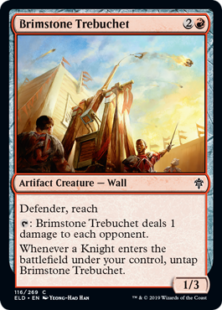 Brimstone Trebuchet – Do not underestimate the power of this card. It provides inevitability thanks to its constant pinging your opponent for damage. Occasionally, if you cast a Knight it can add some extra damage in. The key to this card is that it has reach and can block a lot of those pesky flying creatures that are popular in Limited. 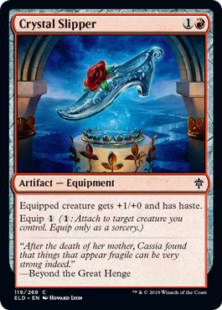 Crystal Slipper – This card would be great if it just added haste for one mana, but throw in +1 power as well and you’re laughing. It will be hard for your opponent to not leave any blockers up if you are threatening an attack thanks to Crystal Slipper. 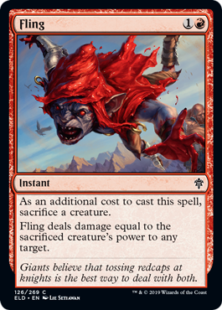 Fling – I call this one the finisher. Often used for direct damage to the face to finish off an opponent. It can also be used as a 2-for-1 spell to take out a pesky creature. 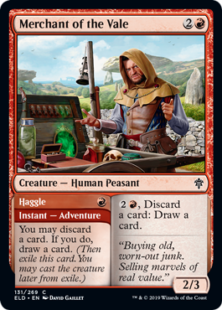 Merchant of the Vale – This is one of my favourite commons from the entire set. It is a great way to cycle out some cards you don’t need early in the game. Once it’s on the battlefield, you can use its cycle ability more than once a turn if needed. 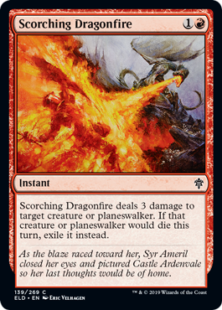 Scorching Dragonfire - Solid removal spell that red needs to be able to deal with early threats on the battlefield. You can also use it to kill a strong Planeswalker as well. 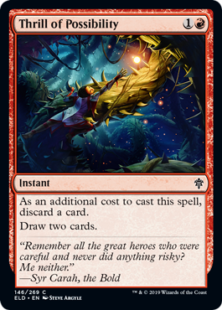 Thrill of Possibility – This is another red spell that allows you trade in a card you don’t need to draw two fresh cards at instant speed. Works well with cards in the set that want you to draw two cards in the same turn.

Fierce Witchstalker – Green is meant to have large creatures in Limited and a 4/4 Trample for four mana fits the bill. The bonus of a Food token will help you with certain synergies as well. 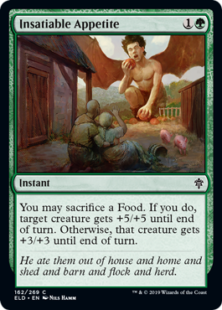 Insatiable Appetite – Having a handful of pump spells to surprise your opponent is often the route to victory in Limited games. The potential of giving a creature +5/+5 for only two mana is huge. 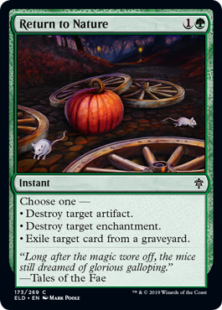 Return to Nature – The best utility removal spell in the set. In most games you will find a use for all three choices on this card. 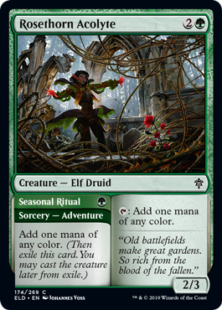 Rosethorn Acolyte – If you are brave enough to try a three-colour deck with no dual lands, you can use this early to go on an Adventure to fix your mana. After that it can help you ramp and get any colour mana you need. 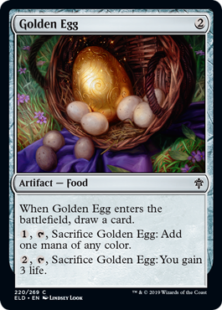 Golden Egg – A great artifact that replaces itself and can be used as a Food with certain cards as well. 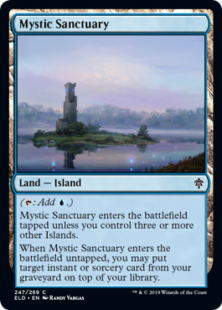 Mystic Sanctuary – Probably the best of the common land cycle as it can get back a key spell that can turn the tides in a game. 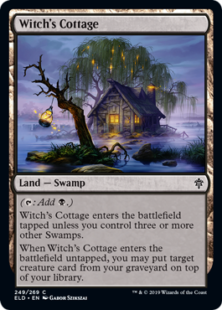 Witch’s Cottage – The next best of the common land cycle as it as well can get back a large threat that they might have already killed earlier in the game.

I hope that this list of common cards can help you choose the best that each colour has for building your Limited decks. Remember that solid commons can win you the game if you pick the right ones. Thanks again for reading the Daily Dose of Throne of Eldraine. Join me again tomorrow as I continue prerelease weekend with my look at the best uncommons for Throne of Eldraine Limited play.