Diving into Dominaria Draft with Arena!

I've been writing a lot of articles about Modern for the last while but I wanted to expand my subject matter. I've been having a lot of fun with Magic: the Gathering Arena lately and have decided to take advantage of the fact that the BETA testing non-disclosure agreement period is over. 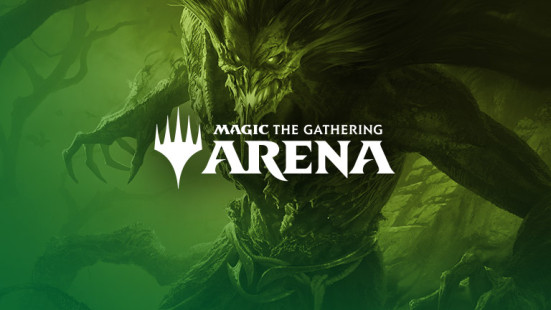 Ever since Arena came out I've basically stopped playing Hearthstone. I still enjoy playing Hearthstone, but Magic is certainly my primary game. Arena suppresses the hunger I have for some sort of "daily" achievement. It's nice to have dailies to do in a game as it gives you a small goal to accomplish often, so you keep accomplishing and learning in the process.

I had my first judging experience during the Dominaria prerelease, so it was the first prerelease I sat out since I've started playing. I did get to play two-headed once, but it was awful as usual and I dreaded most of it, except for opening the packs and hanging with my teammate Jacob.

This meant that I was pretty fresh going into Arena limited. I didn't know most of the cards, hadn't prepared by learning the better archetypes, or anything. I just went in cold and had lots of fun with it!

*I want to apologise in advance for the cell-phone taken snapshots. My computer is rather slow and I didn't want to do a bunch of print-screening and entering and exiting the window for pictures.

Not that it's incredibly interesting without the rest of the pack listed, but I'll list my pick order just to show what came when.

One thing I did find interesting about the draft process was that it was un-timed. In the moment, I kind of just wanted to play and wasn't overly concerned with winning every match. My only concern was to try out Arena drafting and have fun with it. I didn't think about taking my time with no limit and making optimal decisions. Regardless, the result was a respectable deck... I think, and I ended up not doing too poorly with it. It had the potential for some really awesome plays that oftentimes involved a kicker cost.

Here's what I ended up playing:

The formatting of the Draft on MTG Arena is the same as the quick constructed; if you lose three times you're done. If you win seven times, you're done. Play until seven wins, or three losses with a higher prize payout for each additional win.

I took some brief notes about my matches (which are only one game):

This was really weird. My opponent basically did nothing as I smacked them with REALLY sub-optimal creatures.

- I ran a Sparring Construct out, then a Bloodstone Goblin, followed by a turn three Skirk Prospector. Until this point my opponent was still watching. At five-mana they cast a Goblin Warchief, I attempt to Shivan Fire it, and in response they used Blink of an Eye to return the Goblin Warchief to hand.

- I played a Keldon Raider on four, which met a quick Academy Journeymage bounce. I untapped, played a Primordial Wurm and my opponent immediately conceded. Within like a millisecond. Hmph. (1-0)

Vishnu hit all of their land drops but didn't see much in the way of removal. All of my threats stuck and I curved into a nice quick finish. 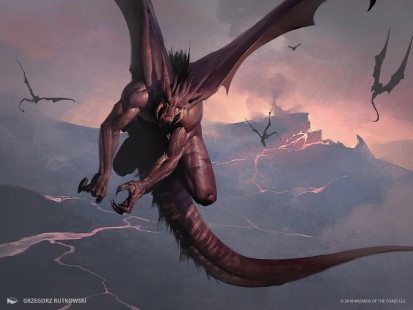 This was a really fun game and that's why I think I have very few notes from it. My opponent's deck didn't seem to be doing too much early on and I got over comfortable. They came out swinging and I was able to Shivan Fire my way and trade tinies until stabilising with a Mammoth Spider and Baloth Gorger on board. Directly after I was able to slam a Primordial Wurm off the top. The pressure was looking fantastic.

My opponent played an impressive response to Primordial Wurm in Darigaaz Reincarnated, who ended up blocking when I attacked in with my Wurm. I thought that because I had top-decked my second Primordial Wurm directly after the first, I'd be able to get something else started while Darigaaz was in its egg (if the opponent decided to block). They did, and we traded. I slammed the next Wurm which was able to be chumped until Darigaaz came back.

At this point Darigaaz returned to the battlefield, my opponent had nine mana, and was able to drop and equip a Helm of the Host onto Darigaaz Reincarnated and double-dragon the smile off my face. Well played. (2-1) 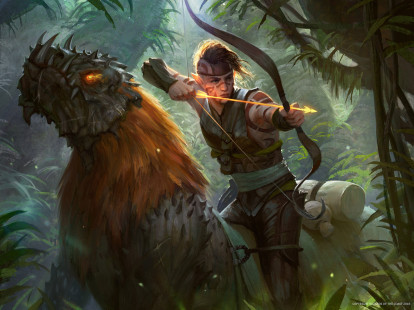 This was a rough one. My opponent Divested me on the play turn one and took Grand Warlord Radha, which was really my only good threat in hand. I did draw into Hallar, the Firefletcher, however.

My opponent slammed a Josu Vess, Lich Knight on turn four, and this is where I fell apart. For some reason, I was convinced it was a 5/4 menace without quickly looking at it to confirm, so I untapped and kicked a Shivan Fire right into Josu! Tight stuff, friends. Tight stuff.

Just to make me feel worse, the game ended with me having five lands in play, two Primordial Wurms in hand and my opponent matching his impressive Josu Vess, Lich Knight with an even more impressive Zahid, Djinn of the Lamp.

Sucks to suck, but we all make mistakes. (2-2)
I need a TSN Turning Point here.

I was on the play and landed a turn three Hallar, the Firefletcher.
My opponent turned around and answered with Jodah, Archmage Eternal.
I sent in the Sparring Construct as I wanted to grow Hallar, the Firefletcher as I was stuck on three land. My opponent blocked and I was able to Shivan Fire to clean up the Jodah problem. From here my opponent drew, passed, I played a Grand Warlord Radha, and was given the match. (3-2) 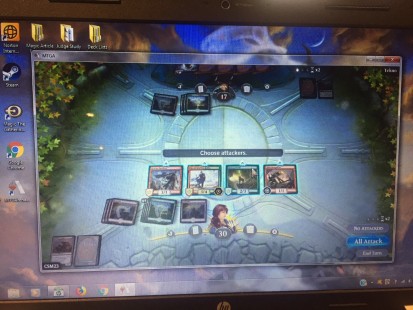 My opponent went first and sequenced a Saproling Migration into Llanowar Envoy and then a Nature's Spiral to get back the Llanowar Envoy that I had Shivan Fire'd.

I kicked a random spell that I didn't write down (I suspect Grow from the Ashes), but I did note that Bloodstone Goblin had +1/+1 and Menace. From here, my opponent made a weird double block to trade with it. With all the mana I had off of one cast, and one kick-casted Grow from the Ashes, I was able to kick a Krosan Druid a couple turns ahead of schedule. It's now 30-17. My opponent did something of little impact again and then quickly conceded when I slammed a Grand Warlord Radha and Keldon Raider one the other. (4-2)

I kept a sketchy hand and got punished. It could have done some neat stuff and with a lucky draw I could have cast bombs earlier, so I went for it. It had Broken Bond and Grand Warlord Radha in it.

Luckily enough, my opponent played out a Bloodtallow Candle right away, so I was able to Broken Bond it immediately and get the mana-jump. Unfortunately, immediately after that I topped four lands and then did basically nothing for the rest of the game. All the while my opponent was doing cool stuff with a Traxos, Scourge of Kroog. I'm sure I missed a piece or two of the fun as I had tuned out. Jeez, I got straight up Mollywhopped. (4-3) 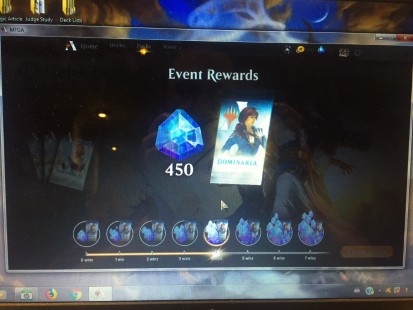 Well, a 4-3 record is good enough for 450 "gems" which you can use to purchase packs or enter drafts/quickplay constructed runs. Here's the contents of the pack I won as well: 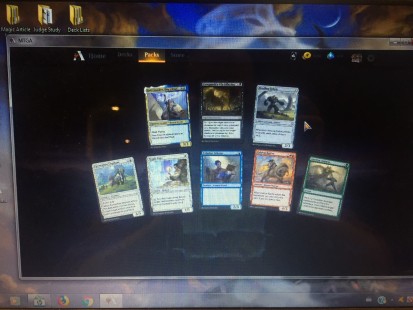 All-in-all, Magic Arena has been fantastic for me. I've really enjoyed playing Draft and constructed in it, and I'm really looking forward to the future of the game.

One thing I've found incredibly useful about MTGA is that it allows people to play who can't or aren't currently investing a lot in Magic. I already travel a good amount for Magic and buy cards often, build decks, and so on. I spend a good amount of money supporting the habit and that's why I haven't really gotten into online yet. I am working toward it, but it's a huge investment to keep up with playing paper Standard, Modern, Legacy, Pauper, Limited AND the same formats online.

What Magic Arena does, is give you the option (currently) of practising these skills in a slick looking program without having to spend money. Now you CAN spend cash, and you'll advance faster if you do, but it's not required and that's nice. Not to mention, MTGA is a great learning tool for new players.

I have a pretty decent halfway build of Mono R and it gets the job done. And in quick fashion, you know, for when you're grinding those coins on a time limit. In and out, get the job done quick.

I'd really love to see MTGA develop into a platform that can support premium events, since MTGO as a program itself even turns me away. It's horrible to look at and it's a little bit tricky to use. I've only tried once or twice, but if I can't play Magic in the first five minutes of using the program, with my understanding of the game... there's an issue.

I can only imagine playing PPTQ's on MTG Arena from the comfort of my own home... Maybe I'll ask Santa this year.

I hope you've all enjoyed my thoughts on MTG Arena and hearing about my first experience with Dominaria draft.

Is R/G kicker a known archetype? What are the identified major players? Have you been having fun with Dominaria?