Should we ban Ancient Stirrings?

That Tron deck just always casts Karn on turn three!
That Krark-Clan Ironworks deck still combo’d me after all the graveyard hate I sided in!
That Amulet Titan player just turn three’d me after I Thoughtseized him! 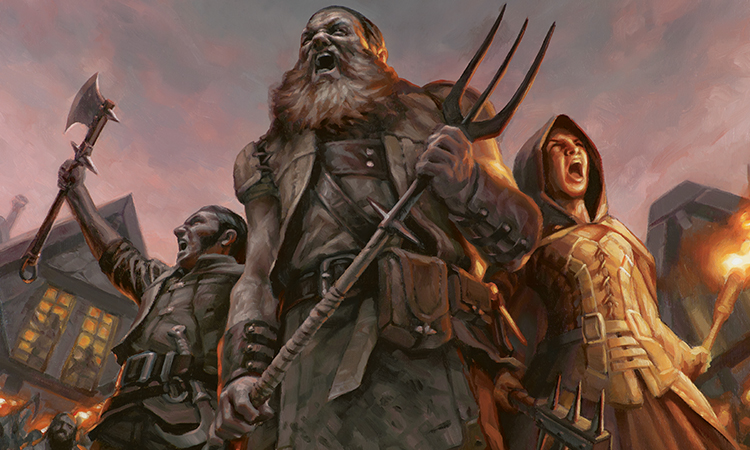 We’ve all heard this before. Whether at your local game store, a competitive REL event, or just from some streamer on Twitch. Modern is by no doubt Magic: The Gathering's premier format for constructed play. It hits all the marks: It’s whacky, powerful, fast, and it’s awesome to watch. The decision trees are comparable only to Legacy, but any deck can win a large event out of nowhere and give you the nostalgia of the early 2000's.

With so much focus on the largest competitive format which is Modern, a topic always lingers with a lot of opinions swirling around it: The Banned List. Currently we're in the midst of a controversial banning debate that could change the direction of the Modern format.

What is currently the issue with Modern? What makes Modern a different format than all of the others?

Modern is currently experiencing "good problems", so to speak. There's a great amount of diversity, and gameplay. Modern decks are unique compared to anything that both Standard or Legacy can possibly offer. Modern isn't a Chess board, nor is it two ships passing in the night; it's a Joust.

Your timing, your decision making, and your uniquely powerful spells will all build to a single moment. That's what makes it amazing to watch on stream, play at FNM, and talk about with all of your friends after your event is over, win or lose.

Why is it important to be effective with the Banned list?

Without explaining in detail what exact rules and regulations for the format are, mismanagement of the banned list can have far ranging consequences. Whether it be lack of needed unbannings or excessive bannings, either can put both customers and investors in a stressful position. Mismanagement of the Banned list, or lack of any management, reflects directly on the company responsible itself and the capabilities they have.

What does it take for the Banned list to be considered optimal?

"Achieving balance" is a phrase that can have a number of completely different meanings. For this reason alone, I hope that Wizards of the Coast refines a concrete method of banning and unbanning cards for the Modern format. As a community, we need to know what should qualify as fair play when sitting across from an opponent. This is also the crux of an argument on the issue of data publishing restrictions. While I'm against hiding data, it's the norm in the world we live in, and time will have to show Wizards of the Coast how incorrect this approach is.

That said, two specific philosophies should be universal for all Banned Lists in Magic formats: 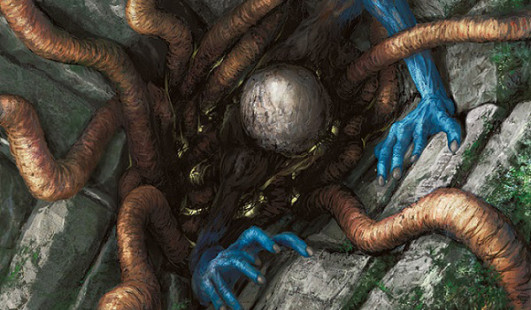 Sure it's ugly, but does that mean it's the bad guy?

So what’s currently wrong with Modern? Why do we need to ban anything?

There is a card, and very specifically, a subset of decks that the community at large wants to attack. These decks are slightly over performing compared to the rest of the field, and are resilient, consistent, and fast. The decks are Krark-Clan Ironworks, Tron featuring Karn Liberated, and the recent Hardened Scales Affinity.

The card specifically in question is Ancient Stirrings. The largest issue at hand is that Ancient Stirrings makes decks consistent. Whether Oblivion Stone or Krark-Clan Ironworks is among the top five cards, the emotional angst attached to this piece of cardboard is high.

My response: “Isn’t that the point?” Consistency is an awkward topic. Since the first Modern Pro Tour, consistency was attacked with the banning of Preordain and Ponder, and in the recent years we've also seen the banning of Gitaxian Probe. Currently, the common comparison is why a card like Preordain is on the banned list. Going back to Philosophy #1, this is the exact reason this discussion at large is popular among social media. Why is Preordain jailed, and why is Ancient Stirrings roaming free?

Here is the fundamental issue with the attack on Ancient Stirrings for a consistency reason: where does it end? If we ban Ancient Stirrings, we open the floodgates to ban any one mana cantrip from Faithless Looting to Thought Scour to Opt. Plus, it's a mechanic that is commonly printed. Just look at Ixalan’s Commune with Dinosaurs. Can you look yourself in the mirror and say if Wizards prints enough good Dinosaurs, we should ban that card too? Green has become the herald of Modern Impulse. This is the new Green colour pie, card selection should not solely belong to a single colour.

Contrary to what most people will say, Ancient Stirrings has an innocent side. It enables some very interesting fair decks.  Take Eldrazi for example. We see the deck come in multiple variants, but Red-Green and Bant are the most likely flavours to show up at your local FNM. Ancient Stirrings is the glue most of these Thought-Knot Seer type decks use, and it's subjective at best to claim that one cantrip should exist in a fair Modern deck, while another fair Modern deck should not have its own specialized and effective cantrip.

With the previous reasoning, it can be assumed that Modern players are not exactly frustrated with the consistency these Modern threats provide, they are frustrated with the consistency, the resilience, and most importantly the speed. Among most of the decks that Ancient Stirrings shows tournament performance, another card shows its ugly head, Mox Opal.

Mox Opal isn’t showing up to do something fair. It’s showing up in Modern decks to break the basic resource of the game: Mana.

When your opponent plays Mox Opal, the goal is to kill you on turn three whether it’s with Sram, Senior Edificer, Krark-Clan Ironworks, or Arcbound Ravager. The decks that have decent performances and use Ancient Stirrings without Mox Opal are Tron and Amulet Bloom. While those decks are resilient and have their amazing turn three plays, they are generally narrow and have matchups that range from extremely favourable to less than favourable. Yet they work on breaking the same fundamental principles that Mox Opal does, they just use a different combination of cards. 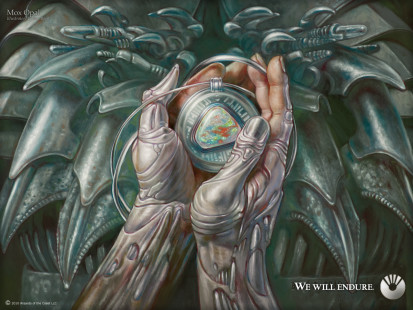 Did you bring Stony Silence to this event? No? Want to Concede?

Modern in general has multiple decks that abuse mana. These include the suite of decks supported by Simian Spirit Guide such as Goryo’s Vengeance, Ad Nauseam, and Mono Red Prison. Any player invested in Modern has been killed by both Krark-Clan Ironworks, and Blood Moon before they have had a chance to react. I find it futile to attack the consistency of any deck before we address all of the non-games that exist within the format no matter how commonly or rarely they occur. Encouraging players to simply out chance an opponent does not create a healthy competitive environment. We saw this specifically in the past with large amounts of accusations towards cheating when it came to Amulet-Bloom. With such high variance decks that cannot be effectively interacted with, we can encourage the worst part of competitive play to show itself.

To stay in line with the basic philosophies that Magic formats should follow, it’s easier to maintain a banned list based for an eternal format on how fast decks operate, versus how consistent they run. This notion also coincides with new designs. There will be more Opt cards printed than Rite of Flame. There is a fundamental reason for it, so we should as a community assess those situations and shave away errors instead of resorting to fundamentally changing the format and it's goals.

There is simplicity in the capability to measure how broken a specific set of cards or deck is if they win the game without ever allowing the opposition to interact on any level. This isn’t the only advantage either. Forcing decks to interact with each other instead taking turns on the roulette table is a very favourable feature for competitive players. It's satisfying emotionally, and gives a foundation to build a mental staircase towards progressing as a player. It's easier to analyze a miscalculation or a misjudgment than it is to make extreme risks with mulligan decisions by playing a gambling game of over or under with your opponent's best draws.

In conclusion, the topic of consistency is nothing short of a pendulum-based issue. Modern should not become a Xerox format, and although I agree for power level reasons alone that Ponder should remain on the banned list, it would be favourable to have Preordain legal with Ancient Stirrings, than for both to share a jail-cell together.

What do you think? What should be changed in Modern? Let me know in the comments section below!