Do you remember Dominaria spoiler season? I do. It was a pretty awesome set, from top to bottom. We got a brand new card type in Sagas, a brand new card designation in Historic, plenty of flavorful cards, and way more value than a lot of people are used to. It was a great way to bring in the new approach to main line sets. 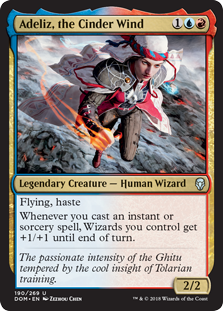 Adeliz here gave me a feeling that very few cards do- the desire to brew like crazy. Much like Fraying Sanity and Raiders' Wake before it, it drove me to build around something that wasn't exactly going to be the huge in the Standard spotlight. What you're seeing here that got me excited is non-keyword Prowess for Wizards.

Considering that most of the creatures that currently have Prowess in Standard at the moment are also Wizards, this really works out to translate as, "every time you cast an instant or sorcery, Prowess triggers twice for each Wizard with Prowess." With spells like Wizard's Lightning and Lightning Strike, you have a deck idea that could be absolutely explosive, if all goes well. By turn three, you can potentially win the game. Isn't that the definition of an aggro deck? But of course this isn't just a Red Deck Wins aggro type. This is Izzet.

For the record, this deck idea is not rotation proof so it's only valid for almost another month. But you had better bet everything that I'll be revisiting this idea in a month or less to come up with a version that will survive rotation.

Izzet Prowess is fairly straightforward. There is some room to play around with it, but the ideal play goes like this: you drop Soul-Scar Mage on the first turn, Spellweaver Eternal on turn two, and then Adeliz, the Cinder Wind on turn three. Hopefully by this point you've also pocketed at least three other burn spells. Turn four is ideally when you're throwing down all four of those Wizard's Lightning spells, burning the player for 12 damage and then boosting your three Wizards by +8/+8. There's a good chance that at least one of your Wizards will connect and give you the win in one fell swoop. Barring that, switching a slow bolt for, say, Crash Through will also help you break through in case your opponent manages to get some chump blockers out.

So what happens if your aggro game doesn't work out? Or if you're up against a really good control deck? You still have a decent mid-range repertoire with additions like Guttersnipe, Disallow, and a brilliant closer in Banefire if you need a Hail Mary to end the game. One thing you should note, though, is that the only non-creature spell you should be playing on your opponent's turn is Disallow. Generally speaking, that is. Since the focus of this deck is burying your opponent under a salvo of spells, you should be saving your burn spells and Opt spells for your turn so you can launch out with an explosive attack.

What do you guys think about this deck tech? How should I build the Sideboard? What do you suggest I should do once rotation happens? Will this deck stay as explosive? I don't think so but I suppose only time will tell.