Death calls you, but shall you answer?

“My friend he took his final breath, now I know the perfect kiss is the kiss of death.” – New Order, the Perfect Kiss

“I mean some doctor told me I had six months to live and I went to his funeral.” – Keith Richards 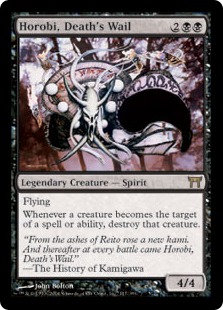 Why should you heed the Death’s Wail?

Why should you flee the Death’s Wail?

Gimme a decklist or DIE!

Good thing I have Endless Whispers in play, now you’re stuck with me forever! More seriously, the decklist is not 100% tuned at the moment. I’m missing a few obvious staples like Solemn Simulacrum, Demonic Tutor and even some pricier stuff like Nether Void and so on. Still, the deck is quite functional, not overly expensive and quite fun to play for a change of pace.

Fine, you can live. How does this work in a real game?

Your commander is vital. You want to cast Horobi as soon as you have Retribution of the Ancients or Phyrexian Splicer. At that point you start clearing your opponent’s board for B or 2, T. Don’t worry about Horobi dying, he’s easily recastable and he will eventually stick. Once the board is clear, you can start swinging for commander damage or just wait until you draw a kill spell. If the match is grindier, it’s possible that the “thousand cuts” your deck inflicts will eventually add up to lethal. This is a slow deck, so early survival through discard, creature removal or so on are vital.

There aren’t a lot of creatures to take the heat off Horobi...
This can be addressed in a variety of fashions, either by adding token producers like Bitterblossom or just adding a combinatory win as a backup plan. Remember that due to Horobi’s ability, your team is going to die. A lot. You can certainly work around this with cards like Dictate of Erebos or Grave Pact or even Eldrazi Monument but this deck’s main purpose is to overwhelm with enchantments and hopefully eke out a win.

What’s the easiest way to beat this deck?

A multitude of early threats will force me into a defensive position I am unlikely to escape from, due to most of my removal being in enchantment form or in the three-plus mana range for spells. Protection from Black is pretty apocalyptic, but can be dealt with through Devoid or Brittle Effigy. Red decks, or decks with a consistent source of targeted burn, will render Horobi but a bad memory.

These cards are mana-intensive, and those colour hosers, wow...

Right. About the colour hosers, since my deck doesn’t play well with white mana or things like Avenger of Zendikar, I decided to cut to the chase and simply add Gloom, since it now reads: “Activated abilities of white enchantments now cost 3 more to play”, it shuts down all those token generators like Luminarch Ascension while making spot removal more expensive Deathgrip stops bomby threats and forces an uncounterable version of Tooth and Nail, for example. Engineered Plague is another token inhibitor and if the other player is on a creature theme deck (such as Elementals) it can slow them as well.

You can always pull the clunkier stuff for more efficient enchantments, or drop the enchantment theme altogether and just turn this into a grindfest. Adding cards like Urborg or Maze of Ith for more Horobi fun is always an option, as are cheaper tutors.

What are some fun interactions and what gets added with Battle for Zendikar?

Horobi and Retribution of the Ancients kills anything on the board. Your commander with Shizo, Death’s Storehouse or Urborg instantly kills a legendary creature or any creature, period. Masticore kills creatures with Protection from Black and serves as a one-sided board wipe. Phyrexian Splicer is a cute two for one. It kills the original creature with a stated ability, then a second creature on the backswing. BFZ doesn’t have a lot for us at the moment, but it did give us some devoid spells to deal with Iona, Shield of Emeria and Retreat to Hagra gets exponentially more powerful if you add fetchlands or Thawing Glaciers. Endless Whispers gets you their stuff and it keeps Horobi in play. Once you add a Solemn or a Pilgrim’s Eye or somesuch, it functions as some weird group hug card. The rest of the enchantments will eventually bleed out your opponents, or you Exsanguinate everyone if you need to. One last fun item is Pestilence with an active Erebos, God of the Dead. I’ll let you ponder that one, it’s highly amusing.
That’s all for now, hope this gives you a little more craziness in your EDH games, and I hope to see some of you #AtTheTower on Saturdays!