So in order to alleviate all your worrying, this article will only cover spells that can go into any Blue deck, and only the cards that will increase the relative power of those decks. I am purposely avoiding overly expensive cards that do not vastly empower your deck here. I want to showcase affordable and effective additions to the majority of your decks. Even if you don’t put all of these cards into one deck, they are all fantastic additions to your collection. They will see play, one way or another.

The colour of thinking, planning, and mind games, Blue is here to provide you with selection and power. Below are both Stock Staples that are tried and true, and Spicy and Powerful cards that are more infrequent. As an additional restriction, I’m going to avoid Counterspells since they tend to be the most common cards found in these decks. 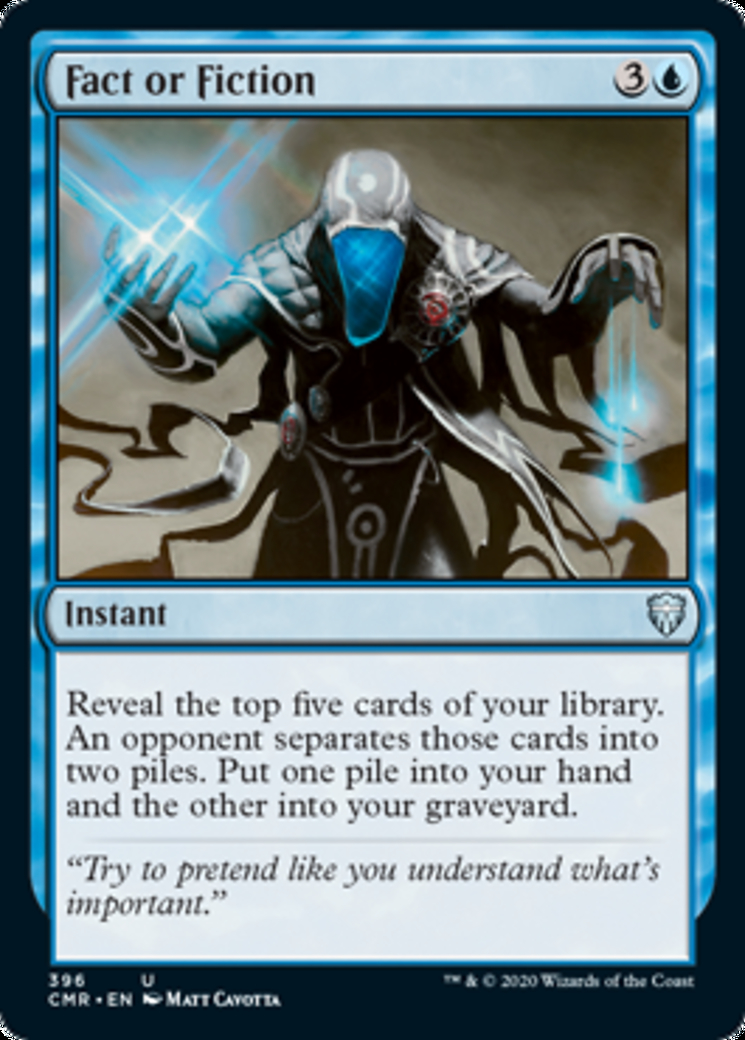 Having a handful of cards is great in most EDH decks, but Blue seeks to get the right ones first. Quality over quantity is the name of the game, and a card like Fact or Fiction allows for both. This card belongs in every Blue deck, and represents an unparalleled shift in game state with a political twist.

Make allies before casting this, or during - either way, you can get a fantastic deal out of it. 5-0 piles are more common than you think with a friend in the circle. Flash of Insight offers fantastic digging in or out of the graveyard, and gets stronger as the game progresses. Finally, the recently reprinted Windfall can instead present an opportunity to make enemies, trading your smaller hand for a bigger one of your opponents. A move that can perfectly line in on Blue aggro strategies. 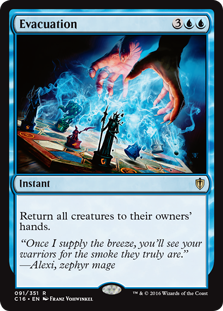 Creature, commander, and board control aren't generally big in Blue’s colour pie, and therefore should be prioritized for slots in your deck. Everyone knows Cyclonic Rift, but its little sister Evacuation should not be easily overlooked. Having an instant speed board bounce should be prized. It even comes at a lower mana cost to boot!

Whether it be token strategies, reanimated creatures, or just arms races - Evacuation can buy you time and safety. If you’d rather be more upfront on your defensive wall, Propaganda is tried and true, but Dissipation Field sets up a different kind of protection by fighting pingers in addition to combat. Up against Mogis, God of Slaughter? Dissipation Field will render him practically useless, among many other punisher cards. 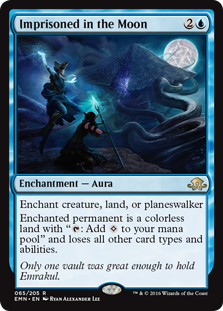 Imprisoned in the Moon

But sometimes you just need your target to go away forever. Blue's not known for removal, but there are some exceptions. Reality Shift is well costed, and exiles! Consider it as an off colour Chaos Warp. For multiple creatures, use Curse of the Swine to cull armies into adorable and ineffective tokens.

Yet commanders are not so easily defeated, and that's where Imprisoned in the Moon comes in. Render the centre of a deck useless as you shift it into a Wastes that returns to the command zone. In a pinch you can also use it to take out Planeswalkers and lands, but most of the time it will shut a player’s leader out of the rest of the game. 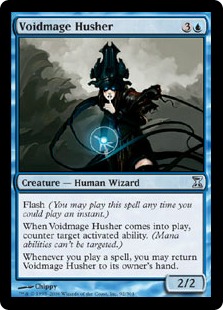 While Voidmage Husher isn’t a card you’ll see on the table often - it does exemplify another Blue concept: Timing is key. Activated abilities can be extremely powerful, and being able to counter them repeatedly is fantastic. Shutting off a Birthing Pod or stopping a Planeswalker’s ultimate can turn the game in your favour, and her easy to activate trigger back into your hand will keep her safe. After your opponent’s know about her, the threat of the stifle effect can be effective to keep strategies at bay.

Speaking of threats causing inaction, Standstill can be a strong political move, forcing people to hold back their spells out of fear of strengthening their opponents. Watch players waste their turns doing nothing as you maintain control! Last on the subject of timing is Misdirection, which can function occasionally as a Force of Will and other times just redirect lethal Banefires. The ability to do it without tapping any mana is what makes this card the ultimate surprise! 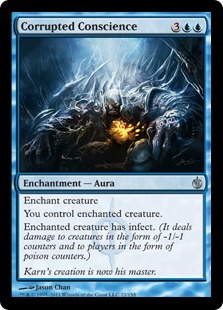 Speaking of taking what isn’t yours, Gather Specimens is here to steal creatures, tokens, reanimated monsters, or even commanders. It’s an impressive instant spell that disrupts combos and breaks down value engines. Though once you start playing it, expect your group to start sweating extra anytime you have 3UU up.

On the slower but more lethal scale, Corrupted Conscience steals creatures with the same finesse as Mind Control but upscales their damage output tremendously. Big creatures are common in EDH, and now you can snag anything 10 or above for a lethal hit, or five and above for two hits. Creatures with haste are also plentiful and can redzone an opponent by surprise. Players tend to dislike infect in commander, and also recoil at the thought of dying to their own creatures. Why not give them both?