Grixis is the home of zombies and powerful wizards, dragons and evil monarchs. Mechanically it's the home of unearth, dethrone, and all manner of graveyard interaction. Its combination of blue, red, and black results in a powerful group of cards that have unique and interesting effects on the game.

Being able to employ spells one moment, bring creatures back from graveyards the next, and bring some of the biggest, baddest, and most fun commanders available to bear means that Grixis is a force to be reckoned with in any game of Commander. 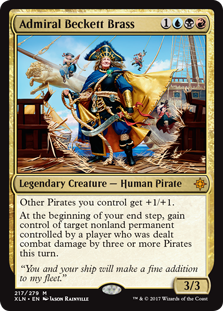 She's the pirate lord we didn't really ask for, but are totally OK with having. It's no picnic trying to get three pirates through for damage on one player, even in EDH, but the good admiral is still a fun commander for a much beloved Commander tribe. 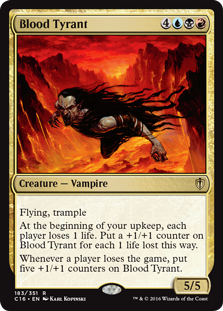 Made for multiplayer, the Blood Tyrant is a giant beater with a crazy win-more ability in a format that really wants to actually win more. Sure, I've never actually seen this card get the five counters from a player dying, but if it does, that's one massive, flying vampire soaring at your neck. Fun in Vampire decks, or anything that cares about +1/+1 counters, Blood Tyrant is classic EDH stuff. 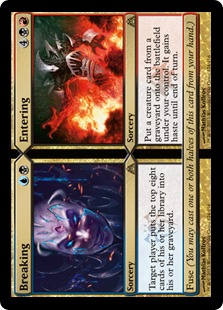 Breaking and Entering is a pretty rare case of a split card where as two stand-alone cards, one of them is completely terrible. As a fused spell it's not all bad, and luckily Entering is a serviceable spell. But really, even if you fuse these together you're not getting a great deal. There are better options if you're in a Grixis reanimator deck, so go ahead and skip this. 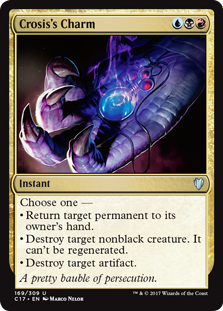 Easily one of the most versatile charms in the many colour cycles we've seen. Crosis's Charm has two very relevant modes (creature and artifact kill) and a third (bounce) that, while lesser used, can still have a big impact on a game if timed correctly, almost entirely because no one will see it coming. Crosis's Charm isn't quite a B, but it's damn close. 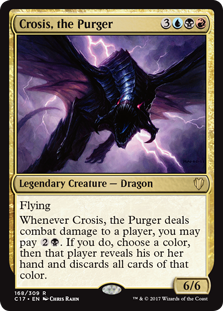 Crosis him/her(?)self is the Grixis dragon in this cycle, and is probably one of the better options behind Teneb and Intet. Almost like a Nicol Bolas Jr. without the upkeep cost, Crosis sits in a nice little spot of acting as a perfect discard commander or a fine addition to a 99 of the same theme. 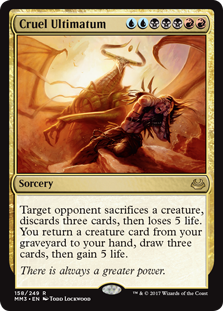 I love the ultimatum cycle and when you talk about Bolas' own, you're talking about the best of them hands down. While it doesn't have the same impact in a multiplayer game as in one v. one, it's still a completely crippling spell to cast on an opponent and can get you back into a game where you were far behind. 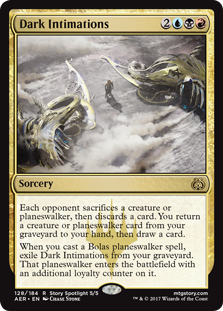 It's like Wizards wanted to make a more fair and less impactful Cruel Ultimatum, and that's exactly what we got. The Planeswalker bonus part of this card seems like a bit of a pipe dream, even in Commander. So, judging this spell just by its first ability we kind of have a slightly worse Crackling Doom with upside, which isn't bad, but also isn't amazing. Good if you run a lot of Nicol Bolas's though! 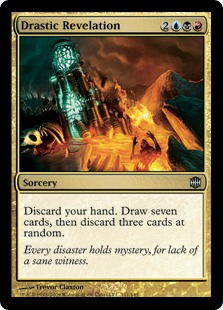 At first glance this seems bad. With an empty hand this card says draw four cards for five mana at Sorcery speed – and while Tidings is a OK card at best, this is actually worse than that because of the times when you do have other cards in your hand.

Or is it!? If you're looking at a graveyard strategy, it can actually be better than a simple draw four spell. All of this is to say it sort of evens out in the end into a mildly playable card, but only in certain decks. 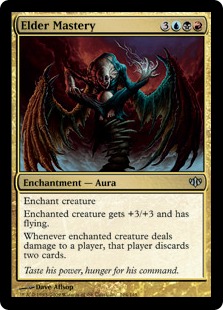 Nicol Bolas really leaves his mark on these colours in a lot of ways. He even has an aura that does a reasonable impression of him!

I like this card in a thematic Nicol Bolas deck or some discard builds, but outside of those it's not really super impressive. 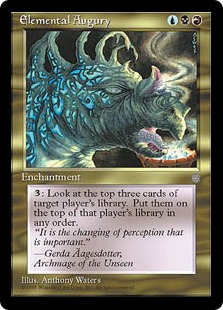 This card feels like it should be green or just blue, but the ability to look at and manipulate the top of your deck can be a powerful one when paired with cards that care about it. That fact that it isn't Scry hurts a bit, but overpaying for Sensei's Divining Top isn't the worst. 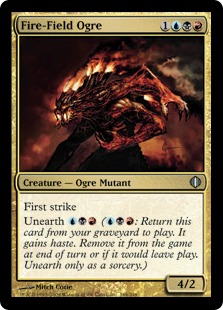 Unearth is a great and underrated EDH ability, but this creature doesn't really cut it in EDH no matter what you're doing. 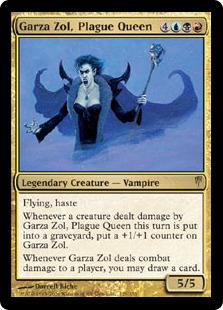 The original three colour vampire commander is Garza Zol, and she's pretty good. The old school vampire mechanic plus a hasty flyer that draws you cards makes her a solid choice in these colours. The seven mana cost is a pretty big downside, but Garza can still lead a pretty mean deck and have a bit of fun at the same time. 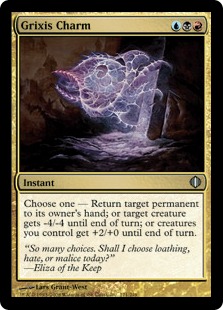 Waaaay worse than Crosis' Charm. I just don't think you can play this in Commander. 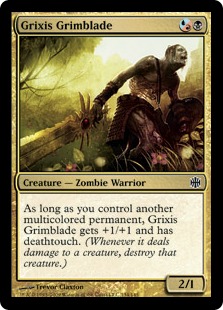 Of all these Alara creatures and their abilities, deathtouch will always be relevant where as first strike, trample, vigilance, and others aren't so much. Still not really playable, but the fact that it's a zombie makes it conceivable that you'd use it in some deck that cares. 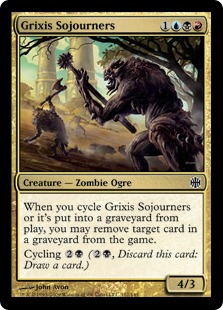 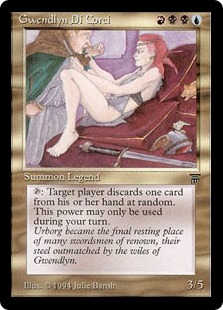 Gwen's ability is actually a pretty mean one and can scare people a lot more than you might think. If someone is holding the one counterspell to protect against a board wipe, or a key combo piece they need to cast next turn, Gwen can totally wreck that gameplan. Or she can make you throw away a land.

A repeatable discard at random is definitely nothing to sneeze at, just be aware of the high variance you'll get on the results. Probably better suited as a 99, though not an awful choice to head a discard-themed deck. 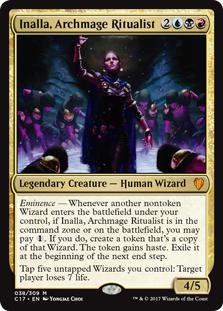 When they make cards specifically for commander I guess I shouldn't be surprised when they turn out to be super fun, powerful, thematic, and flavourful to the max. In other words, Inalla is a great commander for a Wizards tribal with an amazing ability in eminence. 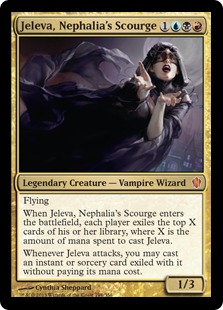 Same thing goes for Jeleva. Just make sure you load up your own deck full of instants and sorceries so that you're never relying on your opponents. I've seen Jeleva decks either run wild over their opponents, or whiff after whiff until they're killed off – rarely in between. So while her ability is great and she is a fun commander, she comes at a real deck building price and gets better depending on who you're playing. 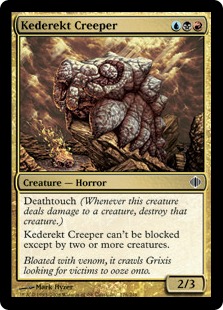 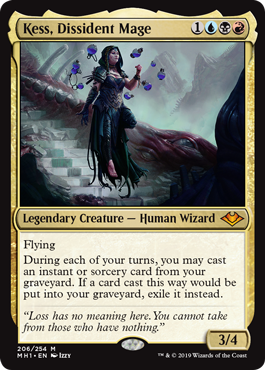 The best commanders are the ones with simple effects that are usable by many decks, and that can employ different strategies. Kess is a perfect example of a card that lends itself to helm control decks, big spell slinging decks, and everything in between. She's a toolbox helper, a focal point, and is as good as the spells you put in the deck. Karador for spells? Thank you, yes please!

I'll be back in two weeks with the Nicol Bolas section of the Grixis review (aka part 2), but in the meantime let us know your favourite Grixis cards and what you think of the ratings so far!