Musings of the Madman: Re-examining Regeneration

Welcome back all! This week we’ll look at a powerful, problematic ability in Regeneration. Last week’s Latest Developments had an internal discussion on the topic. Essentially, it’s being retired because, in David Humphrey’s words: “In short, because it encompasses more things than we'd ideally want (tap, removes from combat, remove damage, sets up a shield), not nearly as egregious as Protection but similar in that way.”

Let’s look at the issues on a one by one basis. When a creature regenerates, it becomes tapped and is removed from combat. It is still considered to have blocked if it had that assignment. However, you can set up a “regeneration shield” with the required mana or cost, which lets the creature soak up lethal and then regenerate. This adds a layer of complexity to the equation that might not appeal to irregular players.

We won’t even get into weird regeneration corner cases like Pyramids, which now removes all damage from a land instead of regenerating and forcing a land to tap in cases where you’d use that artifact to lock down a land through a strange Pyramids + Strip Mine interaction. Let’s begin by examining which colors should get the new regen in the first place.

White: It could work because of white’s ability to prevent damage, but overall this hasn’t been white’s sandbox, so to speak.

Blue: Not really blue’s deal, despite blue being able to break the rules more often than most other colours.

Black:  The perfect colour for this. It has a long history of finding space to keep its creatures alive and it fits thematically as well as black deals with death (and undeath) and has throughout its history.

Red: Red is too impulsive to think about long-term consequences of its actions, it works against preventing damage and just doesn’t fit the overall theme regeneration wants to offer.

Green: Another fine match, green’s preoccupation with growth and nature mean that sometimes its creatures will push past the brink of death to stay alive a few more hours (turns) in their lifespan.

Artifacts: As we’ll see a bit later, care should be taken in attributing permanent (or near permanent) life to artifact creatures.

It’s clear the old-school regen is out of favour with the dev team. There are enough variants out there that they could just codename one and move on though. Let’s look at a few of them:

The “Skeletor” regen: Exemplified by Reassembling Skeleton, you pay a mana cost and have the creature enter the battlefield tapped from the graveyard. This gives a one-turn window to your opponent to attack, but gives you a little inevitability.

The “Squee” regen: Not really typical regen as it needs the creature to be in the graveyard to return on upkeep, you might want to tie a mana cost to it, as was done with Sanitarium Skeleton in the above article. Squee, Goblin Nabob is perhaps too strong and I’m not sure I want to live through another few years of “Squeenix” (Squee with Forbid and Shard Phoenix, but it would make Alex Anderson happy, so hey, why not?

The “Lifeline” regen: Exemplified by its namesake artifact Lifeline. Essentially if you control a creature at end of turn, you return the affected creature to the battlefield. Requires a bit of bookkeeping and might be too strong with enters the battlefield effects.

My preference? The “Skeletor” regen, which is fine without abusive draw engines like Skullclamp around.

In closing, here are a few “Regen All-stars” that might help explain R&D’s hesitancy to go this route again: 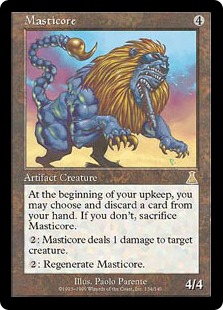 Probably the most egregious of those listed here, a 4/4 body for four generic mana with the ability to mow down an opponent’s army and regenerate for only two? Yeah, that’s a bit much and likely won’t ever see the light of day in today’s Magic standards. 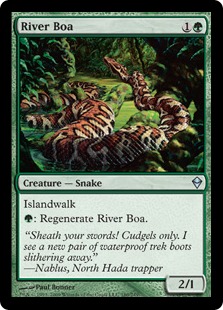 Super aggressive and resilient, the Boa survived combat, burn and also had evasion if your opponent happened to play blue. You needed Quicksand to get rid of it, or you’d lose quickly. 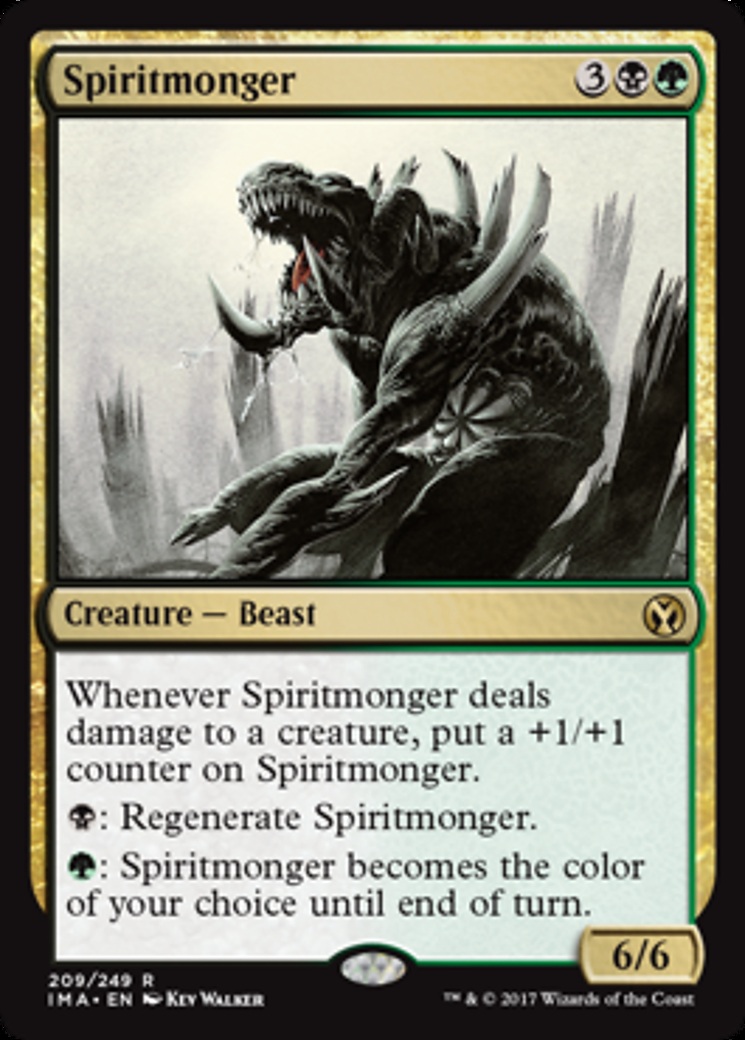 Near impossible to kill in creature combat, able to change color to avoid global removal like Wash Out and regeneration? On a 6/6 for five? They don’t make them like this anymore. Accompanied by its friends Ravenous Baloth and Pernicious Deed, Spiritmonger was the all-star of its era.

That’s it for now! Until next week, may people never try to put you down when it comes to your re-gen-gen-generation.