If you missed the first part of this series that focused on the Mono-Coloured Commanders, take a look right here!

Today we continue to evaluate the new Legendary Creatures of Zendikar Rising! We’ve gone through the Mono-Coloured Commanders with some rather mixed results, but perhaps the multicoloured will fare a little better. To help you get started on your next Commander deck, I’m going to go through each Legendary Creature. I'll be talking a bit about where to go with building them and their overall power level. There will also be a rating as to how much someone can expect to see this card in the format. The higher the score, the more of a staple you can expect the card to be. 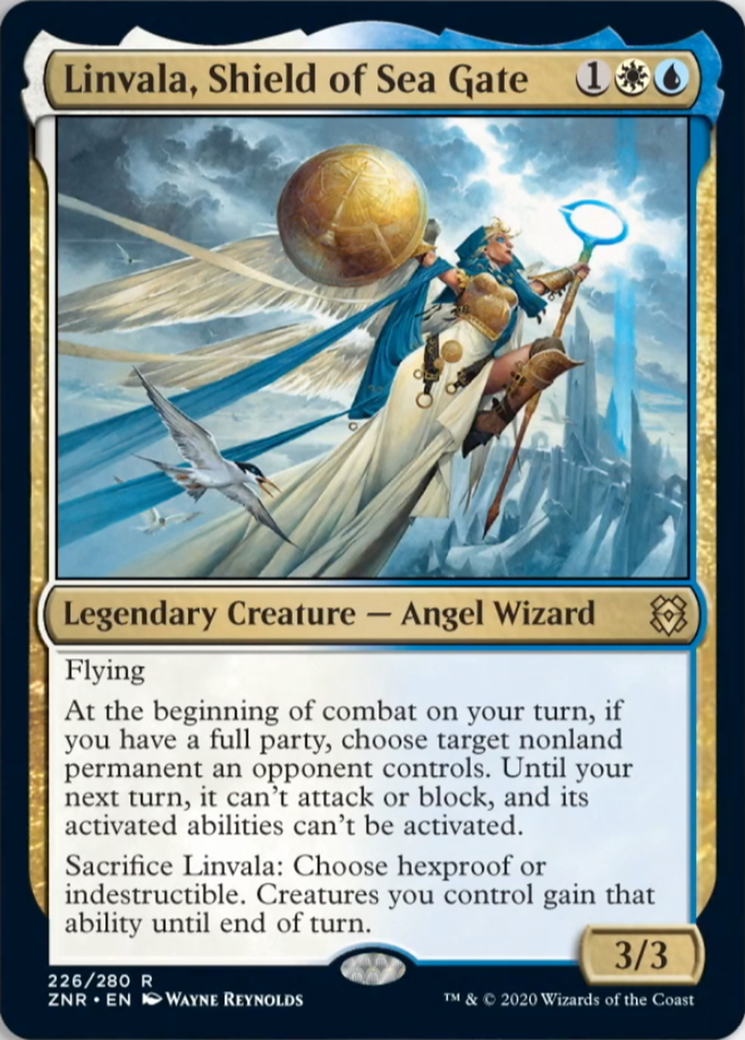 Linvala, Shield of Sea Gate is a truly unfortunate let down that doesn’t do enough to support the colour pair it’s in. Blue and White have historically not been a creature focused colour pair. This card also doesn’t look like it will enable a hatebear or weenie strategy. Linvala, Shield of Sea Gate seems to be a weak start to a Blue/White control deck but doesn’t offer the stopping power or the ability to affect the board in a meaningful way with its first ability. Its second ability is the only part that really supports the strategy with it being a Selfless Spirit in the Command Zone. This is unfortunately insufficient for saving the card and you shouldn’t expect to see it going forward in Commander. Linvala, Shield of Sea Gate will be the last pick for adding an additional Selfless Spirit effect or as a part of a Tazri, Beacon of Unity deck to fill out the Wizard slot. 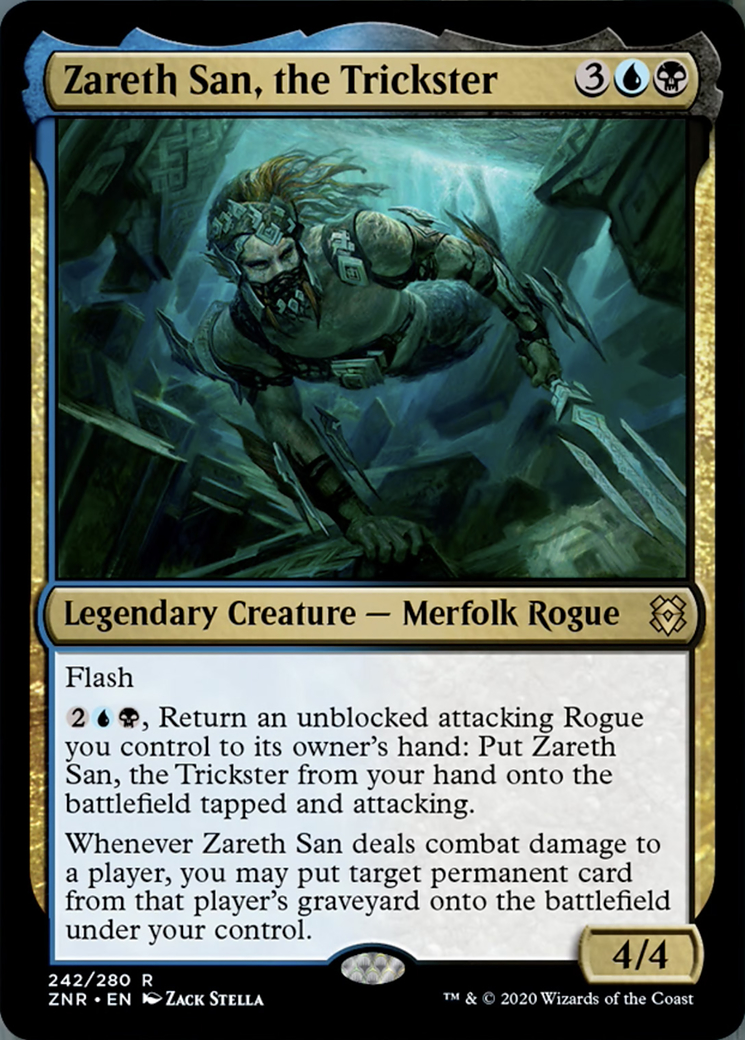 It’s hard to overlook Zareth San, the Trickster being printed right as we receive a new preconstructed ‘Rogues-matter’ deck. As bonus points, this card looks to be a strong contender on its own. The Ninjutsu-like ability allows for sneaky combat tricks if it’s in your hand, though the real upside of this card is what it can do as your Commander. Frequently Blue/Black control decks will suffer to find some sort of efficient win condition that doesn’t cost itself a turn being tapped out or other precious resources. However, this card fills that gap. With Zareth having Flash, the negation of having to tap out to play this threat increases its value dramatically. The fact that it steals your opponents win conditions will certainly be a sight to behold. This is surely designed with the new Rogue deck in mind.

The key downside to Zareth is the need for it to be unblockable. This isn’t a trick that Blue/Black decks are generally known for. It shouldn’t be too overwhelming for most lists but it is certainly a consideration. With the new preconstructed deck, most players will be taking this into a creature-based deck. At that point, you have to ask if Yuriko, the Tiger’s Shadow is just a better Commander for that kind of strategy. Consider this card to be an alternative if that’s the route you wish to go. I expect to see Zareth at a reasonably high number of tables but not necessarily used in the most efficient manner. 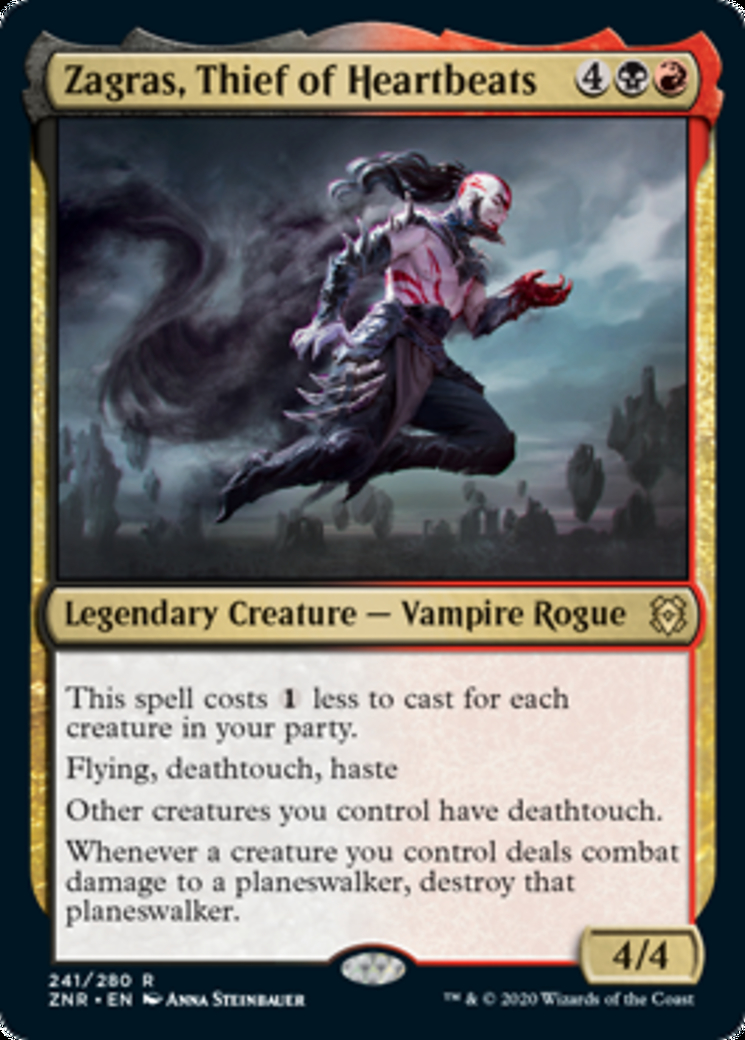 The classic costs too much for minimal board impact. Similar to Linvala, Shield of Sea Gate, Zagras, Thief of Heartbeats colours are too restrictive for the mechanic it wishes to support. This card wants you to have a full party to make it cheaper and more mana efficient to cast. However, Black/Red just isn’t built to support Party decks. I would expect to see this card played in the 99 of potentially Edgar Markov decks that could possibly reduce the cost of this card and take advantage of the pile of text it has. Even then, that doesn’t seem terribly likely.

The only part that keeps Zagras afloat is the fact that it has a lot more text than one would expect. There is potential power in having three keyworded abilities, granting your board a keyword, and then having planeswalker Deathtouch. But as a Commander, it’s hard to see this play out. In the 99 it’s unlikely this will see much play outside of the premier Party Commander Tazri, Beacon of Unity or Edgar Markov Vampire tribal lists. While I am sounding like a broken record after Linvala, Shield of Sea Gate, this is a card that does have much more potential just due to the raw power of the card. Simply finding it a home is where this card will have trouble. 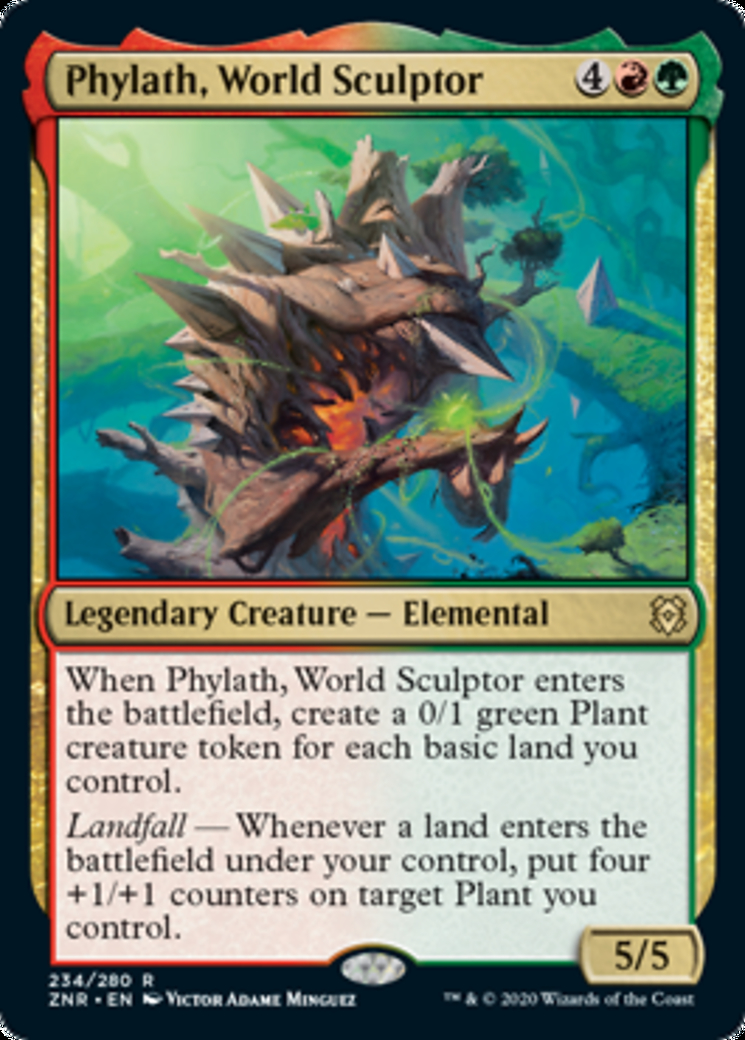 Phylath, World Sculptor is a worse Avenger of Zendikar but has the ability to be placed in the Command Zone. Keeping the card in two colours allows for most players to have access to a high number of basic lands. The Landfall ability only putting counters on a single Plant is certainly a downgrade. Where Phylath shows its power is the fact that every time you cast it, your board will be full again. It’s easy enough to put +1/+1 counters into play, so this plus Craterhoof Behemoth effects will make your deck build itself.

There aren’t too many ways to build this Commander, but given the popularity of Avenger of Zendikar should make you expect to see a few of these decks roaming around. The main downside for Phylath is it won’t see anywhere near the play that Avenger of Zendikar does in the 99 due to its restrictions. Unless built specifically for it, most decks will have to pass up on this effect and have to turn to other six mana bombs which aren’t going to be hard in Green or Red (looking at you Moraug, Fury of Akoum). 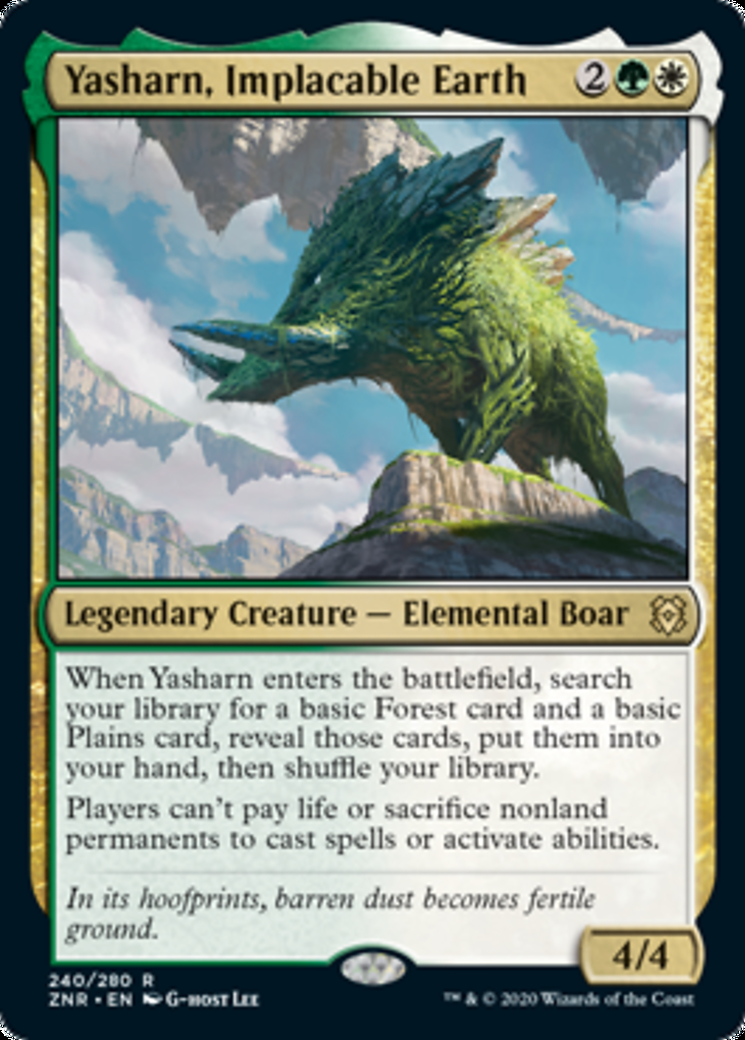 Yasharn, Implacable Earth is unfortunately a mixed bag. It has a strong enough effect to help support a Green/White hatebears deck with some card advantage. However, having the lands go to your hand as opposed to straight on the battlefield makes this far weaker than one would expect. Requiring additional cards for setup that you wouldn’t want to have in a hatebears list makes this a disappointing inclusion. At the same time, it isn’t a bad card. As mentioned before, it is still card advantage with a powerful effect to turn off Korvold, Fae-Cursed King decks or just fetch lands like Windswept Heath and Fabled Passage. It doesn’t quite offer enough to usurp the current hatebear Commanders that are prolific in the format, but it is certainly powerful enough to invite a few newer players into the archetype while being a budget inclusion for the 99 of various lists. 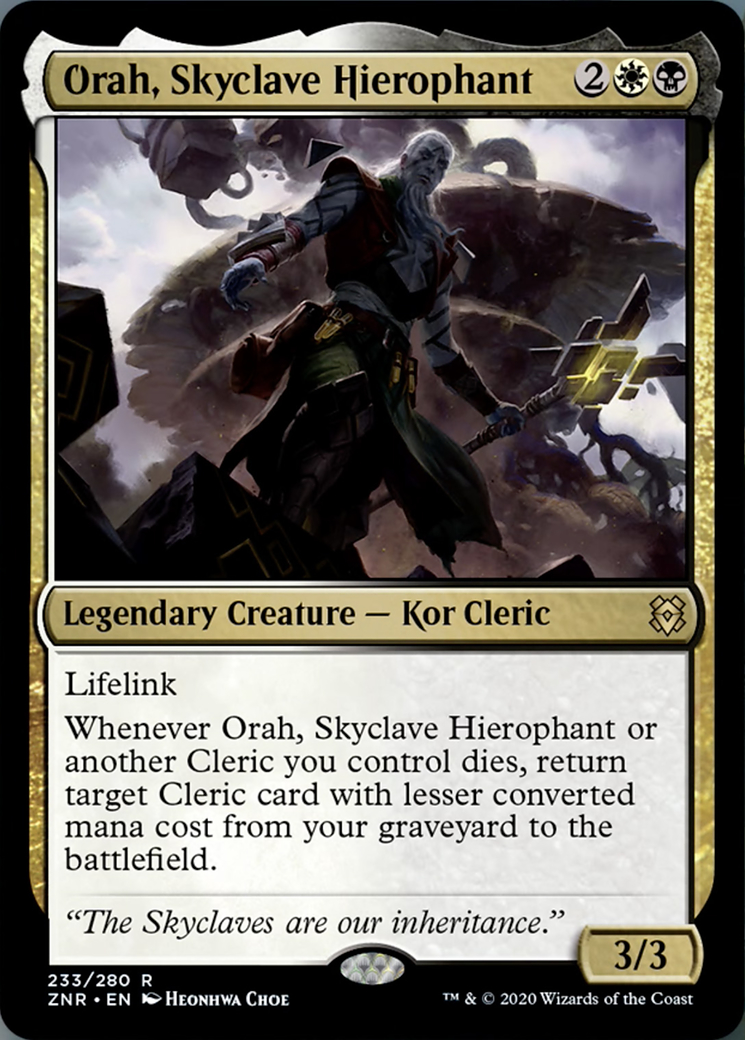 Orah, Skyclave Hierophant sits in a similar boat to Taborax, Hope’s Demise. It’s certainly nice to see new Clerics being printed, though the abilities of this card look to be rather lacking. You can’t diversify your mana costs with Clerics enough to make this card do much better than sometimes return a Shadowborn Apostle from your graveyard. Having such a tight restriction on deck building here just won’t help you flourish from the available card pool. Most of the Cleric-matters cards in the game are just too middle of the road as it currently stands. A 3/3 for four mana with Lifelink isn’t the best and the comparison to Scrap Trawler just isn’t accurate for power level comparisons. I expect this card to see play in fringe lists akin to Taborax, Hope’s Demise, but don’t expect it to make a lasting impact on the format.

Well, that’s the first half of the gold Legendary Creatures for Zendikar Rising. They're not the worst set we’ve seen so far but pretty far from the best. There are certainly a few solid inclusions for casual decks going forward and some big new finishers. Though there's nothing that’s going to have a drastic effect on the format going forward. On the bright side, none of the new Legendary Creatures looks to be expensive. Be sure to pick up even the more casual of them just in case they end up finding a home. That’s the first six out of eleven Multi-Coloured Commanders for the set. Next time we’ll finish the last five creatures and perhaps even the best new Commander in this set will be among them.