The Return of Rayne!

"Target me and you're dead."

An idle threat or a barometer for near future repercussions? If you're running our featured commander, it's the latter. Without further ado, let me introduce a subtle source of card draw fulfillment. 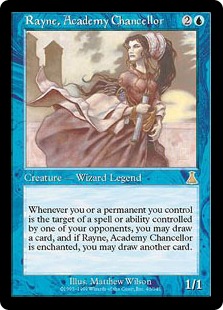 At 1/1 for three, Rayne isn't going to be killing you through commander damage. What she will do is draw cards. First one card when they target her (or one of your lands), then another, then another, until you have obtained massive card selection and can ensure your gameplan. This deck will be largely permanent-based as you need enough "bull's eyes" to get people attacking you on a regular basis. Thus, we'll be playing a variety of creatures (including Morphs), enchantments, artifacts and so on that will force our opponents to either find a board-wipe or lose in a hurry. Let's start by examing the whys and wherefores of our deck choice, though.

Why Rayne rather than Azami, Lady of Scrolls?

The short answer is that this isn't a Laboratory Maniac deck. The long answer is that we want to be proactive at all aspects of the game, and Rayne lets us do this in combat (redirection of our creatures via Maze of Ith, for example), on the stack (Willbender et al.) and even with graveyard shenanigans (Reito Lantern I'm looking at you!). Rayne seems very innocuous at first, but your opponents will quickly learn to counter her or kill her on the spot.

Yes, she will. But when she does you'll draw cards, which let you replace her with more threats. Worth noting is that the spell targeting her is still on the stack when you draw the card, so you can just counterspell it or respond to it with your many permanents. Slapping Pemmin's Aura on her has the double benefit of an extra card drawn and protection from the incoming ability.

What are this deck's routes to victory?

You can infinite Time Stop by using Echo Mage to copy it, Stronghold Machinist to counter the original and then recycling it through Soldevi Digger and Browse.

You can Stasis lock people.

You can just donate everything you have with Clambassadors and Hermetic Study.

You can steal one creature per turn with Vedalken Shackles. turn it blue withAlchor's Tomb then sacrifice it to Homarid Spawning Bed for tokens! Clunky AND fun!

You can draw an absurd amount of cards, which is a victory in itself.

Is this the deck for me?

With that said, here's a decklist!

Oh, that opening statement with the threat? That was a friend's game, where he got targeted with Door to Nothingness, drew a card (an Island) but managed to redirect the ability with Willbender. Laughs ensued!

Enjoy the deck and the aggravation it can bring to your table. Until next time, may your decks Rayne annoyance among your friends.