Welcome all to a special edition of the Daily Dose of Aether Revolt, thanks to some special gifts found on reddit this week. Usually preview season doesn’t start until about a month before a set comes out, but thanks to some posts online this week we have some Aether Revolt preview action to talk about. Today I’m going to be talking about two of the new cards from Aether Revolt which will also be the promotional cards for Aether Revolt Game Day weekend on Feb 11th-12th.

The first card I’m going to show you is a card that fills a gap in Standard for a Black sweeper card. With the loss of Languish after rotation, the main sweeper used was Flaying Tendrils. In Standard, a lot of the early game threats you want to remove have three toughness, like Spell Queller and Sylvan Advocate. So here is Aether Revolt’s answer, Yahenni’s Expertise! 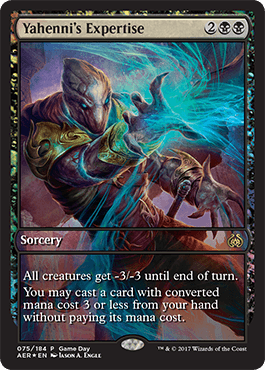 Wow, what a card this is going to be. Let’s take Yahenni’s Expertise and put it into the existing Black/Green Delirium deck that is seeing lots of playing in Standard. Like I talked about earlier, being able to kill three toughness creatures is key for success when playing in Standard, but in this deck, it also won’t kill most of your major threats. Grim Flayer, Mindwrack Demon, and Ishkanah, Grafwidow will all survive.

Now that we know that all the major threats in your deck will survive, let’s turn our focus onto what you will be able to cast for free once this spell resolves. Liliana, the Last Hope will allow you to finish off four toughness threats like opposing Black/Green Delirium creatures and large threats like Archangel Avacyn. If you are left with a pesky Gideon, Ally of Zendikar after clearing the board, you can cast Ruinous Path or To the Slaughter to finish the job. You can even cast another Grim Flayer to add to the battlefield. How about clearing the battlefield and than following up with a Transgress the Mind to remove any threats from your opponent’s hand as well. There are a lot of possibilities for Yahenni’s Expertise and I look forward to playing with this card.

The next preview card I’m going to talk about seems like it is the long lost middle child of a Mage family. In Fifth Dawn, we were introduced to a 2/2 Wizard named Trinket Mage that allowed you to search for an artifact of casting cost 1 or less. In Mirrodin Beseiged, we next saw Treasure Mage, which took care of searching for artifacts of casting cost 6 or greater. Now thanks to Aether Revolt, we have the middle child. Here is Trophy Mage. 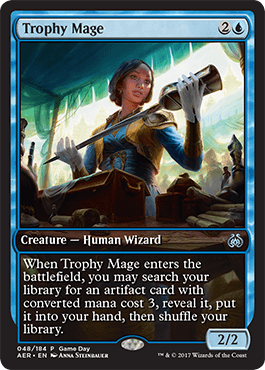 This is a very specific tutor affect, but one that can be very popular. It is a little odd that you are playing Trophy Mage on turn three and you are searching for an artifact that won’t allow you to maximize your mana on turn four. There are a lot of powerful artifacts you can search for in Standard currently. Let’s have a look at some of the best artifacts that you can search for with Trophy Mage.

I could possibly see Trophy Mage being used in a Metalwork Colossus deck that usually plays Cultivator’s Caravan, Deadlock Trap and Foundry Inspector already. The 2/2 body for a three-casting cost creature is not great by itself, but if you can get a piece of the puzzle that will help you in the game, this card could see some play. We should see what three casting cost Artifacts come in Aether Revolt.

It looks like cards with casting cost of three might be an important part of Aether Revolt, but only time will tell once we start to see more preview cards from the new set. Thanks again for reading the Daily Dose of Aether Revolt and I look forward in the coming months previewing Aether Revolt before its release on Jan 20th!