Welcome all to a new week on the Daily Dose of Dominaria, where I’m starting off the week talking about Elves. Not just your ordinary green Elves that we see all the time, but some multicolor Elves as well. Dominaria is bringing us old Elves, new Elves, and everything in between. Elves have always been a creature type that focuses on two things, power in numbers, and ramping up your mana. A couple of weeks ago, when I was talking about green Legendary creatures in Dominaria, I talked about Marwyn, the Nurturer. Marwyn, the Nurturer grew stronger by having power in numbers and ramped up your mana equal to its own power. Three of the Elves I’m going to be talking about today will help you ramp up your mana, while the last Elf just wants to deal some serious damage to your opponent.

First off, I want to talk about an Elf that allows to cheat some cards from your hand onto the battlefield. Here is Llanowar Scout. 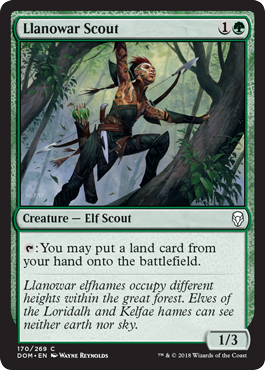 Being able to put a land from your hand onto the battlefield is not an ability we see very often on a creature. It has only happened 4 times before, most recently on Walking Atlas. If you compare putting a land into play versus having a creature that just taps for mana, there are pros and cons for each side of the equation. Being able to put a land onto the battlefield will ensure you have additional mana in future turns even if your creatures dies. There are times though that you will be putting onto the battlefield a land that comes into play tapped, therefore you won’t gain any additional mana from it that turn. If you have no other lands in your hand, this ability does become redundant, as you can just play your land for the turn anyways. There are scenarios where you could use Llanowar Scout’s ability during your opponents turn to surprise them and cast an instant spell when they might have thought you didn’t have the mana to cast it. I’m not a big fan of this ability on a creature, but there are rare scenarios where it could be advantageous.

Most Elves we see are green, but some are multicolored, 11 others to be exact. Dominaria adds two more to that total including Grand Warlord Radha.

There has been a hole in Standard for the past couple of years, and that whole is turn 1 mana accelerants. Long gone are the days of Birds of Paradise and Elvish Mystic. Dominaria brings back an old favorite to Standard. Let’s welcome back Llanowar Elves. 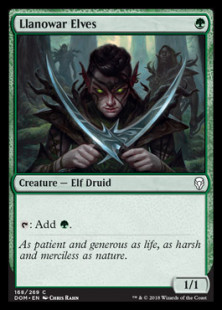 That’s quite a few powerful plays to be playing on turn two. Don’t forget some of the new cards in Dominaria that can be played on turn two with Llanowar Elves, like Marwyn, the Nurturer. The biggest downside to Llanowar Elves is what you do with them when you draw them on turn 6 or later in the game. They are almost a dead card in your hand being a 1/1 creature for one mana with its mana ability basically mute at that point of the game.

Last on the agenda, is an Elf Knight that is going to take advantage of the return of Llanowar Elves. Here is Steel Leaf Champion. 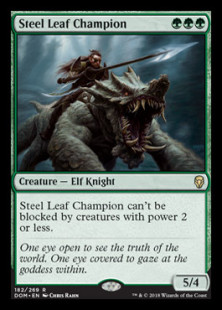 Wow, just wow. A 5/4 creature with an evasive ability for only 3-mana. To make it even better, it’s an Elf Knight, allowing it to work with certain creature synergies. Imagine being able to cast this on turn two thanks to a turn one Llanowar Elves. If your opponent doesn’t have a removal spell to deal with it, the game could be over in four short turns. Most creatures your opponent plays won’t be able to block it in the early game. Even if you must wait until turn three or later to cast it, Steel Leaf Champion is still a strong creature to play at any point of the game. There are currently 5 creatures in Standard with 5 power and have a casting cost of three mana. The difference is, all those creatures either cannot attack until later in the game or those creatures become smaller until you can remove -1/-1 counters from it. Steel Leaf Champion has no drawback other than its casting cost of all green mana and has an evasive ability on it to boot.

Now that you’ve seen what Dominaria can offer when it comes to Elves, what does Standard currently have? There are currently 21 Elves in Standard, but not too many of them are being played in any Standard decks now. Servant of the Conduit is a great ramp choice, but if you want to play an all-Elves deck, you probably won’t have much room for Energy synergy. Rishkar, Peema Renegade is a great creature that pump your creatures and provide extra mana when needed. Rashmi, Eternities Crafter could allow you to make sure you never run out of Elves on the battlefield. Cultivator of Blades could be used to pump all your Elves for an all-out attack. As you can see, there are some cards with potential, but no Elves currently in Standard that knock it out of the park.

Will Elves make a run of it in Standard? Time will tell, but I don’t think there is enough there now to make it happen. What do you think Elves needs to make it a suitable deck for Standard? Thanks again for reading the Daily Dose of Dominaria. Join me again tomorrow on the Daily Dose as I look at those pesky red creatures known as Goblins.