Welcome all to the Daily Dose of Adventures in the Forgotten Realms. Today I’ll be talking about a new Enchantment subtype card called Classes. Dungeons & Dragons characters each have a Class and that helps determine what they can do and what abilities they have. This has been translated into cards that look like a combination of Sagas and Level Up Cards. Class is a new Enchantment subtype in which when you play the Class, it starts with a static ability. As a sorcery, you can spend the mana to level up the class to a higher level, adding new abilities to the Enchantment. This means that the Class Enchantment gets better the more you level it up. Today I’ll be talking about the first seven Monocoloured Class cards, while tomorrow I’ll be talking about the five Multicoloured Class cards.

For each Class I’ll talk about its base ability, Level 2 ability, Level 3 ability, and how beneficial it would be to have multiple copies of the Class in your deck. 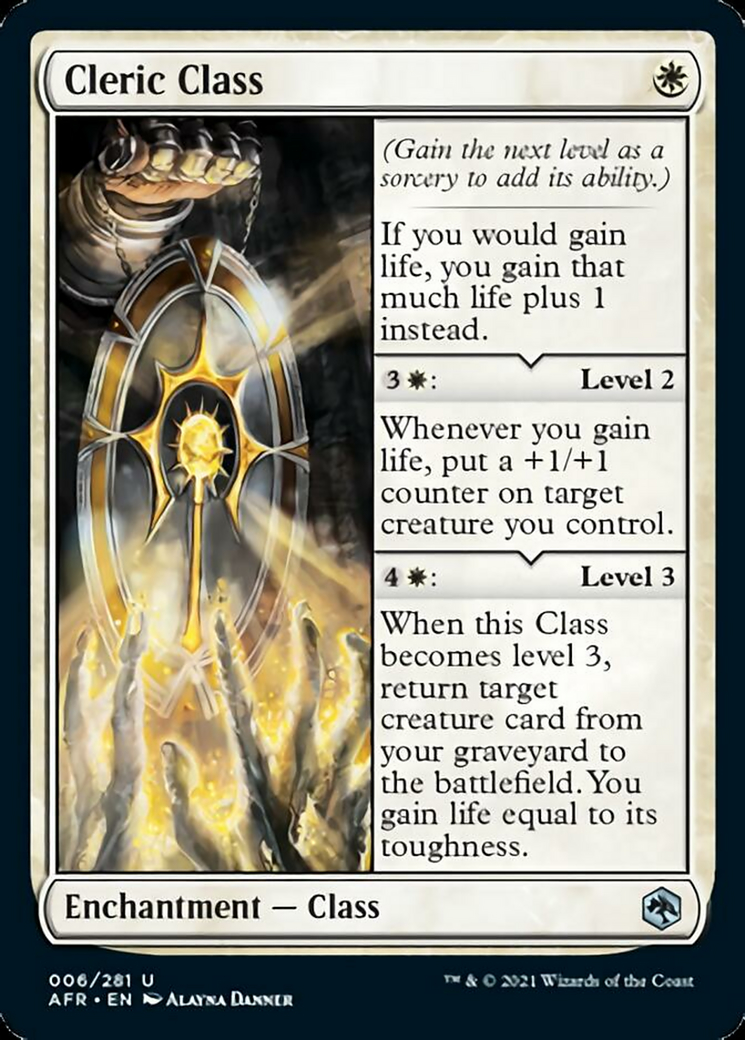 Base Ability – We've seen this ability recently on creatures like Angel of Vitality and Honor Troll. If you have other life gain spells it can start to accumulate life over time but doesn’t provide anything immediately.

Level 2 Ability – We’ve seen the power of this ability as seen on Heliod, Sun Crowned. This ability can snowball and start to take over the game if you can find a way to gain life on a consistent basis. The fact that getting to Level 2 costs four mana though will mean you won’t be able to take advantage of any way you gain life on turns two and three.

Level 3 Ability – I’m a big fan of this ability as you can wait to use it until you have a great target in your graveyard. Once you bring it back onto the battlefield, you'll also gain one extra life and can put a +1/+1 counter on a creature thanks to the first two Levels of this Class.

How good is having multiple copies of this Class? – Having multiple Level 1’s of this class will help you gain more life but won’t trigger extra +1/+1 counters if you have multiple. Levels 2 and 3 though will start providing a ton of value if you are able to level them up appropriately. The reanimation of the Level 3 ability will cost a total of ten mana to achieve, but in multiples will start to cause a stack of triggers to go off and just get better.

Base Ability – This ability has an immediate impact on the game, but its value depends on if your opponent is even wanting to or has cards that they can play during your turn. Making your opponent spend extra mana though on any instant spells during your turn will make them potentially re-think how they play their cards and could provide an advantage.

Level 2 Ability – Any anthem ability is strong if you have a deck built around creatures. Having the ability only cost three mana means it can have an immediate impact if you’ve played a creature on turn two.

Level 3 Ability – After nine total mana you get this powerful ability that you’ll benefit from the more creatures you attack with. This ability lends itself to you trying to do one large alpha attack with all your creatures to try and push through enough damage for the win. It helps that all your other attacking creatures will have +1/+1 from Level 2 of this Class.

How good is having multiple copies of this Class? – I would say that Level 1 of this Class is great in multiples only if your opponent is heavy into either combat tricks, counterspells, or instant speed removal. Levels 2 and 3 of this class though are powerful in multiples. Having multiple anthems just bumps up all your creatures to a higher power level, while having multiple Level 3 abilities on the stack allows you to spread out the power of your attacks. 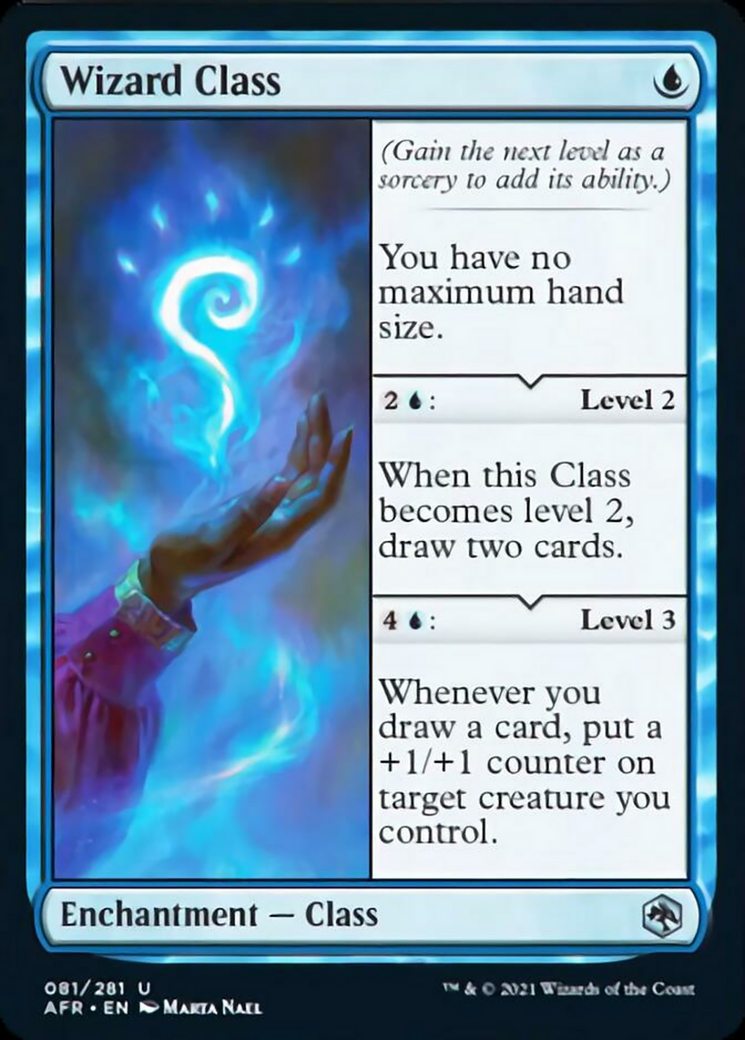 Base Ability – We've seen the power of this ability on cards like Reliquary Tower, Folio of Fancies, and The Magic Mirror. This ability can sometimes be of no value though if you don’t surround it with ways to draw lots of cards.

Level 2 Ability – The way I look at this Class is that for four mana you get to draw two cards. It might be spread out over two turns, but that’s the base way of looking at it. I do like that you can play Wizard Class on turn one or two and draw two cards on turn three.

Level 3 Ability – This will allow you to start growing your creatures with every card you draw, including from your draw step. It’s just unfortunate this ability doesn’t come before you draw two cards in Level 2.

How good is having multiple copies of this Class? – Level 1 doesn’t have any effect with multiple copies on the battlefield, so no value there. Having multiple copies for Level 2 is a great way to gain some card advantage throughout the game. If you already have one Wizard Class at Level 3, you'll gain some +1/+1 counters for each multiple you can get to Level 2. Once you spend the nine mana to get multiple of these Classes to Level 3, each card draw just provides more and more power to your creatures. 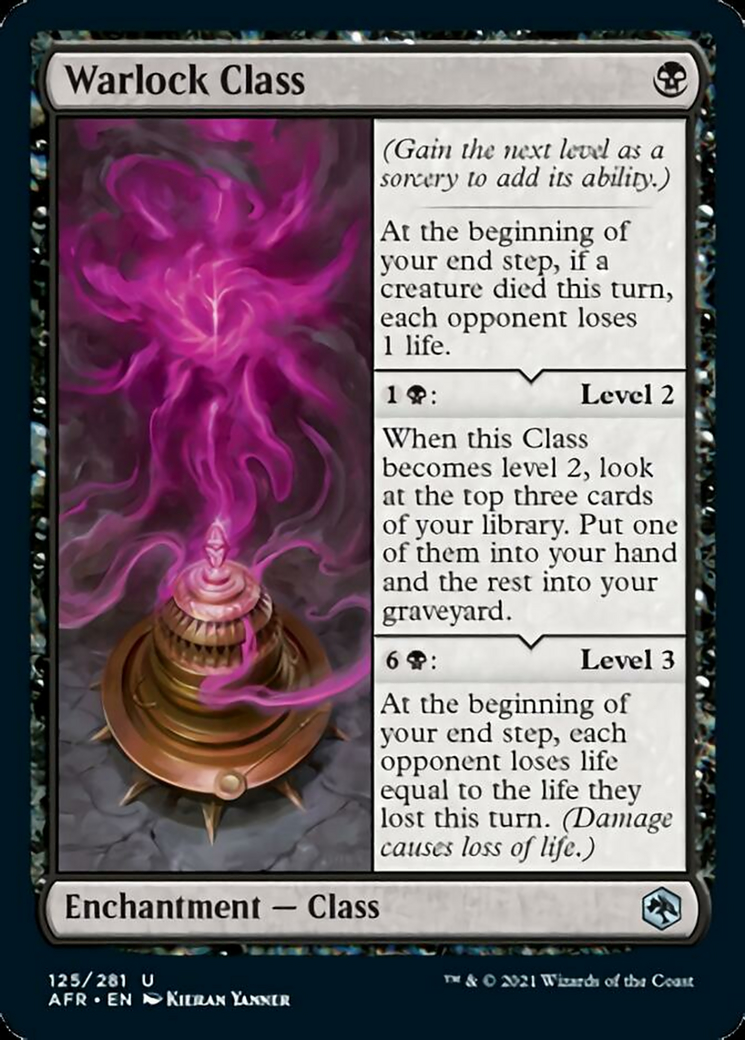 Base Ability – This is an interesting ability that will often not result in anything, but does make trading during combat, or sacrificing your own creatures during your turn more powerful.

Level 2 Ability – I like that this can be used on turn two to get value in both a replacement card and adding cards to your graveyard. If you have graveyard positive cards in your deck, it could be like getting a two-for-one out of this ability.

Level 3 Ability – At ten total mana it takes some work to get to Level 3, but it’s the closest to an ultimate ability on a class that you're going to get. This doubles any life loss during your turn, including that done by the Level 1 ability of Warlock Class itself. This ability can close a game out quickly.

How good is having multiple copies of this Class? – This appears to be one of the better Classes to have in multiples/ Once you have multiple Level 1’s out. the extra one life lost to your opponent could be too much to overcome. Although having one Warlock Class at Level 3 will be tough on your opponent, having multiple will most certainly be lights out for them. 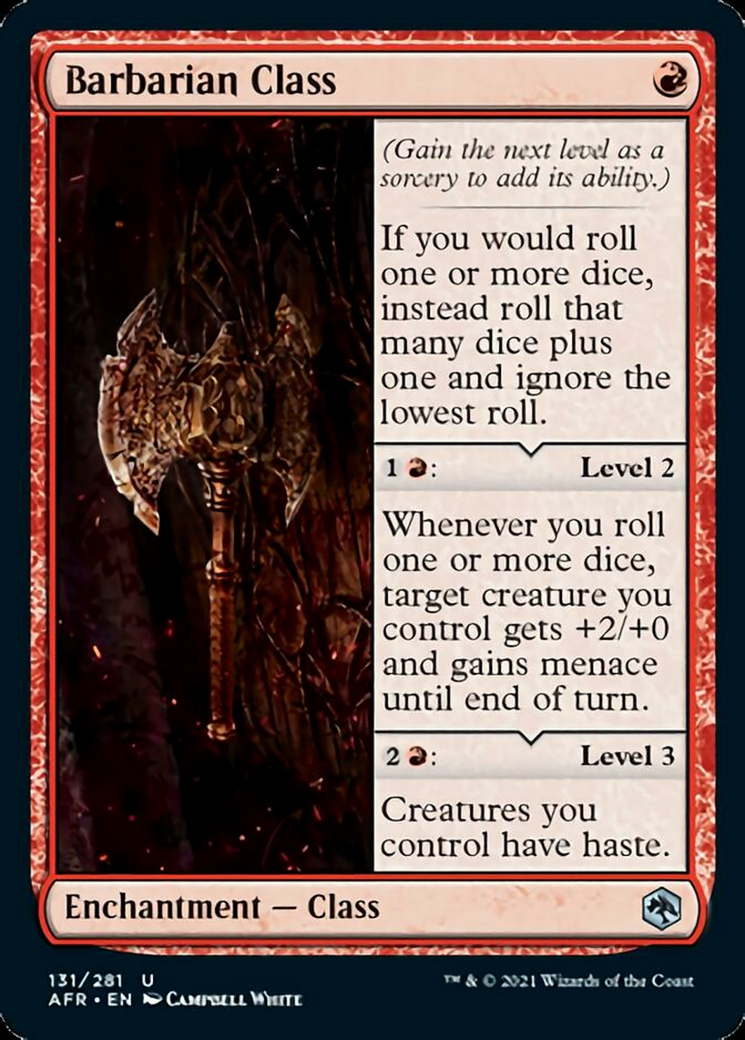 Base Ability – This is a base ability that you 100% percent must have certain cards in your deck to make work. It does nothing by itself but can have an impact if you have multiple cards that want you to roll D20s.

Level 2 Ability – This Level 2 ability goes hand in hand with Level 1, but once again only triggers if you have a card that allows you to roll some dice. In combination though, each time you roll you’ll get to roll two dice instead of one and give a creature +2/+0 and Menace allowing you to get in for a powerful attack of force your opponent to potentially trade two creatures for your one.

Level 3 Ability – Giving all your creatures Haste is powerful, but its value will be dependant on the creatures you give Haste. One of the best parts about this Level 3 ability is that it can potentially be triggered on turn three thanks to its cheap level up mana costs.

How good is having multiple copies of this Class? – This Class seems to be one of the worst to have multiples of on the battlefield. Having multiples of Level 3 won’t accomplish anything. With Levels 1 and 2, there's some bonus in having multiples, but with each one only activating once you roll some dice, it might not provide value that often. 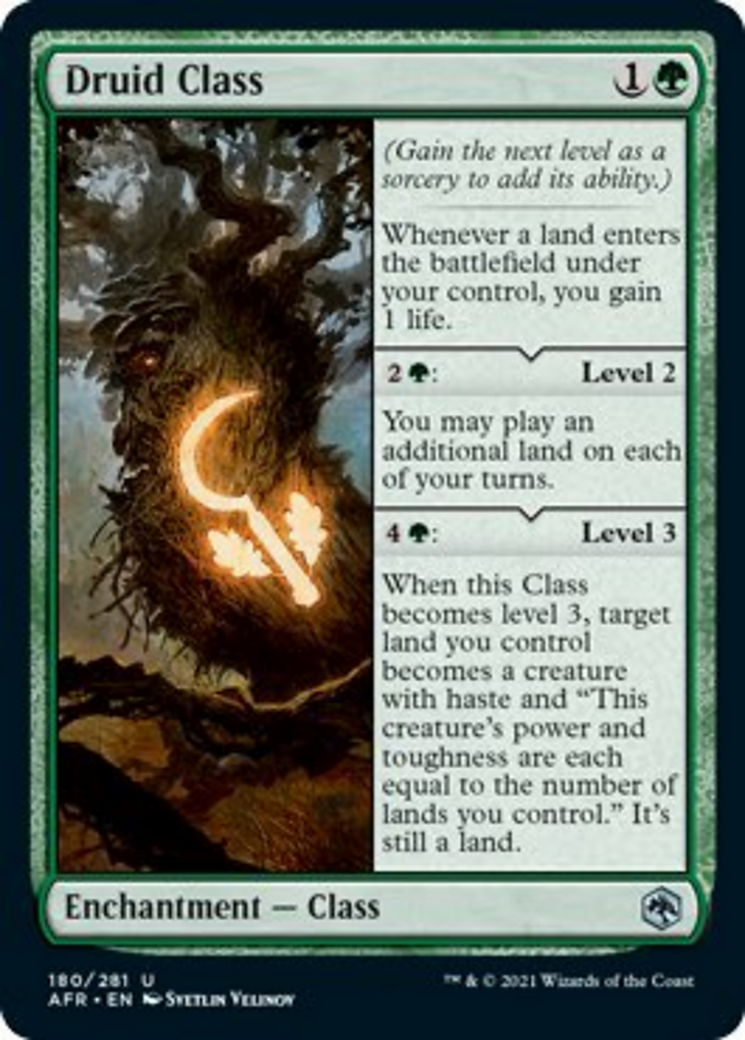 Base Ability – Gaining some extra life each time you play a land is nice. Most times players get between six to eight lands on the battlefield, you'll gain four to six life with this base ability. There are some decks that focus on mana ramp where your life gain could be even higher.

Level 2 Ability – This ability is a fifty-fifty split between good and bad. Ideally, you'd like to Level up into this on turn three, allowing you to play a fourth land immediately.

Level 3 Ability – This is a great Level 3 ability that your opponents need to be aware of. I like that it gains power and toughness for each land you play afterwards.

How good is having multiple copies of this Class? – Level 2 doesn’t benefit from having multiples in play unless you just have a mittful of lands. Having multiple Level 1’s will help you gain extra life, while Level 3 will allow you to create multiple threats with your lands. 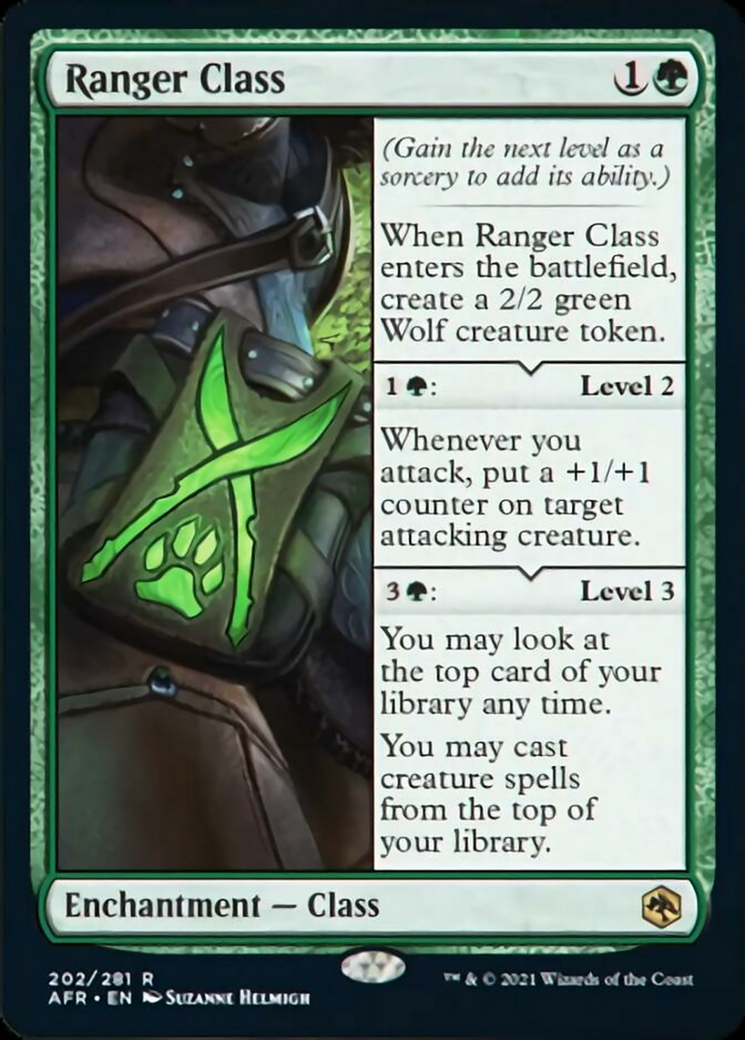 Base Ability – This is a great Level 1 ability to have as it provides something immediately upon casting the Class. A 2/2 for two mana isn’t overly great, but in the context of everything the Class can do it works well.

Level 2 Ability – This ability is cheap enough at two mana that it allows you to Level up the turn after casting Ranger Class. If you can't pump the Wolf, you can immediately pump up an existing creature by spending four mana in one turn to Level it up the turn you cast it.

Level 3 Ability – This is an ability we've seen on a few cards before and is a great way to gain card advantage for a creature heavy deck. Having some knowledge of what's on the top of your library is also useful in helping you manipulate the top of your deck.

How good is having multiple copies of this Class? – Level 1 makes this Class great to have in multiples, giving you something on the battlefield each time you cast it. The Level 2 will allow it so you can add multiple +1/+1 counters on an attacking creature or spread them out across your team. Level 3 doesn’t really benefit from multiple copies, which isn’t the worst and just means you only must spend mana on multiples to get to Level 2.

Classes look to be some of the most powerful additions of new cards from Adventures in the Forgotten Realms and I can’t wait to build decks around them. Some Classes are made to build decks around (Barbarian Class), while other Classes can work in any deck for the colour (Ranger Class). Thanks again for reading the Daily Dose of AFR and join me again tomorrow as a continue my talk on Classes by looking at the 5 Multicoloured enchantments.