Daily Dose of Battle for Zendikar: Top 10 Commons to watch out for in Limited!

Welcome to another edition of the Daily Dose of Battle for Zendikar! It’s Battle for Zendikar prerelease week and everyone is getting excited to open their first packs of the new set. Today we will be talking about 10 commons from the new set that shouldn’t be overlooked when making your decks this weekend. A lot of players go straight for the rares and mythics to see what colors and what kind of deck they will be playing. When you watch experienced sealed players, they often will not look at the rares and mythics until after they have gone through all of the commons and uncommons. So let’s take a look at some of those powerful commons.

First off you get a 4/4 creature for 5 colorless mana which is okay in Limited. Winning in Battle for Zendikar Limited will often come down to who can get their big creatures out the fastest. This will allow you get to those Eldrazi just that much faster.

It’s rare for a white instant pump spell at only one mana to give one of your creatures +2/+2 - Already solid. Preventing all damage from all those colorless creatures going around, even better.

One word, giant Eldrazi. Most of the time in Limited, the player who secures the biggest bomb will win the game. This will make sure that you end up with the biggest creature in all the land. Having this is as an instant makes it a must play. 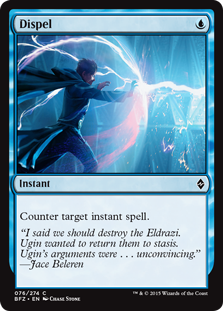 There is nothing worse than being out tricked by your opponent - when you think you have the perfect attack only to be thwarted by an opponent’s spell during combat. Well worry no more, thanks to the makers of Dispel!

Having a late-game large flyer can give you the reach you need to defeat your opponent. Being able to make it a 5/6 flyer almost every turn with Landfall will make it hard to kill. Save some of those Evolving Wild’s for some extra damage.

Kalastria Healer is a card that can help you deal some big life total swings over the course of a game. Right away, you get a 2 point swing when you cast her, but if you are able to take advantage of the ability in an Ally heavy deck, it will do some major damage.

Normally this would not be a card that would see much in Limited play, but there are a few reasons why this is a very important removal card in Battle for Zendikar limited. First off, there are some “creature” lands floating around that could cause some damage. Being able to kill Lumbering Falls before it can activate could win you the game. Secondly, there are a lot of Awaken spells in this format. This means there will be a lot of Land creatures becoming attackers and blockers, meaning this will be a nice removal spell for those pesky terrains. And lastly, it’s an instant. Once again, making instant land destruction is a very rare thing, and its power is not lost on this card.

When you are looking for playables in Limited, you want versatility. This card has that in spades. Not only can you destroy lands just like Volcanic Upheaval, but it also is one of the few cards in Battle for Zendikar Limited that can actually deal with artifacts and enchantments. Look for this to help you get out of a few jams.

Explore and Rampant Growth are two cards that have seen a lot of play in the past. Swell of Growth allows you to both ramp into large creatures quickly and give you a combat trick to boot. If you really want a mana boost to, you can even cast it without the combat trick. (As long as there's a creature on the battlefield to target it with)

I could have included any or all of the Common “spell” lands in this last Common slot. Giving a creature +1/+1 and first strike would be played most of the time as a spell, so throw that onto a land and you have a winner.

Well those have been 10 Common cards from Battle for Zendikar that you should keep an eye out for when playing at your local prerelease this weekend. This has been another edition of the Daily Dose and I look forward to seeing you again tomorrow!