Daily Dose of Dominaria – Angels, Djinns, and Oaths of course

Welcome all to the Daily Dose of Dominaria, where today I’m going to be reviewing some of the remaining cards from Dominaria.

Most of my Daily Dose articles for Dominaria have a theme to them, like green Legendary creatures, sagas, or historic cards. Today I just want to talk about some of the cards I’m excited about but haven’t had the chance to talk about yet. Some of these cards are reprints and some of them are brand new, but they’ll all be in Dominaria. Dominaria has turned out to be one of the most anticipated new sets in quite some time, and the hype train seems to be in full effect.

Today, I’m going to start off with another Oath card. The last Planeswalker Oath card we saw was from Aether Revolt with the Oath of Ajani. Well, there are some new Planeswalkers in town, so let’s make way for Oath of Teferi. 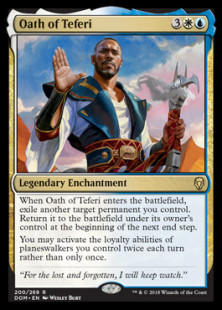 The ability on Oath of Teferi is like what we saw on another card in Dominaria called Sentinel of the Pearl Trident. In that case it was just historic permanents, but with Oath of Teferi you can choose any permanent on the battlefield, including your own lands. If you do blink a land, you can use it again during your opponent's turn to cast spells. Blinking a creature means that you can retrigger its enter the battlefield trigger or turn a tapped attacker into a creature that can block, giving it pseudo vigilance.

That's only half the card, though. Oath of Teferi also lets you use the loyalty abilities of Planeswalkers twice a turn. Here are a few things you could with some Planeswalkers:

Next is a legendary blue creature that has an alternate casting cost if you have an untapped artifact on the battlefield. Here is Zahid, Djinn of the Lamp: 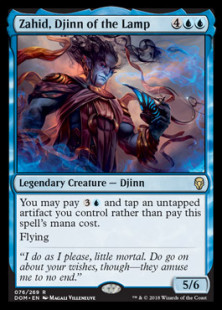 If you’ve been playing Magic for a long time, you will be familiar with the card Mahamoti Djinn. It has the same casting cost, abilities, power, and toughness as Zahid, Djinn of the Lamp. What it doesn’t have, is a way to cheat itself onto the battlefield for only four mana.

Lastly, I want to talk about a pair of Angels from Dominaria. One is a reprint and one is brand new. Let's take a look at Serra Angel and Shalai, Voice of Plenty: 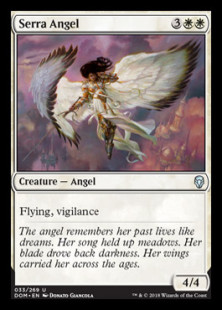 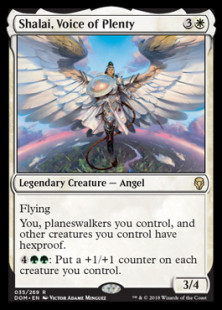 Serra Angel is just a solid creature to have on the battlefield. A 4/4 Flying with Vigilance will allow you to attack each turn, and have a blocker available if needed. All that for five mana is solid.

Which reprint are you most happy to see in Dominaria? It’s nice to see a mix of old and new cards in the same set. It allows you to check in your box of Magic cards to see if you have an older edition of the card that you can fish out to play in Standard.

I have a feeling that I might need to explain to some players what a Mono Artifact is. Thanks again for reading the Daily Dose of Dominaria. Join me again tomorrow as I have a look at some fun new Red cards from Dominaria. I’m talking ones that might not see much play but are still worth a look.