Daily Dose of Dominaria – Best of the Rest

Welcome all to the Daily Dose of Dominaria, where every day I preview some new cards coming up in Dominaria.

As we nearthe end of the preview season, I want to talk about some of the cards from Dominaria that haven’t quite fit into my other articles. There are certain cards that I just can’t not talk about on the Daily Dose. Today I’ll be talking about some spells, some creatures, and an enchantment that can predict the future. There isn’t any more reason to hold off the excitement, let’s jump right into it!

As you might have seen from the multiple articles I wrote on the new historic mechanic, I’m quite excited to get my hands on it. The first card I want to talk about is a non-legendary creature that will benefit you from playing historic spells. Here is Daring Archaeologist: 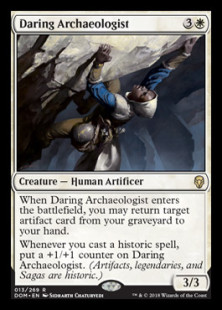 There are a lot of creatures in Dominaria with two lines of abilities like Daring Archaeologist. The card itself would be great with either one of those abilities, yet both are there waiting to be used. To start off, you get to return an artifact from your graveyard to your hand. That's added value just for playing a creature! Returning cards like Mox Amber will be a common occurrence with this card. Plus, you can immediately cast it to turn Daring Archaeologist into a 4/4 creature.

Next up are two blue counterspells from Dominaria. One is new, the other is a reprint, but they’re both playable. Here are Syncopate and Unwind: 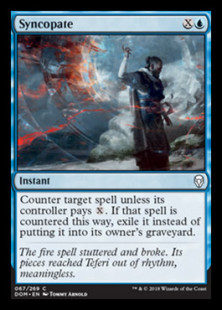 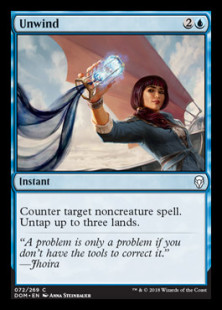 Syncopate has always been one of the most versatile counterspells ever printed. On turn two, you can use it like a Censor. But where Censor gets less useful as a counterspell the longer a game goes on, Syncopate only gets better. Later in the game you can use as much, or as little, mana as needed to counter your opponent's spell. This means that Syncopate never ends up as a dead spell in your hand.

Unwind, on the other hand, is a cross between Negate and a Rewind. Back in the Urza’s sets they printed a set of blue cards that were essentially called “free spells”. This is because after you successfully cast the spell, you got all the mana that you used to cast it back. I didn’t think the time would come where I would see another “free spell” made, but here we are with Unwind. It is weaker that any other “free spell” ever printed, but I think it still has its uses.

I can see a debate starting over using Unwind vs. Negate. I believe that most times you want to cast the cheaper Negate. But if you happen to have other uses for your mana on a consistent basis, you might just want to play Unwind instead.

Have you ever wanted to have more information than your opponent? Well, have I got a card for you! Here is Precognition Field: 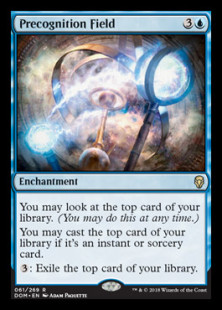 This card becomes even more valuable when you consider the fact that only you can look at the top card of your library. If you leave a card there and don’t exile it before your turn, is it a great card? Can you manipulate the top of your library to be able to cast the card on top of it? Late in the game, will you always be able to draw the card you need? There are many questions to ask with this card, and most times the answer will be yes.

Lastly, I want to touch on a Legendary black creature that has just a little bit of a kicker cost associated with it. Here is Josu Vess, Lich Knight. 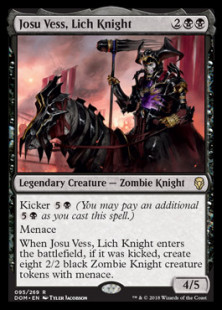 This card is all sorts of awesome. Ignoring its kicker cost, you get a 4/5 Menace creature for only four mana with no drawbacks. Plus, the fact that it’s a Knight creature makes me a happy camper.

Okay, now let’s look at this kicker cost and ability. Six extra mana means that you need to pay 10 mana to kick Josu Vess, Lich Knight. This is doubtful to happen in most games of Standard, but could happen in some drawn out Limited games. But if you do manage to kick it, that's 20 power worth of creatures on the battlefield and an almost guaranteed winning attack the following turn.

Thanks again and I’ll see you tomorrow.