Daily Dose of Dominaria – Run! The Goblins are here!

Welcome all to the Daily Dose of Dominaria, where preview season continues!

Today on the Daily Dose, I’m going to talk about some of our favourite pesky red creatures, Goblins. Goblins have been a part of Magic from the very beginning, so it isn’t a surprise to see them back in Dominaria. Like the Elves I talked about yesterday, there are some new ones and some reprints. Before I get into what Dominaria has in store for us though, I want to have a look at what's currently available in Standard when it comes to Goblins.

Here are the four Goblins currently in Standard that could make the most impact: 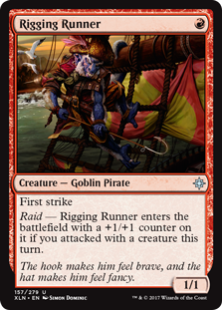 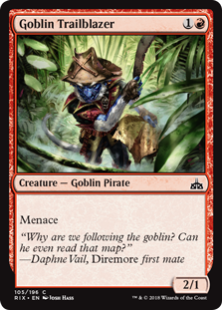 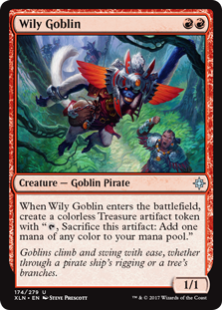 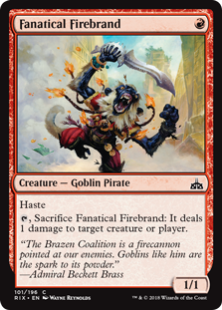 Fanatical Firebrand is a great way to get in some early damage since it has haste. After that you can use it to ping your opponent or finish off an opposing creature. Attacking with a creature like Fanatical Firebrand will make your Rigging Runner a 2/2 first strike creature on turn two rather than a 1/1. Goblin Trailblazer is a creature with a great evasive ability of menace, making it harder to block as it forces your opponent to use two blockers to kill it. Finally, Wily Goblin is a great way to get that mana ramp not usually seen in red to help you get to your four and five-drop creatures one turn earlier.

Now that we’ve seen what we must work with, what is joining the fray from Dominaria? First off, we have a couple of reprints that will go a long way towards making Goblins a real threat on the battlefield. Here are Goblin Warchief and Siege-Gang Commander: 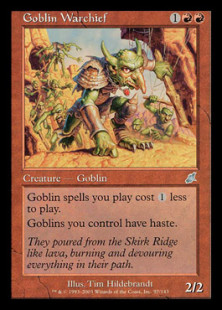 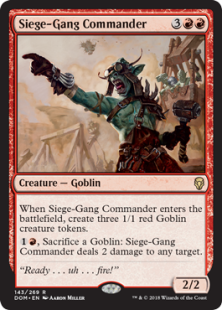 Goblin Warchief has two main abilities: Reducing the cost of mana for Goblins and giving them all haste. Which is more valuable?

Most Goblins have a lower casting cost, which would lead me to believe that being able to give those Goblins haste is more valuable. However, if you do have multiple Goblins to cast in one turn, the mana reduction is key to allowing you to cast them both. The great thing is that you don’t have to choose, and you get the best of both worlds.

Next on the list isn’t a Goblin creature, but a Sorcery that reminds me a bit of the classic card, Goblin Grenade. Let's take a look at Goblin Barrage: 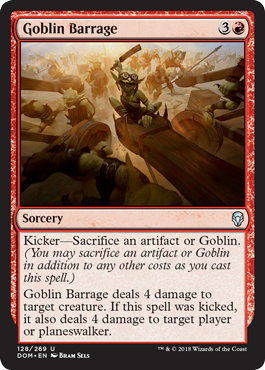 Lastly, I want to talk about what I think is one of the most powerful Goblins in Dominaria. Here is Goblin Chainwhirler: 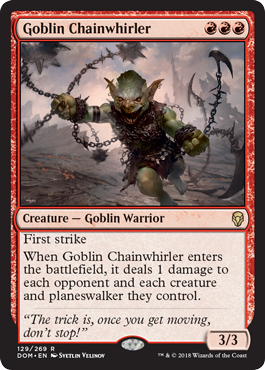 Much like the Steel Leaf Champion I talked about yesterday, here is another powerful three-drop creature. Goblin Chainwhirler’s enter the battlefield ability shows off one of the new rules changes starting with Dominaria. You can no longer redirect damage done to a player onto a planeswalker. However you can now directly target a Planeswalker with a spell or ability if before it could only target a player. That’s why Goblin Chainwhirler lets you deal one damage to your opponent, plus one damage to each planeswalker they control as well. Don’t forget that you can use it to kill smaller creatures or finish off larger ones, since it deals one damage to each creature your opponent controls.

Even without its enter the battlefield ability, you still get a very strong 3/3 first strike creature. The number of creatures previously printed in Magic that have first strike and three power and three toughness for three mana is one. Only Glissa, the Traitor had those stats until Goblin Chainwhirler came along.

And here you have it folks, your favourite group of red creatures are back in play with Dominaria. Do you think there is enough of a base to make a Goblin deck in Standard? I think we're still missing a few pieces, but there is a foundation building that could grow in future sets.

Thanks again for reading the Daily Dose of Dominaria. Join me again tomorrow as I focus on cards from Dominaria that focus on the new keyword, historic. Artifacts, Sagas, and Legendary cards will be making an impact in Dominaria, and these cards will help them get there.