Uncommon cards usually are at the core of making a good deck into a great deck. Rares and Mythics will provide a wow factor for your deck, but uncommon cards are usually some of the strongest creature cards, support cards, and removal cards your deck has to offer. Without further ado, here are the Top 10 Uncommons from Hour of Devastation for prerelease weekend. 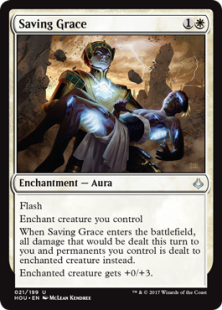 Saving Grace – This takes the power of a combat trick with the bonus of a permanent bonus for your creature. This is a great spell to use in multiple combat situations. You can use it to save one creature by adding three toughness. You can use it to save multiple creatures by having a lot of blockers or attackers who would normally trade, and instead you can throw all the damage onto this one creature. It basically gives all your other creatures indestructible. Lastly, if your opponent tries to do an all-out strike to try and win the game, you can use this like a Fog by dumping all the damage this turn on to a creature. 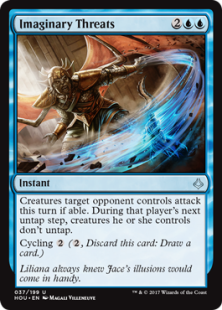 Imaginary Threats – During Limited play, when you want to send in your attackers is often dependant on if you will have good trades during combat. You can force your opponent's hand and block to your advantage. You can also use this to tap down all your opponent’s creatures, like Sleep, to make sure your attackers will be able to get through for lethal damage. Don’t forget this also has Cycling because, you know, why not? 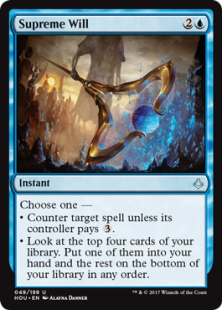 Supreme Will – Versatile cards are always ones you want to put in your deck as they can be played early and late in the game. Early you can use it as a counterspell, where as mid-to-late game you can use it to search for the threat you need to take over the game. 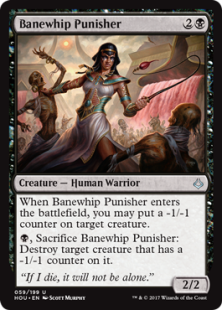 Banewhip Punisher – This creature can be used as a four-mana removal spell, which by itself is still quite nice. Where this creature gets better is when you can kill a one-toughness creature and leave a 2/2 creature still on the battlefield. There could also be situations where your opponent already has a creature with a -1/-1 counter on it and you're able to destroy it and put a -1/-1 counter on a different target creature. 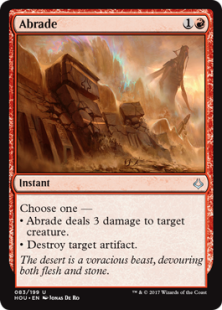 Abrade – Like Supreme Will, this modal card is a versatile removal threat you want to have in your deck. Although there aren't many playable artifacts in Amonkhet limited, the ones that are played are usually game changing. This will allow you to have a main deck artifact removal spell, while still having the versatility to kill creatures as well. 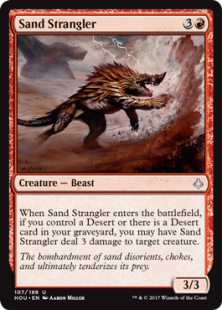 Sand Strangler – I have talked about this card in previous articles as being a very powerful Limited card. Being a two-for-one removal and creature card, you can remove two threats for the price of one. There are so many Deserts kicking around Hour of Devastation packs that it shouldn’t be too difficult to have one in play by turn four to take advantage of this card. 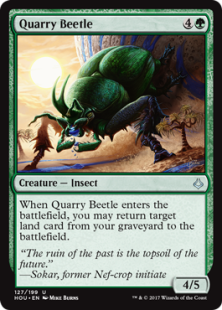 Quarry Beetle – Whether you have an Evolving Wilds from your Amonkhet pack, any of the Cycling lands, or a Desert in your graveyard that you’ve sacrificed, Quarry Beetle will help you get additional value from those lands. To top it off, it has a respectable 4/5 body on it as well. 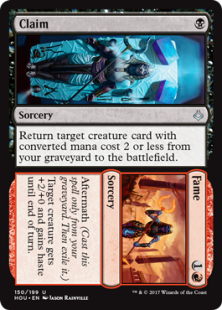 Claim // Fame – In every prerelease event I play in, usually there's someone who plays an aggressive Black/Red deck that crushes me in a game of two because of its incredible speed. Claim // Fame fits perfectly into that deck. You can use it in the mid-to-late game to bring back a dead creature and give it +2/+0 and haste to get in even more damage. 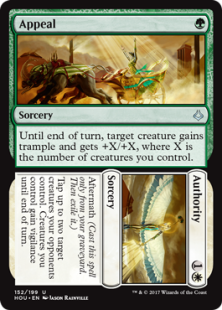 Appeal // Authority – Sometimes, late in a Limited game, it's tough to get damage through on your opponent who might have some small blockers to prevent your big threat from dealing large points of damage. Now you can have one large threat that will have trample as well as be able to tap down their two best blockers, so that if they do want to block they'll be bad blocks. 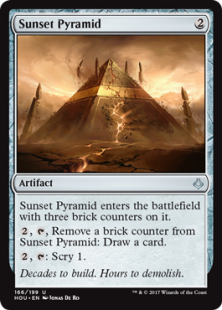 Sunset Pyramid – I enjoy cards that provide continuous card advantage, and Sunset Pyramid doesn’t disappoint. You get three cards for the price of one and once all the brick counters disappear, you can still get card selection thanks to its second ability.

Honorary mentions go to the cycle of five Deserts (Hashep Oasis, Ifnir Deadlands. Ipnu Rivulet, Ramunap Ruins, Shefet Dunes), as they're all very strong, and you should be playing every one that fit the colours your deck is playing.

You now have a foundation of common and uncommon cards in which to draw from when building your 40-card deck for prerelease weekend. Although it is nice to build your deck around a bomb rare that you open in your first pack, remember to lay out all the cards and review every common and uncommon card that you get to find some hidden value that you might not expect. Thanks again for reading the Daily Dose of Hour of Devastation and look forward to seeing you again tomorrow!