Welcome all to the Daily Does of Innistrad Crimson Vow. Today I’ll be talking about a new artifact token made entirely of Blood. Okay, well maybe the new Blood Token is not made entirely of Blood, but the Vampires from Innistrad are looking to use these artifacts to their advantage to grow in power. The Blood Token is a new artifact that can help you with card selection like some tokens we’ve seen in the past, the Shard Token, and the Clue Token. Let’s have a look at what a Blood Token looks like. 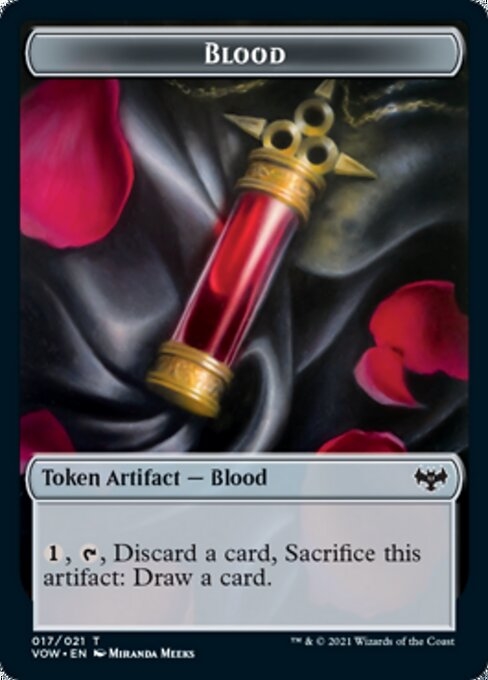 The Blood Token is created by several cards as we will see shortly. First, the token allows you to spend one mana, discard a card, sacrifice the artifact, and draw a card. This will help the player in card selection and is cheaper to activate than a Clue Token or Shard Token, but with the drawback of having to discard a card to activate it. It’s a good thing though that a Blood Token can also be used in more ways. Before I have a look at some new cards, what existing cards in Standard might interact well with a Blood Token?

Briarbridge Tracker – Having a Blood Token will ensure you have a 4/3 Vigilance version of this creature on the battlefield.

Deadly Dispute – Why discard to draw a card when you can sacrifice a Blood Token to draw two cards and create a Treasure Token.

Ingenious Smith – This two-drop creature will grow larger each turn you put a Blood Token onto the battlefield.

Let’s look at some cards from Innistrad Crimson Vow that either make and/or use a Blood Token. First off you need a card that can help you repeatedly create a Blood Token. Here is Voldaren Estate. 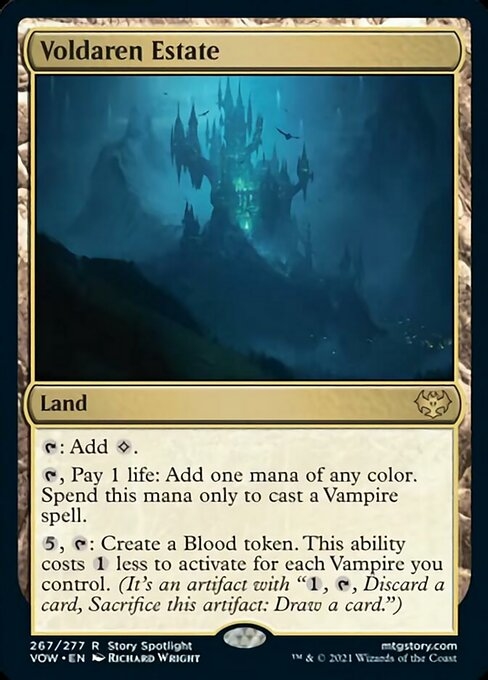 To start off, Voldaren Estate enters the battlefield untapped and can immediately provide you with either colourless or situational coloured mana. It might seem odd that you can tap Voldaren Estate for any colour mana at the cost of one life as you would think that most Vampires are only Black or Red. So why did they decide to allow you to add any coloured mana to cast a Vampire? Well, even in Standard right now there are multicolour Vampires that use either White, Green, or Blue mana. Although there are no mono-coloured Vampires in those colours, it could theoretically come in handy.

The big advantage though is that you can cast a Red or Black one-drop creature on turn one more consistently with Voldaren Estate in your deck. Where it gains even more value is in the late game when you can start to use it as a mana sink to create a Blood Token each turn. The more Vampires you have on the battlefield, the cheaper this ability costs to activate. If you have enough mana you might even be able to sacrifice your Blood Tokens for card selection in the same turn.

Now that we have a way to create a Blood Token, let’s have a look at a card that finds another way to use them. Here is Anje, Maid of Dishonor. 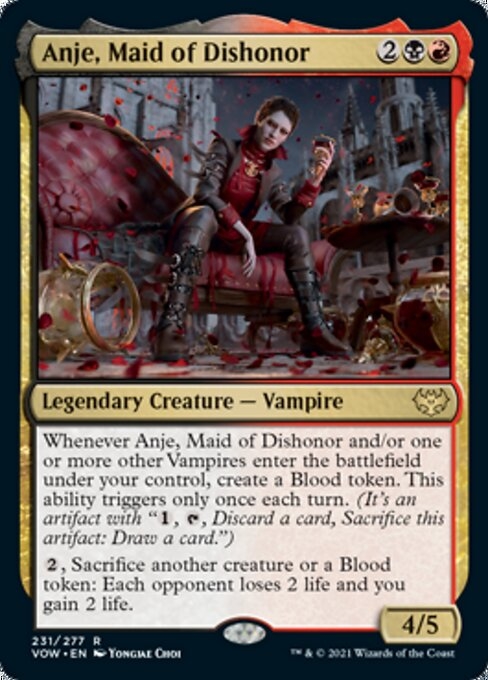 To start off you get a 4/5 Legendary Vampire for only four mana which are some decent stats already. Anje, Maid of Dishonor allows you to create a Blood Token when either itself or another Vampire enters the battlefield. This allows each Vampire you cast to have a bonus card draw effect. I’m a major fan of any card that can improve the value of each other card in your deck. If you don’t need card selection, you can just start throwing each Blood Token at your opponent to drain them for two life. This is a fantastic way to get some reach later in the game from any Blood Token you might have acquired throughout the game.

Finally, I want to talk about a Vampire that can transform a Blood Token into a creature. Here is Voldaren Bloodcaster // Bloodbat Summoner.

To start off you get a 2/1 Flying creature for only two mana. Unlike a card like Vampire Interloper who has the same stats and mana value, you can block with it if needed as well. Where Voldaren Bloodcaster // Bloodbat Summoner gets its true value is when you can transform it. If you can get five or more Blood Tokens you can start to turn them into 2/2 Flying Bat creatures with haste. Over time you will create an army of 2/2 tokens that will put a short clock on your opponent. Voldaren Bloodcaster // Bloodbat Summoner also transforms into a more powerful 3/3 Flying creature allowing you to get in for more damage. It helps that Voldaren Bloodcaster // Bloodbat Summoner can help you create a Blood Token each time a nontoken creature dies. With so many ways in Innistrad Crimson Vow to create a Blood Token, it shouldn’t be that difficult to get five of them and start attacking with some Bats.

It looks like you will have no shortage of uses for the new Blood Token in Innistrad Crimson Vow. When in doubt you can always just sacrifice it to help you draw a card. Thanks again for reading the Daily Dose of Innistrad Crimson Vow. Join me again tomorrow as I take a redacted look at the new Cleave mechanic.