Daily Dose of Kamigawa Neon Dynasty #1 – Welcome back to Kamigawa

Welcome all to another season of the Daily Dose, Kamigawa Neon Dynasty Edition. This new set is mixing some of the old with some of the new in a futuristic Kamigawa that is ready to take Magic to the next step. Today I’ll be talking about two creature types associated with Kamigawa in previous sets, Dragon Spirits, and Ninjas. That’s right, both creature types are returning in this new set and are ready to change Standard and Alchemy in the coming months. Let’s start off Kamigawa Neon Dynasty in style with some sweet new cards.

First up for card reviews is a Red Mythic Dragon Spirit. Here is Atsushi, the Blazing Sky. 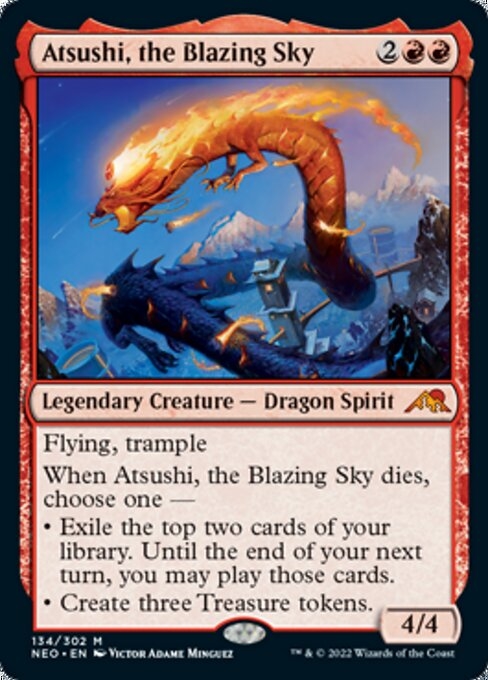 I’m always happy to see a nice Mythic cycle. Each Dragon Spirit will have a trigger that occurs when the creature dies. To start off when you cast Atushi you get a 4/4 flying, trample Dragon Spirit for four mana. This is the cheapest of the Dragon Spirit cycle of Mythics and has great stats and abilities for its mana value.

The second card I want to talk about is a new planeswalker looking to represent Ninjas everywhere. Here is Kaito Shizuki. 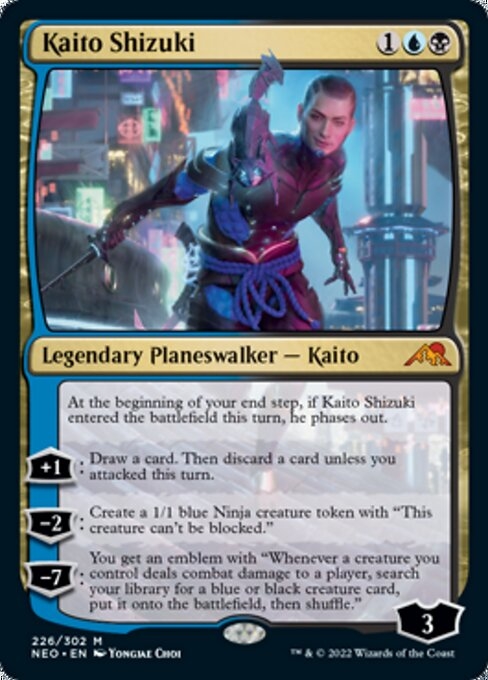 Three mana planeswalkers are always strong and Kaito Shizuki is no exception. Let’s break down the abilities for this planeswalker:

At the beginning of your end step, if Kaito Shizuki entered the battlefield under your control, he phases out. – This is an ability I wish I could see on all planeswalkers to help protect themselves. This will guarantee you two loyalty activations and make it harder for your opponent to kill Kaito Shizuki. With it being phased out for a turn it allows you to untap and be able to protect it with removal and counterspells as well.

[+1]: Draw a card. Then discard a card unless you attacked this turn. – This ability acts as a mini-Chart a Course that works well in a deck that attacks often. This will be the case for a deck like Dimir Ninjas. You can also use the discard ability to your advantage if you have some graveyard or reanimation strategies in your deck.

[-2]: Create a 1/1 blue Ninja creature token with "This creature can't be blocked." – With the Ninjitsu mechanic making a return in Neon Dynasty, having creatures being unblocked will be more important. This allows you to Ninjitsu a creature at the expense of losing your token. This is also another way for Kaito Shizuki to help protect itself from attacks in future turns.

[-7]: You get an emblem with "Whenever a creature you control deals combat damage to a player, search your library for a blue or black creature card, put it onto the battlefield, then shuffle." – This is a great ultimate ability that grows in value with each creature you can deal damage with, but it will take you four-five turns to be able to activate this ultimate ability. You will have to have enough resources in your deck to protect it until that time.

I look forward to building a deck around Ninjas and Kaito Shizuki. It will be interesting to see if there is enough from the set to make a Ninja deck worthwhile. That was your first look at the new world of Kamigawa and what Neon Dynasty has in store for players. Thanks again for reading the Daily Dose and join me again over the next couple of weeks as I continue to investigate all the new cards from the set.