Daily Dose of Magic Origins – Get the Fire Started!

Daily Dose of Magic Origins – Get the Fire Started!

Welcome to another edition of the Daily Dose, where it’s Magic Origins Planeswalker preview week! Today I’ll be looking at the red-hot force that is Chandra, Fire of Kaladesh! This is another one of the five Double Faced Cards (DFCs) that will be in the new Magic Origins set coming out on July 17th!
So far we have seen a one-casting cost Kytheon, and a two-casting cost Jace, so let’s have a look at the next legendary creature of Chandra, Fire of Kaladesh! 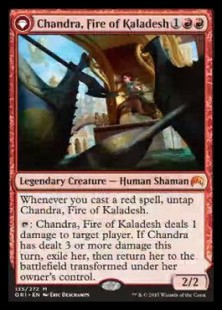 Let’s just take a look at its ability minus the transformation part of it. Kytheon could be indestructible, Jace allowed you to loot cards, and Chandra allows you to ping your opponent’s, in most cases multiple times a turn. Not too bad for a burn strategy, in which this will fit in very well. There is some thought that Chandra might be the hardest to transform, as you need to do 3 damage with her to be able to transform, but remember, not all of the damage needs to be from the ability itself. Let me show you some of the ways to transform Chandra into a planeswalker.

– Cast 2 red spells in one turn. Although mana intensive, this is a possibility with all of the cheap casting cost red creatures and spells going around in Standard right now. Since you will have 4 mana in most cases before you can first activate her ability, this shouldn’t too hard to achieve.
– Attack for 2 damage, and then cast any red spell to untap her, use her ability and transform into planeswalker form.
– Activate her ability. Than cast Fall of the Hammer in response. This will cause Chandra to deal 2 damage to an opponent’s creature, and then her ability will resolve and then Chandra will transform!

Now let’s check out what Chandra, Fire of Kaladesh transforms into, the great Chandra, Roaring Flame! 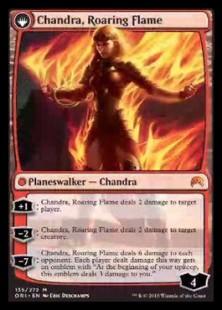 Let’s take a look at her first ability. Having a shock to the face on a planeswalker is pretty powerful. Just remember that in most circumstances you will have already dealt 3 damage to your opponent to transform into Chandra, Roaring Flame, so that’s 5 damage in one turn. To top that off, you will have a 5 loyalty counter planeswalker to boot!
Her second ability is a protect herself ability be being able to pick off small creatures, so that they don’t start attacking her or you. -2 seems quite harsh for this ability, but it is still useful. Would have been nice to see this is a +1, 0, or at worst -1 ability.
Her ultimate ability is definitely a game finisher! Being able to do essentially 9 damage to your opponent, should be able to finish off your opponent, considering all of the damage to them you would have already given them to get to 7 loyalty in the first place.
I can see Chandra being used in not only a Red burn deck, but also a Control deck as well. Protecting her, while dealing 2 damage a turn could be a quick end to your opponent.

Tell me what you think in the comments! Join us again tomorrow, for some more Magic Origins previews!