Daily Dose of Ravnica Allegiance – Time for Simic to Adapt

Welcome everyone to the Daily Dose of Ravnica Allegiance! This week I’ve been going over the new mechanics from the 5 guilds of Ravnica Allegiance. Simic comes to the forefront today with a look into their new mechanic, Adapt. If you think you’ve seen this mechanic before, it is like the Monstrous mechanic that was seen in Theros Block. How it differs this time around is that their will be plenty of cards in the set that take advantage of the +1/+1 counters created with Adapt. Adapt allows you to use it only once per creature, but if there are cards that use those +1/+1 counters as a resource, you can Adapt a creature multiple times.

Before I investigate some of the new Simic cards with Adapt I want to look at a new Simic card that will help you cycle through your deck and help you ramp your mana. Here is Growth Spiral.

This card is very intriguing to me. The easiest comparable card to it is Explore, which both drew you a card and allowed you to play an additional land for the turn. Growth Spiral does basically the same thing but gives you the flexibility of playing it at instant speed. Being able to play this at the end of your opponent’s turn while still holding up many for counterspells or flash creatures makes Growth Spiral powerful. Even just the ability to cycle it and fill up your graveyard could be valuable in certain decks as well, especially if you are working towards transforming a card like Search for Azcanta.

Next is one of the cutest, oddest little creatures I’ve ever seen. Here is Aeromunculus. 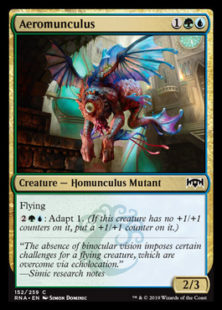 Finally, I want to talk about a card a lot of players have been waiting for since Rivals of Ixalan, the return of Merfolk. Here is Zegana, Utopian Speaker. 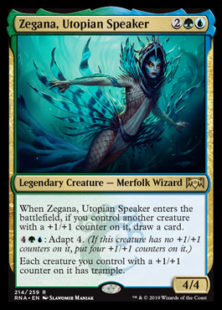 I love this card. With so many explore creatures in green and other Merfolk providing +1/+1 counters, there is a good chance that you will already have a creature on the battlefield with a +1/+1 counter. That gives you a 4/4 creature for four mana that draws you a card when you play it, not too bad at all. It will also help all your other creatures get trample if they have a +1/+1 counter. Now would be a good time to pick up your Hadana’s Climbs if you haven’t picked them up yet. Its Adapt ability is just nuts, as it will turn it into an 8/8 creature with trample. Having this potential threat looming on Zegana, Utopian Speaker, it will become an instant target for your opponent’s removal.

I think the true power of the Adapt mechanic will be determined by two things. One is how far they want to push the number of counters that can be added and second is the synergy those counters will have with other cards in the set. Adapt is an amazing Limited mechanic as you often have more time to be able to activate the Adapt activated ability on a creature. Thanks again for joining me on the Daily Dose. I hope you can come back tomorrow when I talk about a new Orzhov mechanic which will leave you with some extra new friends.